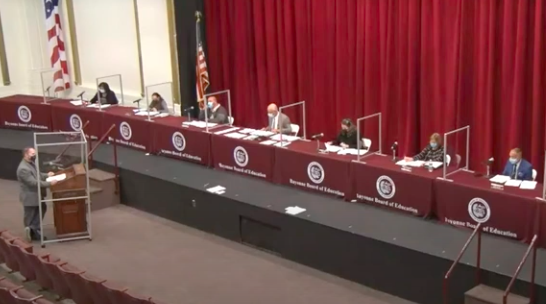 Bayonne Education Association President Gene Woods addressed the board at its October meeting.
×

Bayonne Education Association President Gene Woods addressed the board at its October meeting.

President of the Bayonne Education Association Gene Woods has called on the Board of Education to build new schools to help alleviate the overburdened district.

The discussion was prompted by the approval of the comprehensive maintenance plan for the district by the board at its Oct. 27 meeting. Wood first questioned which schools were going to be addressed for that plan.

In response, School Business Administrator Daniel Castles said the plan is an annual report of actual maintenance costs from the previous year, budgeted costs for the current year, and the planned budget for maintenance costs in the future, required by the state Department of Education.

Woods said the maintenance is much needed on the existing schools, but called for the construction of new schools.

“All of us have talked about the need in the district for more schools,” Woods said. “Our schools are becoming overcrowded. They have been for the last few years and we have 10,000 plus students in the district.”

“It’s great you know we’re getting St. Andrew’s,” Woods said. “Obviously Marist fell through for the thousand reasons that the district couldn’t take care of there. But our town does need to build more schools, another big school.”

“Since we have a lot of development in the town, I talked about the possibility of maybe getting these developers together and let them finance and build one of the schools,” Woods said. “Treat it like Nascar, put their label all over it.”

This idea isn’t new. Originally, officials said there were plans for a developer to help construct a school at Marist that fell through before the board decided to stop pursuing the option due to cost. Regardless of how it gets done, Woods said the district needs more school.

“We’re getting more students because people love our district,” Woods said. “Our schools are great. Our teachers are awesome. So it just it’s something that is necessary. I appreciate that we’re moving forward in some of that, but hopefully we can get more things built in in the district.”

Sires looks to Biden win after his own primary victory