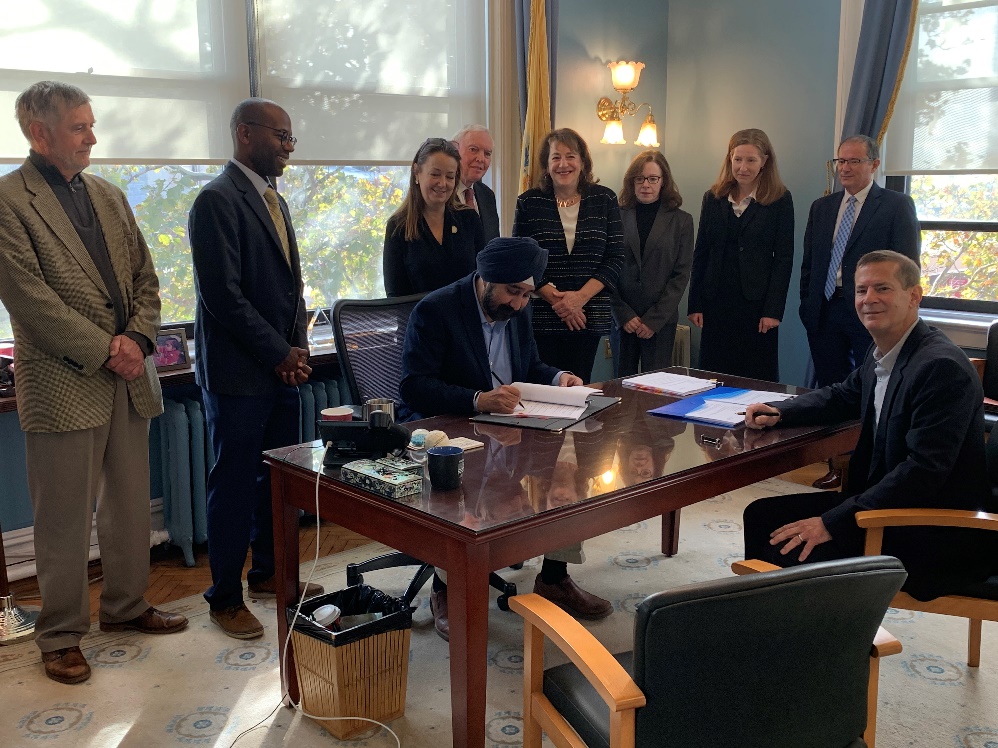 The closing officially ends years of litigation and transfers two properties to the City for public open space.

“This closing marks a joyous and historic day for the City of Hoboken,” said Mayor Ravi S. Bhalla. “Acquiring the Monarch site along the waterfront has been a decade-long endeavor of two administrations, tireless waterfront advocates, and countless council people past and present. This landmark land swap agreement is an unequivocal win for the City.

“It allows the City to preserve public access to our waterfront, obtain waterfront land for public open space, acquire 1.45 acres of land for a future resiliency park in western Hoboken, and it allows the developer to revitalize the current site of our public works facility, adding vibrancy to downtown Hoboken. Residents and future generations will reap the benefits of this truly momentous deal for years to come. Thank you to all the parties involved for working together to make this agreement a reality.”

The waterfront property known as the “Monarch site,” located in northeastern Hoboken near 15th Street and Shipyard Lane, was one of the last remaining missing pieces of Hoboken’s Hudson River Waterfront Walkway. Now, through this acquisition, the City will preserve public access to the waterfront and, in the future, turn the property into public open space instead of two 11-story residential towers as the developer had intended.

With the official closing, the City will now begin the process of designing a resiliency park on 1.45 acres of newly acquired land at 800 Monroe St.

In the coming weeks, the City will release a Request for Proposals for a project consultant that will assist the City in an open public planning process for the design of the park that will incorporate both above and below-ground infrastructure to mitigate area flooding caused by heavy rain events. The City intends to launch the public planning process in early 2022.

Before the end of the year, the City will install a crushed stone cap, funded by Ironstate as part of the land swap agreement, which will alleviate on-site ponding. The City will also work with the Hoboken Arts Advisory Committee to find local artists to wrap the property with public art displays.

As part of the signed agreement, Ironstate will acquire the City’s public works facility at 256 Observer Hwy. The developer will revitalize the property into a mixed-use development with roughly 30,000 square feet of commercial space and 360 residential units, including 40 affordable housing units. The development will also include a 60,000-gallon stormwater detention tank to help mitigate area flooding caused by heavy rain events.

The City now has three years to vacate the public works facility and it is currently exploring options for property acquisition in the North End Rehabilitation Area. The City intends to create a future state-of-the-art public works facility with a City Hall annex, expanded office space for the Hoboken Parking Utility, and an Office of Emergency Management Command Center in the North End Rehabilitation Area.

Additionally, as stipulated in the signed agreement, the City has received $3.5 million from Ironstate Development Company. The City could also receive an extra $500,000 if the City vacates the public works facility within two years.