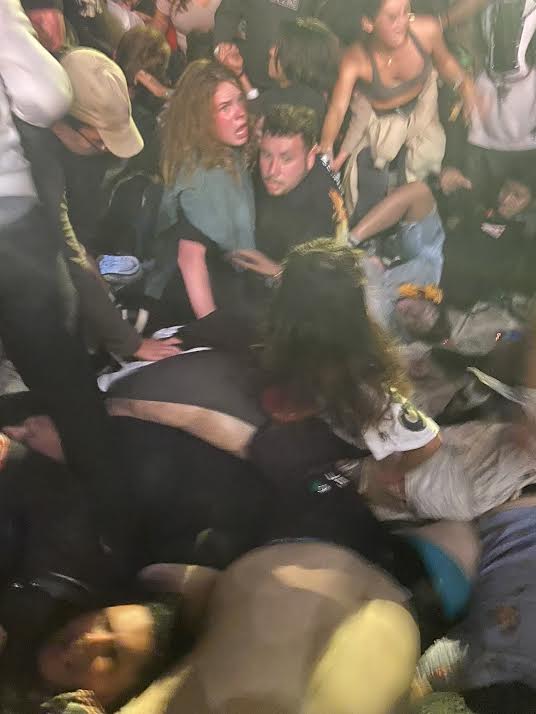 A photo posted to Twitter shows piles of trapped concertgoers on the ground at Astroworld.
×

A photo posted to Twitter shows piles of trapped concertgoers on the ground at Astroworld.

U.S. Rep. Bill Pascrell, Jr., a self-proclaimed watchdog of the live events ticket market in Congress, has expressed sorrow for the loss of life and injury at the Astroworld Festival put on by Live Nation Entertainment.

“I am shocked and devastated by the death and injuries at Astroworld and I feel for the victims and their families,” said Pascrell, who represents the 9th Congressional District of New Jersey, which includes Secaucus and Kearny. “The scale of destruction is unfathomable and organizers have a lot of questions to answer about why they were ill prepared for what happened.”

A tragedy in Houston

The deadly music festival on Nov. 5 at NRG Park in Houston was headlined by founder and rapper Travis Scott. According to first-hand recollections of those at the concert, things started to turn deadly when a thirty-minute timer was displayed on the screen on the stage ahead of Scott’s performance. The crowd pushed forward toward the stage with each passing minute, crushing people under the sheer weight of the audience. That, coupled with limited air, caused many to pass out.

As concertgoers passed out, they were crushed and trampled by the immovable crowd, many of whom were trying to escape the densely packed sea of people themselves. Hours before the chaos, a surge of people rushed an entrance gate, toppling barricades and bypassing security measures. The unchecked mass of concertgoers flowed into the festival unchecked, potentially contributing to the overcrowded nature of the show.

In total, eight people have died so far and over 300 hundred were injured and treated at a field hospital set up near the venue. The victims who died at the festival include: John Hilgert, 14; Brianna Rodriguez, 16; Franco Patino, 21; Jacob Jurinek, 20; Danish Baig, 27; Axel Acosta, 21; Rodolfo Pena, 23; and Madison Dubiski, 23. Approximately 25 people were sent to nearby hospitals, including 9-year-old Ezra Blount who was trampled by the crowd after falling from his father’s shoulders when his father passed out in the crowd. Some are still hospitalized in critical condition, according to Mayor Sylvester Turner.

‘Straight out of hell’

Many of those who survived the festival described it as a “concert from hell.” Horrifying videos plastered over social media show literal piles of people, sometimes two bodies deep, trapped on the ground while Scott performs in the background. Video clips show people pulling each other over barriers to escape the crush of the crowd surge to the tune of Scott’s music. Other footage shows paramedics performing CPR on multiple people while the show rages on in the background.

Many clips show the audience chanting for Scott to stop the show, with audible screams of pure terror from the crowd during his set. However, he did not fully stop the show, only breaking two or three times to allow paramedics to assist affected members of the audience. But even then, he continued to perform. Multiple videos show Scott looking directly at a lifeless concertgoer being carried away by security while continuing to sing. The concert was declared a “mass casualty event” by the Houston Police Department at approximately 9:40 p.m., but Scott continued to perform until approximately 10:10 p.m.

Scott has since issued an apology, claiming he was unaware anyone had died until after the show. He offered his condolences and will cover the funeral expenses of those who died. However, lawsuits have already begun piling in against Scott, Live Nation, and other acts and entities involved with Astroworld.

Authorities are still looking into what caused the crowd surge, with the Federal Bureau of Investigation (FBI) assisting local law enforcement with the criminal investigation in Houston. According to officials, all leads are being pursued including the possibility that drugs played a part in the deadly crowd surge. One security guard was allegedly pricked with a needle while trying to restrain a member of the crowd, and was later treated with Narcan.

Break up the ‘monopoly’

Many are calling the tragedy preventable, with Scott allegedly ignoring multiple warning signs including a verbal advisory from the Houston Police Chief Troy Finner regarding his concerns over “public safety” and the “crowd’s energy.”

Pascrell has asserted this, also stating that some festival organizers may have been afraid to speak up due to the perceived backlash they would receive from Live Nation.

Pascrell continued: “For over a decade, Live Nation and its Ticketmaster partners have held absolute power over the live events market. The costs for fans, while largely financial, apparently may also include physical harm as well.”

Pascrell, who called Live Nation a monopoly, urged for the corporation to face consequences for its action relating to Astroworld.

“Live Nation should be broken up so they might focus on people as much as they do profits,” Pascrell said.

Pascrell has frequently led calls in the House of Representatives for regulation of the live events ticket market. Pascrell was an early critic of the Live Nation-Ticketmaster merger, and repeatedly urged the Obama administration to reject it, warning that the union would crush competition and harm consumers.

In 2018, Reps. Pascrell and Frank Pallone, Jr. wrote a letter to Federal Trade Commission chairman Joseph Simons highlighting a Government Accountability Office (GAO) study which found a myriad of consumer protection and competition issues in the primary and secondary live event ticket markets. The GAO report was commissioned in response to Pallone and Pascrell’s work, and the members urged Simons to do more to protect consumers in the marketplace. In response, the FTC organized a workshop on event tickets held in June 2019 to review many of the challenges faced by ticket-buying fans.

In April 2020, Reps. Pascrell and Katie Porter blistered Live Nation for refused to provide full refunds to customers for events cancelled by the pandemic. Following the members’ letter, Live Nation issued many refunds.

Pascrell is the principal sponsor of the BOSS Act, legislation that aims to impose greater transparency upon the ticket industry so fans have a fair chance to purchase tickets on the primary market. The bill also seeks to protect consumers who choose to use the secondary market to purchase tickets.

The legislation is currently being considered by the Energy and Commerce Committee. The bill is available to read online at https://pascrell.house.gov/UploadedFiles/BOSS.pdf.