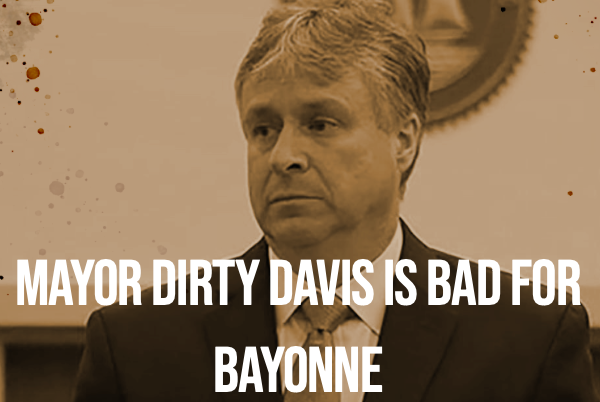 An attack ad has been following Mayor James Davis around Bayonne, and now has popped on an Atlantic City billboard as officials from around the state pass it on their way to the League of Municipalities convention.

Phil Swibinski, a spokesperson for Davis, fired back at the attack ad, predicting the campaign will have zero impact.

“Whoever is behind this dark money, out-of-towner led plot to take over Bayonne clearly doesn’t know what they’re doing,” Swibinski said, “because spending this kind of money on a billboard in Atlantic City to impress lobbyists and politicians will have as much impact on this election as their last failed stunt at the Bayonne High School homecoming game that backfired badly and enraged parents.”

The billboard dubbing the mayor “Dirty Davis” and attacking him on a number of issues popped up beside a main road into Atlantic City this week, amid the annual gathering of politicians, lobbyists and their associates known as the League of Municipalities. The billboard is located after the toll booth at the Atlantic City Expressway.

The ad on the billboard reads: “Dirty streets. Dirty behavior. Dirty politics. Had enough? Call Mayor Davis at 201-858-6010 and tell him to stop making Bayonne dirty. Learn more at dirtydavis.com.” Davis’s face is superimposed on the screen, as well as a newspaper headline regarding the gender discrimination lawsuit filed by Business Administrator Melissa Mathews.

The billboard was paid for by the Citizens for Strength & Security Fund, a Washington D.C.- based Super PAC. In October, the same PAC launched dirtydavis.com and a similar ad which was played on a video truck at the Bayonne High School homecoming football game.

In that ad, Davis is criticized over the garbage contract which was awarded to an alleged donor, although that donation was allegedly later rescinded. He is also criticized for the gender discrimination and sexting lawsuits against him, the city, and other officials; and the water contract with SUEZ, among other issues.

Swibinski continued: “Real Bayonne residents know that the city is moving forward thanks to Mayor Davis, because they can see the progress right in their own neighborhoods without being told what to think by a big money Super PAC.”

The ad comes ahead of the May 2022 municipal elections in Bayonne, when Davis will be seeking a third term. He is currently running unopposed, however, it is widely speculated that City Council President Sharon Ashe-Nadrowski will challenge him.

Ashe-Nadrowski successfully ran on a ticket with Davis in both 2014 and 2018, but has not announced for 2022. Davis has not yet announced any  ticket for 2022 either.