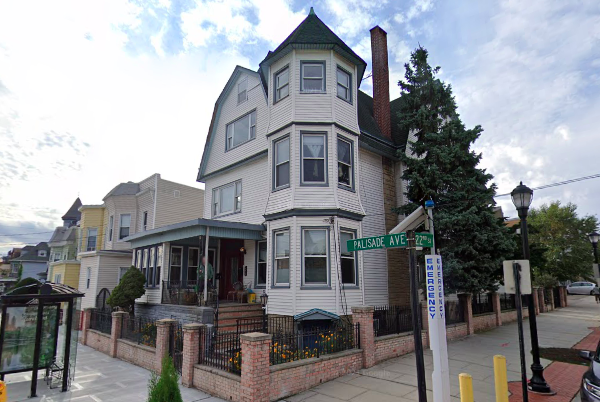 The current residential building at 2113-2115 Palisades Avenue is set to be demolished. Image via Google Maps
×

The current residential building at 2113-2115 Palisades Avenue is set to be demolished. Image via Google Maps

Palisades Vista, LLC has filed suit against the Union City Planning Board after denying its application to construct a redevelopment in the city.

The current site is three and a half story residential building that is slated to be demolished. Each of the two multi-family homes will be four stories, with parking on the first structure, and three residential units on each floor above.

The board voted unanimously to deny the application, which first sought to subdivide the lot into two, to conform with the city’s zoning ordinance regarding lot sizes. Additionally, the building is located inside the residential zone that allows for one, two, and three family homes.

According to the suit, the redeveloper met with city professionals at a technical review meeting where the city asked the redeveloper to modify the plans which triggered the need for variances from the original zoning for a side yard and for parking.

The suit alleges redeveloper abided by the changes and submitted the modified plans to the board. However, they reserved the right to apply with the original conforming application, which is what they went forward with.

A hearing was held on July 27 of this year for that application. At the hearing, Union City and Weehawken residents alike spoke out about the project, stating that it would alter the character of the neighborhood which sits near the border of both municipalities. Mayor Brian Stack agreed, at the time echoing residents that it was “too big” for the area, but suggested that it may work elsewhere in Union City.

Earlier in the year, the planning board passed a measure limiting the height of future developments to three stories. However, this doesn’t apply to Palisades Vista since they submitted an application prior to the adoption of the ordinance.

Following the hearing, the board denied the request for the application citing resident concerns about its impact on the neighborhood. A resolution memorializing the denial was adopted at the board’s meeting in September.

The suit seeks an order voiding the resolution, approving the site plan application, directing the city to issue the requested permits, and paying the redeveloper the cost of the suit and attorney fees.

Board Counsel Brian Chewcaskie did not respond to a request for comment.