‘DANCE Around New Jersey’ through Covid and Beyond 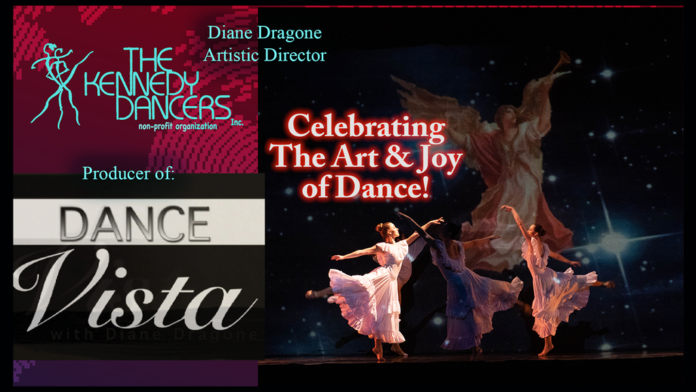 Diane Dragone, host of DANCE VISTA and Artistic Director of the Kennedy Dancers presents a Video tour of four exciting Dance Companies, and a Pre-Professional company from New Jersey.

First is the Art of Motion Dance Theater, directed by Lynn Needle and Olivia Galgano, which is committed to a unique artistic vision celebrating collaboration, legend, myth, and nature.

Following the Art Of Motion Dance Theater is the Mosaic Dance Theater Company, Producing/Artistic Director Morgiana Celeste Varricchio, which is dedicated to the dance and folkloric traditions of the Mediterranean — North Africa, the Middle East, and Southern Europe.

Finally, the Carolyn Dorfman Dance Company, under the direction of Ms. Dorfman, connects life and dance in bold, athletic, and dramatic works.

Some of the young students of The Kennedy Dancers are showcased in their costumes during our Halloween Party & Dance Class.

The Dance Vista cable television series is a catalyst to exponentially grow capacity and interaction with the art of dance to our viewers, live audiences, and students, and has received 6 cable television network awards for cultural programming.

Dance Vista is directed and produced by Tom Horan and Executive Producer Diane Dragone. Dance Vista reaches over 6 million viewers and is seen on television Access Systems in 22 states across the United States.

Fridays at 9:00pm and Sundays at 10:00pm on JCETV located on Comcast Channel 97 in Jersey City, and on Verizon FIOS Channel 43 throughout Northern New Jersey.

DANCE VISTA can also be seen on Manhattan Neighborhood Network’s Lifestyle Channel 2 on Tuesdays at 3:30pm

For your convenience, you can also view it on YouTube at youtu.be/7cCHy-cUK_g

DANCE VISTA all also be shown at various times throughout New Jersey and Beyond through syndicated Educational and Governmental channels across twenty two states.

The Series is produced by the Kennedy Dancers Inc., a 501C3 non-profit organization.

Executive Producer and Host is Diane Dragone and Director is Tom Horan.