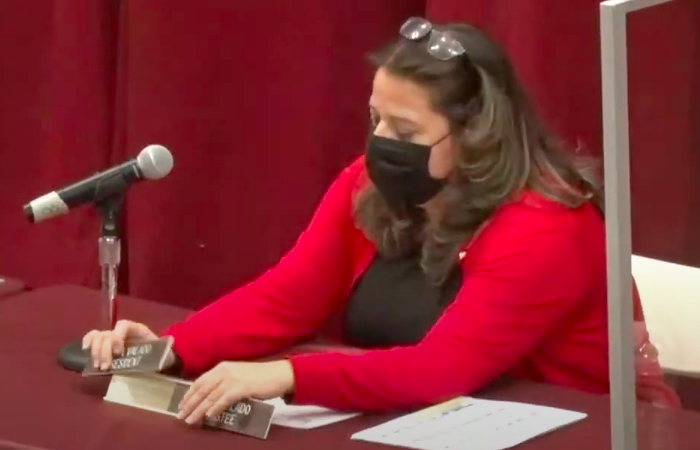 Maria Valado was reelected as Board President on Jan. 4.
×

Maria Valado was reelected as Board President on Jan. 4.

The Bayonne Board of Education voted to keep the same leadership for the third year in a row at its reorganization meeting on Jan. 4.

In just under 12 minutes, the board voted unanimously to elect Trustee Maria Valado as Board President. Valado was elected over former Trustee Joseph Broderick in January of 2020, who had held the position up until then and later resigned in December of that year as he moved out of the city. Valado was last reelected in November of 2020, under the “Together We Can” slate.

“I would just like to take a moment to thank my fellow trustees,” Valado said. “I hope we have great year.”

The board also voted unanimously to elect Trustee Christopher Munoz as Vice President. Munoz was also reelected in 2020 alongside Munoz on the “Together We Can” slate.

“Thank you very much to my colleagues for your trust in me again to be in a leadership position,” Munoz said.

For the second month in a row, the board did not to fill its empty seat, left vacant by Trustee David Watson at the November meeting. While Watson made history as the first Black elected trustee in 2020 running with Valado and Munoz, he resigned in November because he is moving out of Bayonne for family reasons.

While the board has been seeking applicants, a former candidate in the previous school board election who came just shy of a seat by a few hundred votes, wrote a letter to the board that was part of the communications on the board’s agenda for the Jan. 4 meeting.

Gina Irizarry wrote in a letter dated Dec. 14: “There is a narrative circulating that current board members do not respect the rights and voices of you, the voters, of the November election. They are choosing to appoint an individual that not only did not run in this election, but assisted their recent and previous campaigns.

“As I am the next highest vote earner, this dismissiveness is a great disservice to you, the community of voters… As an educator of 18 years, former Bayonne business owner, parent of two Bayonne Public School alumni, student and parent advocate, I am disappointed in this kind of rationalization that blatantly denies the voters of their rights.”

It is not clear whom Irizarry is referring to in regards to who the board is choosing to appoint.

Irizarry implored residents to address the board on the matter: “I am asking you to question the motives and decisions of this board. When I have inquired, I only received silence or a circumventing of the question. It is time for the voters to speak again and do their part for the integrity of our community.”

Keep an eye out next meeting

A new trustee could be appointed to fill the rest of Watson’s term at the next meeting in January. The Bayonne Board of Education will meet on Jan. 25 at 6 p.m. in the Alexander O’Connor Auditorium at Bayonne High School at 669 Avenue A. The public can attend in person or watch online on the board’s YouTube channel. For more information, go to bboed.org.