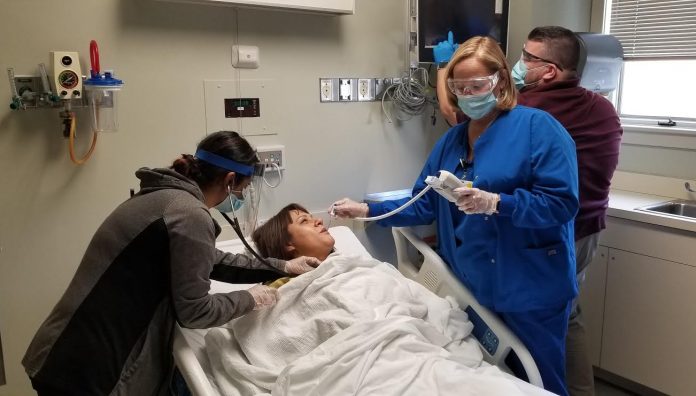 As COVID-19 rages across New Jersey, Hudson County and Bayonne have been hit hard. The number has risen past 222 active cases and into the hundreds locally, according to the Bayonne Office of Emergency Management. Hospitalizations have been increasing too.

Chief Medical Officer at Bayonne Medical Center Dr. Alfredo Rabines described the state of the hospital amid the current surge, saying the volume at the hospital has been gradually increasing over the past several weeks.

“Our volume has gone up significantly in the Emergency Department with our treat and release patients,” Rabines said. “After the holidays, we saw an increase as well. The number of hospital admissions has increased.”

Rabines said that more than half of the people coming into the Emergency Department are testing positive. He added that people have been coming to the ED for a variety of reasons, including: those with virus symptoms, those wanting a test due to lack of testing in their community, as well as the typical emergency patients.

“Patients are coming in, about 15 to 20 of them, and about fifty percent are positive, if not more,” he said.

According to Rabines, the number of patients admitted to the hospital with COVID-19 was 41 as of Jan. 4, having increased from the low 30s the week before. Rabines added that 41 patients is out of a volume of 80 to 90 beds, meaning that approximately half of the hospital’s volume consists of COVID-19 patients.

“Daily admissions are coming in around eight to 10 hospital admissions from COVID per day,” he said. “COVID patients are taking up more and more of the space of the available hospital beds based on nursing ratios.”

Of those who are admitted after testing positive for COVID-19, most are not vaccinated against the virus.

“What we find interesting is the number of un-vaccinated patients that are getting admitted is about 70 percent,” Rabines said. “Every day that we take account, it’s approximately 70 percent. So it’s affecting the unvaccinated tremendously more than those who are unvaccinated.”

Rabines said vaccination makes all the difference when it comes to the symptoms and severity of the virus. “The ones who are vaccinated are getting less severe symptoms.”

According to Rabines, conditions at the hospital would be much worse if not for the vaccines.

“If the vaccine was not around our volume would be significantly higher,” he said.

The vaccine remains the best way to protect against seriously illness, hospitalization, and even death from COVID-19, according to Rabines. The hospital offers vaccines to the community in the ER on Tuesdays and Thursdays during operating hours.

“The vaccine plus the usual social distancing and hand washing, those sort of protocols are essential for avoiding transmission,” he said.

“We don’t have as many patients in the Intensive Care Unit as we did before,” Rabines said. “The level of critical care is not as high as it was with the Delta variant and in previous variants.”

Amid the surge, Rabines said the hospital has not been immune to the nationwide shortage of nurses.

“We do have a significant challenge with staffing in the hospitals across the CarePoint Health system,” he said. “Our nursing staff in general has been very much affected by the pandemic, the previous wave, and even more so now. We’ve been significantly low on nursing because of that. The hospitals are affected tremendously because you can’t allocate all of these patients to one nurse. You need to limit the amount of nursing. The ED gets backed up. Yesterday we had over 10 patients waiting for a bed in the hospital. So those are significant issues.”

In addition to an increase in patients, the nursing shortage has been made worse by staff testing positive for COVID-19.

“These critical staffing concerns are real,” Rabines said. “We as an institution are very aware and are making significant efforts to try to recruit and accommodate more nursing and training. What’s going on with the nursing shortages in the U.S. has hit home quite hard. We are doing our best, but this round of the pandemic has been very difficult… There’s a backup in rooms available for patients due to a lack of staffing. The ED has been really backed up as well. We also have a significant challenge in employees getting the virus from community spread. It was higher than the previous wave of the pandemic. The transmissibility is obviously higher because employees are testing positive more than they before whether vaccination or not.”

Another cause is staff facing “burnout” from dealing with wave after of wave of virus patients.

“I think the first couple of waves led us to the shortage in nursing due to the burnout,” Rabines said. “This wave is also causing a shortage due to the staff who test positive… There’s empty beds, there’s just no staff to run them… If we get more nursing staff, than we get more rooms, we can get more beds. As people get better from being positive, we will have some patients discharged, some employees come out of their isolation status, and then we can open a couple more rooms and have more space for more patients.”

Coping with the COVID-19 surge

However, Rabines made it clear the hospital is nowhere near being at capacity.

“We’re not diverting patients,” he said. “We’re maintaining a good steady flow of patients based on what we have.”

And Rabines said the hospital will continue to do so throughout the rest of the current surge. Looking to the future, he estimated that may happen in the comings weeks, following mid-January.

“Based on what I’ve seen from other parts of the country, it seems that it’ll level off within a couple of weeks,” Rabines said. “I do suspect that it will, just from the trend I see on a day to day basis. The curve is gradually increasing. It plateaus a little bit, it spikes a little bit, then plateaus again. So we’ll see how it goes. I hope within a couple of weeks the numbers will be trending downward.”