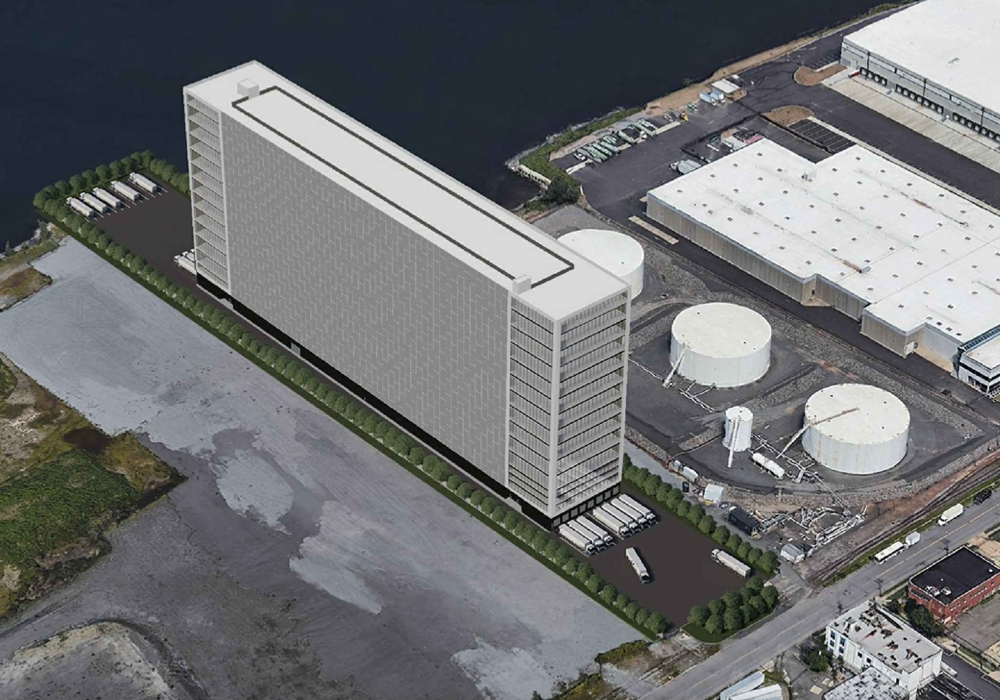 A rendering of the proposed warehouse on the Caschem site.
×

A rendering of the proposed warehouse on the Caschem site.

The owner of the former Caschem site at 35 Avenue A is looking to construct a 16-story warehouse on the western portion of the site, plans show. A rendering and architectural plans illustrate how the Gamal Group is in the process of getting final site plans approved for the project on the west side of Avenue A at the former industrial site.

Meanwhile, the lawsuit filed by a resident against the city of Bayonne alleging the Bayonne City Council violated the Open Public Meetings Act at its December meeting has moved forward, with Hudson County Superior Court Judge Joseph Turula set to decide the case on Feb. 4.

In September, the Bayonne Planning Board adopted the Caschem redevelopment plan encompassing the entire site. The idea was to allow mixed-use residential up to three and four stories on the eastern side of Avenue A, and to allow buildings of a similar height on the western side of Avenue A including but not limited to uses such as a hotel, community center, restaurant, waterfront plaza, and more residential units.

Prior to its approval, the Gamal Group had expressed intentions to construct such buildings on the site. However, at the public hearing for the redevelopment plan in September, attorney Glenn Kienz argued on behalf of the redeveloper for the redevelopment plan to allow taller buildings to be permitted on the site. Kienz argued that height limitations were made stricter at the request of the redeveloper seeking to build a film studio at the former Texaco site, Togus Urban Renewal, and said that they had limited to no communication with their neighbor.

Despite that, the planning board approved the redevelopment plan. However, it continued to hit more road bumps before the city council. The plan was tabled for a month in October, at the request of the redeveloper, who was seeking to submit an alternate plan. The plan was introduced in November, but at the December meeting the council did not second the motion to open the public hearing for the ordinance to approve the original redevelopment plan. When City Council President Sharon Ashe-Nadrowski’s motion failed, the ordinance did as well.

That handling of the situation has led to litigation seeking to hold a public hearing on the original redevelopment plan prior to any action being taken on the new ordinance.

However, that is not always the case, and it can be done through the council, officials said. While critics have claimed it limits public involvement because it will be more of a conformity check than a traditional public hearing before the planning board, officials said the public will have the opportunity to comment both during the consistency review before the planning board and the public hearing before the city council.

The Gamal Group East redevelopment plan was slated to undergo that consistency review at the Jan. 11 meeting, but that meeting was cancelled. The plan may be heard at the next planning board meeting at 6 p.m. on Feb. 8. The board is planning to shift to virtual meetings soon due to the uptick in COVID-19 cases. For more information, go to bayonnenj.org.

However, the cancellation of the planning board meeting, and thus the consistency review, effectively prevents the city council from acting on the new redevelopment plan at its Jan. 19 meeting. The move allows the suit to play out prior to the public hearing and vote on the new redevelopment plan, which would have to take place after the consistency review before the planning board, which may now be on Feb. 8 at the earliest.

In terms of the warehouse, the redeveloper was allowed to file plans for the site using the underlying zoning because the old redevelopment plan was nixed and the new plan only includes the eastern portion of the site. In this case, that underlying zoning allows industrial uses up to 16 stories, permitting the warehouse, which, if approved, would likely be used for cold-storage related uses.

While the need for warehousing may be more marketable in the area at the moment, the plan disrupts the idea for an “entertainment district” in the downtown area around what will be the film studio at the former Texaco property.

Filed prior to redevelopment plan

While redevelopment plans normally supersede the underling zoning, the applicant can file plans utilizing the underlying zoning prior to the redevelopment plan taking effect, which is how the Gamal Group was able to file the warehouse plans. Those plans are working its way through the process for a final site plan review before the board.

Mack clarified that the new redevelopment plan only encompasses the eastern portion of the site. No plans for the western side of the site were slated to come before the planning board at the cancelled January meeting.

Anything that would be constructed on the site would come before the planning board for a public hearing and final approval. But if the site is fully compliant with the zoning, the board may not have any room to do anything other than approve the application anyway.