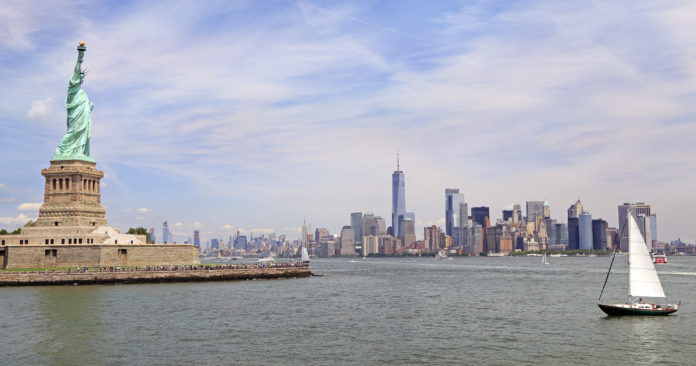 In his 31 years of fishing in the New York Harbor, Joe Shastay, a charter boat captain, has seen the rise and fall of various species. Fluctuating populations are routine here since the harbor is home to migratory marine species that move north or south depending on the season.

But over the past several years, Shastay has noticed changes that aren’t attributed simply to seasonal migration. Year after year, many of his staple species appear in diminished numbers.

“The blue fishery in the East River, above the Verrazano Bridge, has been quite slow,” says Shastay, who relies heavily on bluefish and striped bass for his charter boat business.

“I didn’t see a run this fall, and that’s unusual; they’re usually off The Battery. Birds screaming, and they’re splashing on the surface. I didn’t see it this year for the first time in 5 or 7 years.”

A “run” is generally used in reference to a group of fish of the same species that migrate together.

A 2019 assessment from the Atlantic States Marine Fisheries Commission found that commercial and recreational hauls of bluefish on the East Coast have declined over the past decade. Separate assessments by the same organization found that striped bass, tautog, and Atlantic herring — species popular with commercial and recreational fishermen — were caught less frequently than in prior years.

Yet, Shastay has noticed that while some species appear to dwindle, other historically southern fish have taken up residence in the harbor.

“I caught trigger fish this past August, which is unusual. And there’s what’s called substantial tuna fishing off of Rockaway Beach, which is very unusual,” says Shastay.

Shastay is not alone in his observations. Fishing communities across the tri-state area are increasingly forced to contend with changing fish populations attributed to warming waters, increased ocean acidification, and other factors like overfishing and habitat loss.

Some are adapting by catching new species or relocating to new waters.

“Climate change is definitely occurring and species are shifting to the Northeast,” said Tony DiLernia, a long-time charter boat captain who represented New York State at the Mid-Atlantic Fishery Management Council for 30 years.

“What were cold water species in the New York area have retreated to the New England area. Similarly, South Atlantic species are coming to the Mid Atlantic,” DiLernia said.

DiLernia, like Shastay, has observed several species in the harbor that surprised him in recent years.

“Red drum are really unusual, but we’re discovering them in the Brooklyn area. The frequency increases each year. Same with a southern small fish called the pinfish. Mahi-mahi are seen much more commonly now. More and more king mackerel, and we’ve been catching Spanish mackerel.”

While it’s likely impossible to pinpoint a single proximate cause for changes in fish migration, experts are certain there is a pattern of increasing ocean temperatures and believe that marine life is responding to it.

“There’s been a steady warming of both surface and bottom temperatures in our area over the last decade and that may have an impact on the seasonal cycle,” said Josh Kohut, an assistant professor of marine and coastal sciences at Rutgers University.

A recent study published by researchers from the Universities of Exeter and Bristol claims that temperature-induced fish migration is a global phenomenon. The study, which examined data from over 300 species of marine life, found that climate change has caused an “abundance” of species to shift towards the cooler water at the Earth’s poles and away from the equator.

Fishermen and scientists may be aware of the Northward movement of fish, but government regulators, in many cases, fail to adjust fishing quotas on account of these migration changes.

“Many species that are regulated by the regional councils are controlled by state by state quotas,” says DiLernia, who left his position at the Mid-Atlantic Fishery Management Council last year due to term limits.

“I was of the opinion that the quota allocation was unfair. So, I conceptualized a lawsuit that used NOAA’s own research to show that stocks had shifted to the Northeast.”

The lawsuit was filed against the National Marine Fisheries Services and its parent agencies, NOAA and the Department of Commerce in 2019, and is still pending in federal court.

“To eke out a living, some New York boats have had to purchase North Carolina or Virginia licenses, catch summer flounder off Long Island, then sail hundreds of miles south to land their catch,” asserts the complaint.

While this suit only focuses on summer flounder, there have been other complaints concerning antiquated fishing quotas in recent years. In 2016, Senators Blumenthal and Murphy from Connecticut called on the Department of Commerce to investigate “how current fishing rules disadvantage fishermen in the Northeast.” They argued that, “As species of fish move north, the allocation levels should migrate with them.”

In many cases, rather than updating quotas, federal regulators transfer quotas from one state to another. In response to the New York flounder lawsuit, NOAA announced that Virginia will allocate a number of its flounder quota to New York.

Every East Coast state has been affected by the changing migration patterns of marine life. Delaware’s iconic blue crabs are shifting to the cooler waters of Maine. Florida researchers have observed snook, a tropical game fish, appears to be moving farther North each season.