Bayonne native Jon Mullin is looking to make a name for himself in the Liga de Futbol Americano Profesional, the American football league in Mexico.

A Bayonne High School and Wesley College graduate, Mullin previously played as a quarterback for the Bialystock Lowlanders in the Liga Futbolu Amerykanskiego, the American football league in Poland.

Now he has again donned the number 15 as quarterback of the Reyes de Jalisco. Mullin said the decision stemmed from the opportunity to play in a higher league.

“This was a new opportunity in a new country to play in,” he said. “It’s always good to travel, but always seeking better opportunities was my goal in Poland. I think I accomplished that with the Mexican League because this is a higher league and there’s high competitions. It can only bring better opportunities for me in the future, and right now.

The Mexican football league is a step up from the Polish football league, considered among the top leagues in the world beside the National Football League (NFL) in the U.S. and the Canadian Football League. He has already been practicing in Mexico for the past few weeks, and so far is enjoying the weather.

“The past three weeks here have been great,” he said. “Honestly, it’s a 180 from the weather in Jersey to the weather out here in Mexico. It’s great because it’s a flip flop from 17 degrees to 71.”

Getting acclimated to Mexico

Mullin is currently practicing with the team and weight training in the off season.

Playing in the Mexican league is a major change for Mullin from his time in Poland, and not just the weather. One thing that is similar is the language barrier.

“There are a lot of players that just speak Spanish,” he said. “I’m currently learning Spanish, which is again another obstacle.”

However, being in higher league, Mullin said there are more resources available.

“Practice is completely different going from two coaches in Poland to the coaching staff here in Mexico,” he said. “It’s great to be able to have a foundation organization that, even though they’re a brand new team, they have the football background and aspect of what they know and what they need to get done for us to win the championship.”

Mullin continues to be driven by his family, even tearing up as he talked gleefully about them.

“My family is my biggest support system,” he said. “It’s my mom and my brother. No matter what I do, no matter where I go, they’re always by me. They’re my support system and the reason why I do what I do. One day I want this football dream to repay her for the things that she’s done for me.”

Mullin said it has been hard for him to be away from them in Poland and now Mexico. But he looks forward to seeing them at a game soon. 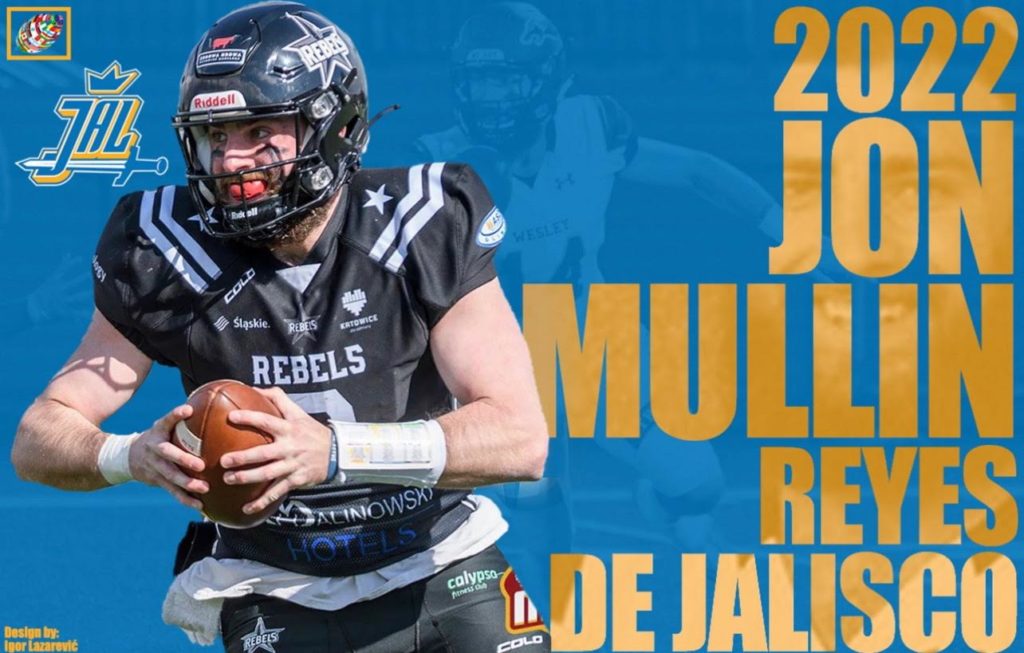 The first game of the season is on March 5, at 7 p.m. Eastern Standard Time. Mullin looks to hit the ground running.

“This is a stepping stone in the right direction, where maybe it could lead to the NFL,” he said. “The Mexican football league is connected with the Canadian Football League. So it brings up an opportunity. Then the doors open that I don’t even realize, because I’m just playing my game and then my ability takes over.”

No matter where he goes, Mullin will always be a son of Bayonne. And he hopes his hometown will continue to cheer him on across the globe.

“You can take the kid out of Bayonne, but you can’t take the Bayonne out of the kid,” he said. “It’s always great to have that hometown support. I know I have that from my hometown, from Bayonne High School, or the flag team that I played on, or even just my friends at home. The support is the best thing for myself.”

Mullin wants to go all the way this season: “I’m looking to bring a championship home to a brand new team in a fresher organization and I plan to bring a high standard. The Mexican Championship is the number one goal.”