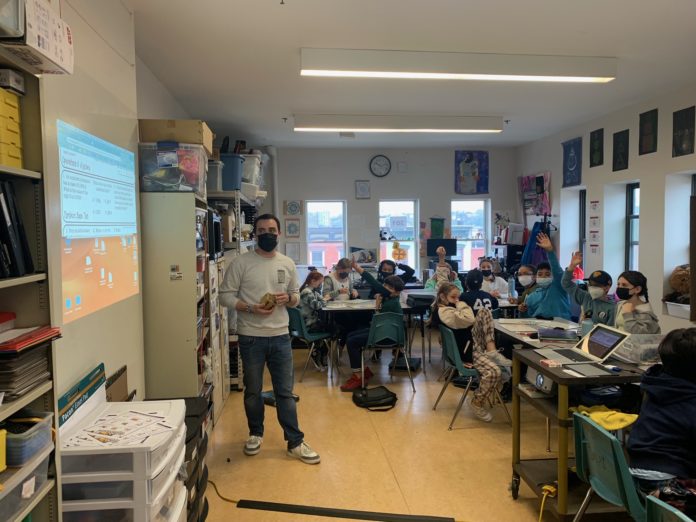 Hoboken Charter School, a public K-12 charter school committed to social justice and service learning, is shining the spotlight on a science, technology, engineering, and math (STEM) teacher who has gone above and beyond for his students in recent years.

Mr. Kunkel, who has taught math and robotics at the Mile Square City public charter school for 16 years, is admired by his students and school staff, is a role model, and is an active volunteer in the community. Mr. Kunkel serves on both the Board of Directors as well as the Planning Committee for FIRST Tech Challenge New Jersey (FTCNJ).

The FTCNJ is a volunteer-driven, non-profit organization that is responsible for planning, organizing, and holding official state level robotics events and league competitions for students in grades seven through twelve. Participants are responsible for designing, building, and programming their robots based on sound engineering principles to compete as alliances against other teams. Teams advance from local qualifying tournaments to state championship tournaments, before advancing to the World Championship Tournament.

Hoboken Charter School has two FTCNJ teams led by Mr. Kunkel: Roboken, with eighth through 12 graders, and The Robotic Llamas, with seventh graders that participated in FTCNJ’s 2021/2022 season. During the League Tournament on December 19, 2021, Roboken ended the day as the fourth ranked team out of 23 teams, formed an alliance with two other teams and competed in the semi-finals.

Mr. Kunkel received the Golden Egg Award in recognition of his volunteer work with the FTCNJ on March 6.

“Christopher Kunkel is one of the most talented, dedicated, and inspiring educators I have ever met. Every day, he challenges his students to think critically and pushes them to learn new things. The experiences students have had at Hoboken Charter School under his mentoring in the STEM domains have developed life-long passions in his students,” said Elizabeth Palma, Principal K-8 Hoboken Charter School.

“His impact extends beyond the walls of the classroom as he runs a three-week summer camp for students and organizes the eighth-grade overnight trip to DC each year. I am grateful that I get to see him in action each day and that our students have him as their teacher.”

“While I certainly put in many hours, there are plenty of other volunteers who make the FIRST organization run,” Mr. Kunkel said. “It is a good group of people who work hard on their own time to put on these events for students to come and compete with their robots.”

The Hoboken Charter School is a public K-12 community of learners that seeks to develop the growth of all its members through its commitment to social justice and service-learning through learner-centered practices. For more information, visit www.hobokencs.org.