Nine candidates seek four seats on Bayonne Board of Education

The election will be held on November 8, and the positions are up for grabs for a varying amount of years 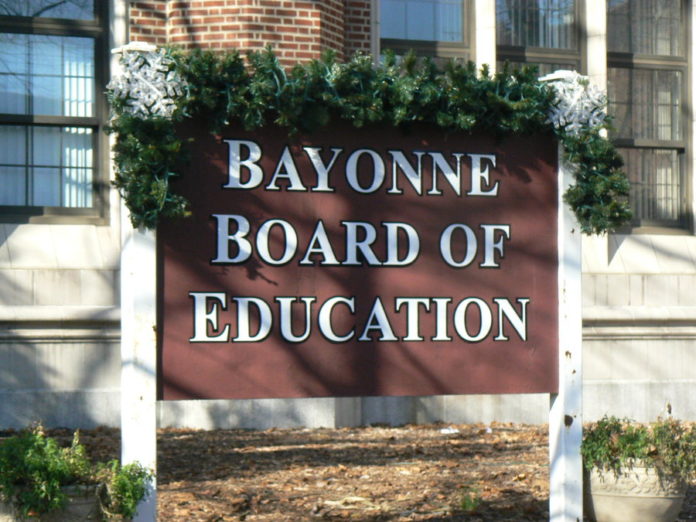 Nine candidates have filed to run in the upcoming Bayonne Board of Education election. The election will be held on November 8, and four seats are up for grabs for a varying amount of years.

Three seats are available for a term of three years each. The terms of Trustees Lisa Burke, Jan Patrick Egan, and Denis Wilbeck are expiring. None are running for re-election, according to the unofficial master list by the Hudson County Clerk’s Office.

Burke and Egan previously ran on the “Together We Can” slate successfully in 2019, and were endorsed by Mayor James Davis and the entire Bayonne City Council at the time. Burke was the mother of children in the special needs Individualized Education Program (IEP), with Egan being the Scoutmaster of Troop 25.

While Egan ran previously in 2018, 2019 was the first time Burke ran and the first time both were elected. They ran on a the “Together We Can” slate alongside Melissa Mathews, who narrowly lost but. Mathews later became the first female Business Administrator in 2020 before resigning in 2022 after not being reappointed amid ongoing legal battles with the city. Now, both Burke and Egan are not running for re-election in 2022.

Also not returning to the board is Wilbeck, who recently ran for an At-Large City Council seat independent of any slate in the 2022 non-partisan municipal election. He ultimately came up short and lost, and now Wilbeck is not seeking re-election to the board.

First elected in 2015 for a one-year term when the board shifted from appointed to elected, Wilbeck has held on to his seat for a number of years. He won re-election for a full three-year term in 2016 by himself, and did so again in 2019 but that time under the incumbent “Commitment, Experience, Integrity” slate. He served as the first elected Vice President of the board after being sworn in back in 2016 and held the position until the 2020 re-organization meeting.

On top of those three seats, one of the board seats available is for a term of one year. Trustee Hector Gonzalez, Jr.’s term is expiring. Gonzalez, a teacher and former candidate for the board in 2018 and 2019, was appointed in January of 2022 to fill the seat left vacant by former Trustee and musician David “Doc” Watson after he moved out of town for family reasons and resigned.

Gonzalez is running for re-election on the “Together We Can” slate with former Board of Education Trustee and former City Councilwoman Mary Jane Desmond. Desmond was appointed to the board in 2015 to fill the last year of a term ahead of the very first school board election. She went on to lose her seat in that 2015 election, but later won a thee-year term after running again in 2016. Desmond resigned in 2018 to allow a cousin a chance to become a teacher without conflict of interest, but later ran for the board again in the election that year but lost.

Desmond recently challenged Davis for chair of the Bayonne City Regular Democratic Organization in 2021, ahead of the 2022 municipal election, and lost. However, she now joins the “Together We Can” slate with Gonzalez seeking a spot on the board again alongside two newcomers.

William Young and Miriam Bechay are also running with incumbent Gonzalez and former Trustee Desmond. Bechay is a junior at NJIT majoring in Biomedical Engineering who has worked on a number of Bayonne campaigns in the past, including for Davis, as well as former Assemblyman Nicholas Chiaravalloti. Most recently, she worked for the campaign of former City Council President and mayoral challenger Sharon Ashe-Nadrowski, according to records from the New Jersey Election Law Enforcement Commission. Bechay is seeking the one-year term.

The four candidates on the “Together We Can” slate face the “Voices For Progress” slate. The election appears set up to be a battle between the two slates.

The “Voices For Progress” slate features previous candidate and educator Gina Irizarry, who has ran for the board frequently since 2015. She came within 135 votes of being elected to the Board of Education in 2021, and is giving it another go in 2022.

Joining Irizarry is Angelique Jackson-Belle, President of the Board of Directors of the Bayonne Youth Center. Jackson-Belle is currently overseeing the planning of the Bayonne Arts Festival, after the closing of The Bridge Art Gallery in the city that used to oversee the event, among the regular programming at the youth center.

Irizarry and Jackson-Belle are joined by Ali Hassan and Saverio “Sam” Maggio. Davis previously backed Maggio as a Democratic committee candidate for the 4th District in the Second Ward back in 2016.

Hassan is the co-founder and CEO of Crescent Crypto Asset Management, and was a major proponent of the mosque in Bayonne. He is seeking the one-year term on the slate.

Running independent of a slate on the “Education is Freedom” slate is Jahnbaz Almas, a board member of the Bayonne Education Foundation. He is running for a three-year term.

The ballot drawing will take place in person at the Hudson County Clerk’s Office at 257 Cornelison Avenue in Jersey City. It will be held in the Fourth Floor in the Elections Division room on August 15 at 3 p.m. and will also be streamed live. For more information, go to hudsoncountyclerk.org.

The board first became elected in 2014, after a referendum by voters that November. This was a reversal of a 1979 referendum by voters to abolish the then-elected board in favor of an appointed board by Mayor Dennis Collins. As the staggered terms of the board’s appointed trustees expired, those seats were filled through elections starting in November of 2015.

Candidates for the school board didn’t really start running together until 2018, when the first “Together We Can” slate featuring Egan as well as Trustee Jodi Casais and then-Henry Harris Elementary School Parent Teacher Association (PTA) President Alicia Losonczy and ran bracketed together on the ballot. Only Casais won, although Egan ran again and won in the subsequent year’s election, and Losonczy is now Land Use Administrator.

Davis offered his endorsement for the slate starting in 2018. He continued that support in the 2019 and 2020 elections, with the Bayonne City Council also offering their endorsement on those occasions. However, he and the council did not make an official endorsement in 2021, which featured the re-election of Casais as well as Trustees Pam Scalfane and Melissa Godesky-Rodriguez.

Of note, Casais and Board President Maria Valado, both who ran with the mayor’s backing on the “Together We Can” slate in the past, would go on to run on a slate with former City Council President and mayoral challenger Sharon Ashe-Nadrowski against Davis in the 2022 non-partisan municipal election, with other board members previously elected on “Together We Can” slates offering monetary and vocal support for the Ashe-Nadrowski campaign. It will be interesting to see if Davis and the new Bayonne City Council will make an endorsement in 2022 or continue the neutral streak.

While “Together We Can” has swept the past two Board of Education elections, even without Davis and the council’s endorsement in 2021, this election will be test to see if the slate keeps up its streak unabated or residents opt for the challengers. Voters will decide between that slate and the “Voices For Progress” slate, as well as Almas, on November 8.