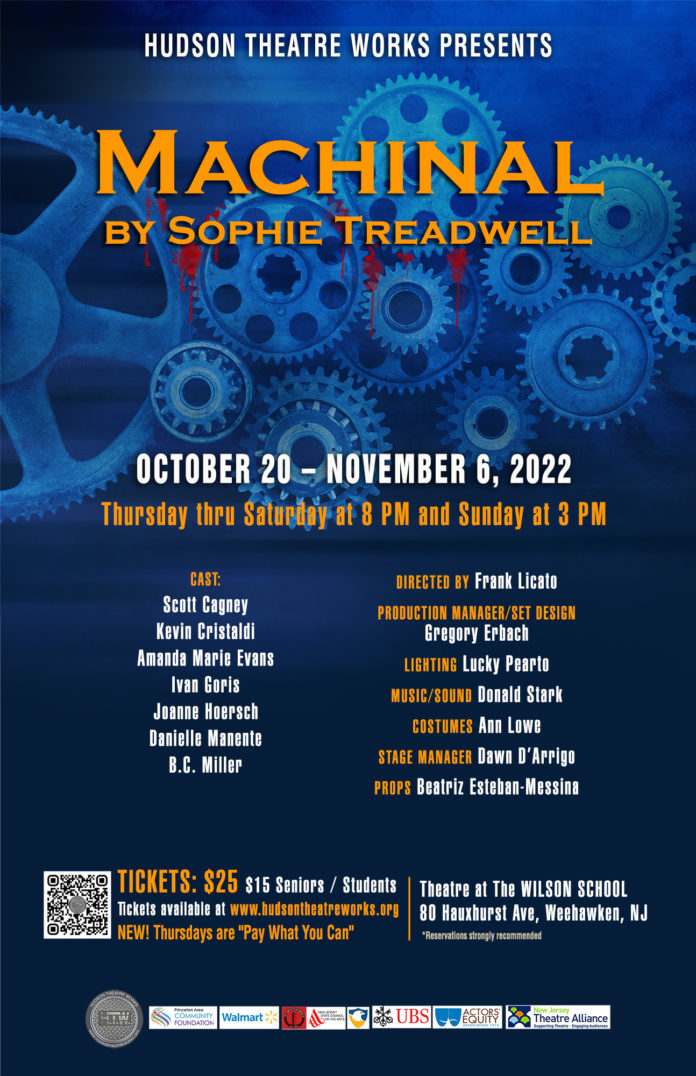 Hudson Theatre Works will start its 10th season of plays by women playwrights with “Machinal,” by Sophie Treadwell.

In Sophie Treadwell’s 1928 feminist tour-de-force, Machinal, a young woman struggles to find her place in a society that was not made for her. Treadwell uses theatrical expressionism to portray a world that has become impersonal and unfeeling; a world that only has room for those who are willing to submit and conform.

The young woman’s inability to submit to the demands and expectations of a society that values conformity over individuality is what ultimately leads to her fate.

Despite having been written nearly a century ago, “Machinal” shows us a world that is strikingly similar to our own. It’s the men in the young woman’s life who have the power to determine her fate. How, then, can a woman fight back? How can she resist and also survive? Is she destined, as one character states, to “submit—right to the end”? In a society that holds no space for her, she must find a way to make a space for herself.

Inspired by the infamous 1927 Snyder/Gray murder trial, this rarely-performed masterpiece portrays the hardened soul of America in the Machine Age. “Machinal” follows the life of Young Woman who is constrained by a society that favors men and money.

The show is directed by Frank Licato with stage design by Gregory Erbach, lighting by Luck Pearto, Costumes by Ann Lowe, Sound Design by Donald Stark, props by Beatriz Esteban-Messina and stage Managed by Dawn D’Arrigo.

HTW will require all audience members to wear masks.

“We want to see people from all economic levels in our audience, from all different backgrounds,” says Licato. “HTW is built on the idea of community and shared conversation. Attending a play sparks ideas, examines the experience of our common humanity. In these difficult times, who doesn’t need to be reminded of that? So get your tickets by clicking on the link below and we’ll see you at The Works!” n
www.hudsontheatreworks.org

Opening October 20th Thursday – Saturday at 8 p.m., Sunday at 3 p.m. (Thursdays are pay what you can!)
At 80 Hauxhurst Avenue Weehawken, NJ 07086
THEATRE AT THE WILSON SCHOOL
TICKETS $25/$15 FOR STUDENTS/SENIORS
TICKETS AT WWW.HUDSONTHEATREWORKS.ORG