In Hoboken, Vote for the Kids First Slate for School Board 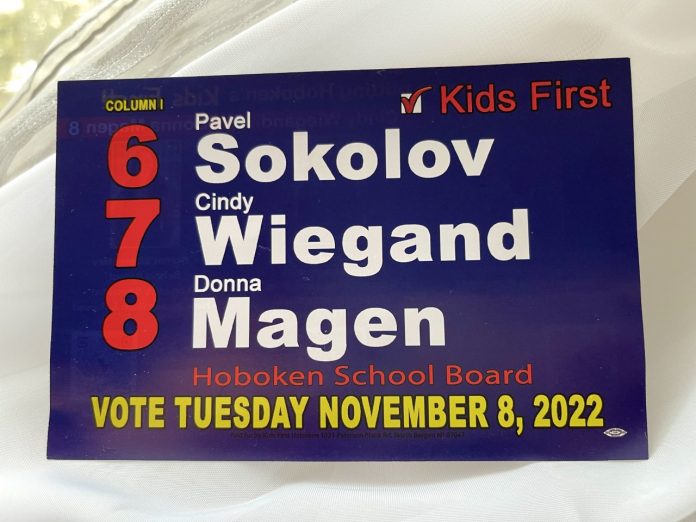 On Tuesday, Nov. 8, Hoboken is holding its most important school board election in years. Three seats are up and eight candidates are running, including two slates, but the choice is clear – the Kids First slate of Pavel Sokolov, Cindy Wiegand and Donna Magen. Here’s why.

For several years the board has been Hoboken’s version of a one-party state. All nine members have been on the same side, and that’s not healthy. With no opposition and little discussion, terrible ideas get approved, and often in secrecy.

Last year the board unveiled a whopper: A $331 million high school (even though the current one is only a third full) that would obliterate the open space of the football field in the middle of town, wreck Columbus Park by slicing off a part and casting much of the rest in shadows, and sharply raise the city’s already enormous property taxes. The board and the administration had been planning this for at least three years and had spent $1.8 million on consultants, architects and bond counsels -– all in complete secrecy. The project was kept so under wraps that reading the previous three years of the board’s official minutes reveals absolutely no hint that such a Taj Mahal was in the works!

Electing Pavel, Cindy and Donna would give us a 6-3 board and finally provide some independent viewpoints. It would put three fresh faces on the board who aren’t tied to the school administration or the establishment in town. Different voices, new ideas and real debates lead to better solutions. Best of all, an opposition guarantees that the days of the board plotting in secret are over.

The Kids First team were leaders in the “No” campaign against the high school in the January referendum. In a big turnout, voters opposed the gold-plated project by a 65% to 35% margin. But the opposing slate didn’t get the message. It fought hard for the “Yes” campaign and leaves no doubt it wants another referendum ASAP. With interest rates having doubled, the new high school will cost more than $400 million next time.

Due to the pandemic, public school enrollment from pre-k through 12th grade is expected to fall this year for the third straight year. The project didn’t take this into account because it was developed before the pandemic. But even if enrollment starts rising again, the “No” campaign and Kids First have proposed many ideas to accommodate any growth without spending close to a half-billion dollars. If elected, Kids First will listen closely to the case for expansion and vote accordingly. But it will vigorously oppose any Taj Mahals with hockey rinks and rooftop football fields.

Let’s hope a Kids First victory puts an end to this pie-in-the-sky nonsense. The board tore the city apart with the referendum and we need to come together and tackle issues that actually matter, such as how to improve the education that our kids receive. I say this as a 21-year resident of Hoboken and a parent who had two children in Wallace, Brandt and Connors for a combined 14 years.