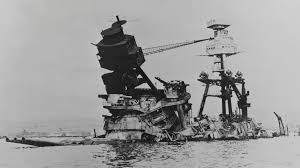 We are approaching the 81st anniversary of the Japanese attack on Pearl Harbor. At 7 o’clock on that fateful Sunday morning on December 7, 1941, The Japanese Imperial Navy launched 351 aircraft in their surprise attack on Pearl Harbor. Many of the 145 ships anchored there were bombed, killing more than 2,400 Americans. All eight of the nation’s great battleships were either sunk or badly damaged. Hickam Field, Wheeler Field and 347 U.S. aircraft also were destroyed. The bullet holes at Hickam caused by the strafing of Japanese aircraft are still visible to this day.

This sneak attack – this day of infamy – was the opening salvo of America’s entry into World War II. The Pearl Harbor assault propelled our country into World War II against the Axis powers of Imperial Japan, National Socialist Germany and Fascist Italy. Thirteen million men and women served in the military during the three-and-a-half years of America’s involvement in that war. Approximately 405,000 lost their lives during World War II, some 292,000 of which were combat related.

What an awesome price was paid by those in uniform, their families, and every American citizen to keep the western world free from the evils and tyranny of absolute despotism.

The ships that were bombed and torpedoed at Pearl Harbor were either scrapped, salvaged, or repaired and returned to active service – except for one.

The USS Arizona was so badly damaged that only a small portion of her fallen crew could be recovered. Consequently, the Arizona became a seamen’s memorial and a national monument. The Arizona rests exactly where she sank some 81 years ago, her deck still visible just below the water line at low tide. Entombed below her deck, some 1,100 seamen are still serving our country — forever. They remind us of the ultimate sacrifices that were made during World War II to keep our nation and the world free from the Axis of evil that plagued the globe at that time.

Let us never forget the sacrifices that were made at Pearl Harbor. On December 7, let us pause for a moment to reflect on those who paid the ultimate price to preserve freedom. The events of December 7,1941 should reinforce a valuable lesson: Freedom is never free.