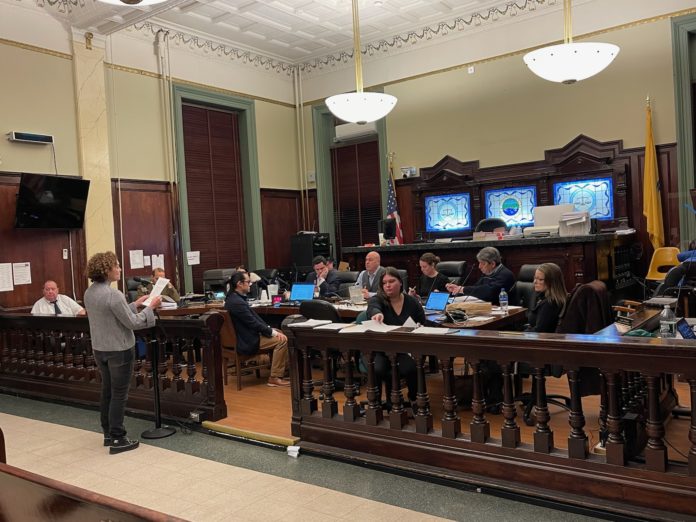 In a meeting that lasted nearly three hours, the Hoboken City Council voted 5-4 to approve the application of Story Dispensary, the controversial cannabis store proposed for 51-53 14th St., site of the former Hudson Tavern.

The dispensary now goes to the state’s Cannabis Regulatory Commission and if approved would come away with a state issued retail license.

With the backing of the city’s Planning Board, the application has faced a plethora of issues, from facing a second lawsuit filed by the condo association at it’s prospective address against both the Planning Board and the applicants, to public fears about the location’s impact on a densely populated neighborhood.

Several residents spoke out against the proposed dispensary.

“If the public could have had a vote on locations and number of dispensaries for such an important and new industry in a town like Hoboken, maybe we could have avoided a situation such as this one,” said Thomas Brennan, a resident of Hoboken and former owner of the Hudson Tavern.

Another resident, Joshua Tanzer, who said he’s lived on 14th street for the past 32 years, said that the proceedings for the dispensary reminded of him of his past days as a news reporter in Middlesex and Union County.

Tanzer added, one of the towns he was assigned to cover approved a vote for a sewage sludge incinerator near the residential area of the town, which he said a majority of residents disapproved of the city’s vote.

“The point that I want to make is that the second vote when they (the city) voted no, was not the mistake, the mistake was the first vote and the second vote was what they had to do to fix the vote that they initially held in favor of the project that the people did not want, I hope you keep that in mind,” he said.

Fifth Ward Councilman Phil Cohen who represents the northwest part of Hoboken, said over the phone that, “A number of people suggested that things have been rushed with respect to this application. I feel like we have been discussing this application for the better part of the year.” Story’s application was the first in 2022, so in that respect Cohen was correct.

The Cannabis Review Board has approved six applications up to this point. In a meeting on Monday night, members of the public attended with other elected officials who were involved in conversations related to the dispensary. According to members who attended the meeting Mayor Ravi Bhalla supported the dispensary, and he indicated he had no problem with Story’s proposed location.

Councilmember Ruben Ramos, said he acknowledged the “mistake” people were referring at the council meeting, as he was one of the advocates who supported the expansion of the commercial business district in the Southwest of Hoboken.

“Nowhere in that conversation were we thinking that this would allow a cannabis dispensary to open up in the expanded commercial business district, so this applicant caught that unfortunate window in time,” said Ramos. “We made a mistake, it was an honest mistake.”

Councilman James Doyle, who is also part of the city’s planning board said he cast his vote in favor of commercializing 14 Street for the “conditional purposes of cannabis dispensary,” who unlike the other council members he said he read through the ordinance, so he claimed.

Councilperson-At-Large Emily Jabbour said she was concerned with the lack of communication among council members and the direct public on the matter of the dispensary.

“I am concerned that the mom who gets migraine headaches who is currently driving a hour outside of Hoboken to get relief at a dispensary or the parent who has trouble sleeping at night who has been affected by the pandemic in ways where cannabis is helped to their sleep, or the cancer patient who finds pain relief in cannabis, that those voices have not been part of the conversation.”

Second Ward Councilwoman Tiffanie Fisher, who has opposed the opening of the dispensary in her ward, said it was never 50/50, as she recalled on the vote made last year in approving the proceedings of the dispensary. According to Fisher, the original ordinance would have allowed 35 dispensaries to operate in the location, in which she said thanked Mayor Bhala’s administration for “rectifying this terrible mistake,” in changing the language in the ordinance that would have allowed 35 dispensaries.

“The biggest concern is all of the additional traffic coming to the area, people unfamiliar with our streets trying to navigate through them and an increased number of impaired drivers. This is antithetical to Vision Zero,” the city’s program for reducing traffic accidents and deaths to zero by 2030.