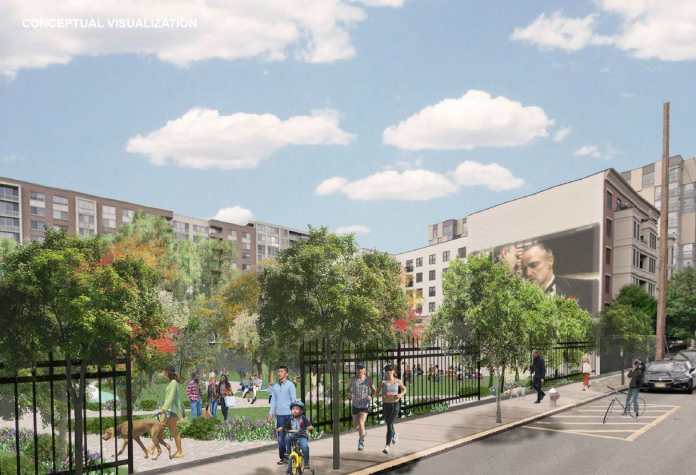 Residents will be invited to participate in several public engagement sessions on the city’s newest resiliency park located at 800 Monroe Street.

The 1.43-acre property will part of the city’s effort to reduce floods and provide open space amenities for residents. The property was acquired through the land swap agreement known as the Monarch Settlement Agreement.

As part of the agreement, the City also secured approximately $550,000 in funding from the developer for the 800 Monroe design process.

The City will also receive $15 million in community benefit contributions for the construction of the park and Green Circuit, which includes a protected bike lane, through a new redevelopment agreement for 930 Monroe St.

“Instead of a large residential building, residents in West Hoboken will soon have another beautiful resiliency park to enjoy,” said Mayor Bhalla. “Not only will this park improve the quality of life for everyone and provide important outdoor amenities, but it will also be the latest step to add even more flood infrastructure to the park to tackle heavy rainfall flooding. It’s yet the latest win-win for Hoboken, and I look forward to collaborating with the community to develop the park’s features.”

The engagement session will take place in the Hoboken High School cafeteria at 800 Clinton St. at 6:30 p.m. on Thursday, Jan. 26.

The project team for the property will use public input gathered through future surveys and meetings to incorporate feedback regarding the community’s open space needs into the final design, according to the city’s press release.

The park will also include above and below-ground infrastructure to mitigate area flooding caused by heavy rainfall.