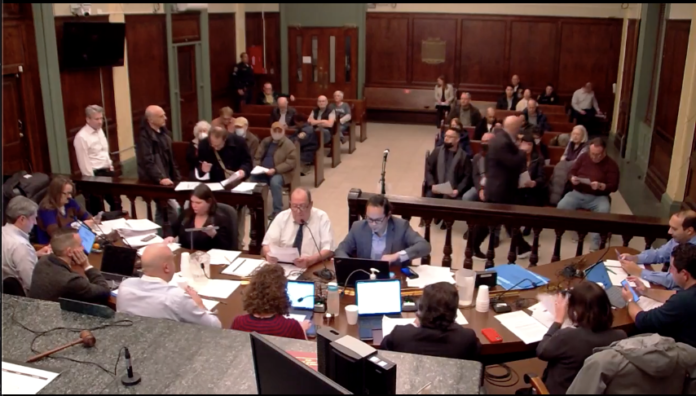 Landlords and tenants in Hoboken were charged up against changes to the 50-year-old Rent Control proposed ordinance at the Jan. 18 City Council meeting.

According to the ordinance intended to amend the city’s current Chapter 155 rental control laws, it would clarify various provisions, including how properties that fall under the legal status of rent control are legally calculated, and if those units or properties would fall under an exemption.

“Unfortunately, due to some very bad decision making on the part of the administration we once again find ourselves in a quagmire when it comes to tenant protections,” said Cheryl Fallick, a resident of Hoboken and a former member of the city’s rent leveling and stabilization board, since October 2022

“Our laws on the books are fairly protective, but no one would know by the way they have been historically administered, including a complete lack of enforcement.”

A 400 square foot Bloomfield Street apartment was determined to have a legal base rent of $4,831.00 without added surcharges according to Fallick. “There is no such thing as a rent control law that if properly administered would result in anything that remotely resembles this.”

“I would hope that we come together and have a piece legislation that all nine members can get behind,” said council member Tiffanie Fisher. “I think it’s important for our city council to have a debate on this.”

The newly proposed changes would make new buildings with four or more units exempt from the ordinance for 30 years. But they would be required to file the necessary paperwork for the building to receive a certificate of occupancy, or any legal permits required, and landlords must notify renters if the property is under rent control before they move in.

The changes would also reduce their price cap on the maximum yearly increase from 7.5 percent to 5 percent, according to the ordinance.

Last year, the council approved a contract with retired Judge Barry Sarkisian to review Hoboken’s rent control laws. Members of the public asked about some of the implications of the contract but direct responses were not forthcoming.

The Hudson Reporter reached out to the Schumann Hanlon Margulies law firm to ask about the rent control ordinance, and no statement has been provided so far.

Council member James Doyle, who currently serves on the city’s Planning Board under the Community Development subcommittee, said the idea that this ordinance would weaken tenant protections is an “unfortunate characterization,” and “untrue.”

“The rent control ordinance is really something in my view, and many may disagree but its about protecting the inventory of apartments, not just the existing tenant today,” said Doyle.

Councilwoman Jennifer Giattino, spoke afterwards saying that changes had been made prior to the meeting that she was not made aware of, along with several other members of the council.

“Well, I didn’t know that was gone,” said Giattino. “I am not trusting the word of anyone on this council without reading it myself.”

Last month the council approved on first reading an ordinance which would lower of the annual maximum rent increase for units falling under rent control from 7.5 percent to 4 percent, supported by both then Councilwoman-at-Large Emily Jabbour, who sponsored the measure and Councilman-at-Large James Doyle.

Prior to the city council meeting this week the Hoboken Fair Housing Association (HFHA), a nonprofit organization which leans on the right of tenants to have fair tenant housing protections, released a statement prior to the council meeting, stating that “Hoboken’s rent control laws are decidedly nuanced, and our local rent control history is rife with a tangled web of fires, displacements, referendums, court challenges, accusations, and contentious ballot questions. Over the 50 years that Hoboken has had rent control in place, it has gone from a centerpiece on the platform of aspiring local political candidates to a topic that candidates and elected officials do.”

An email sent out to the Hudson Reporter, the HFHA wrote  “No outreach was done to Hoboken renters, rent control activists or the rent leveling board members in connection with crafting the proposal.”

Ron Simoncini, the executive director of the Mile Square Taxpayers Association, a group of landlords and property owners, spoke at the meeting on the proposed amendments brought by the rent control ordinance.

“I do not think the language in there is absolutely correct or clear,” he said, “we need to go way further in figuring out Hoboken rent control regime.”