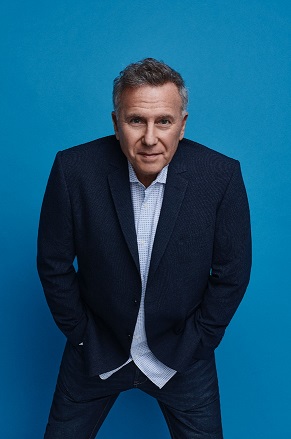 He’s currently starring in two hit shows for Netflix: Stranger Things as Dr. Sam Owens, in a role created by the Duffer Brothers with Reiser specifically in mind, and the Chuck Lorre-created The Kominsky Method, alongside Michael Douglas and Alan Arkin.

This follows two shows for Amazon: three seasons on Red Oaks – in a role singled out as “one of his absolute finest, not just of late, but of ever.” – and in Mad Men creator Matt Weiner’s limited series The Romanoffs, alongside Christina Hendricks and Isabelle Huppert

Working behind the camera, Reiser created and produced the seven-episode series There’s…. Johnny’ streaming on Hulu.  The show, which Reiser co-created with filmmaker David Steven Simon and co-produced with David Gordon Green, and done in conjunction with The Carson Company, intertwines authentic footage from ‘The Tonight Show Starring Johnny Carson’ with a fictional story taking place behind the scenes at the iconic show in the early 1970’s. There’s…. Johnny! premiered to critical praise, with Decider calling it “… a television experience unlike any I’ve seen on TV in recent years. There’s…Johnny! is an effortless watch…This show unfolds like a dream, a memory fondly recalled.”

Back on the acting side, Reiser earlier this year joined Sam Rockwell, Michelle Williams and producers Lin-Manuel Miranda and Tommy Kale in Fx’s Fosse/Verdon which was nominated for multiple Emmy awards, including Best Limited Series.

And this very busy year will end with the highly anticipated return of Mad About You, the long-running hit comedy of the 90’s in which Reiser starred with Helen Hunt, which Reiser also co-created. In addition to Reiser’s multiple Emmy, Golden Globe, American Comedy Award and Screen Actors Guild nominations, Mad About You, won numerous Emmy awards, a coveted Peabody and a Golden Globe for Best Comedy Series. The original series ended in May 1999 and will now return, 20 years later, as a limited series on Spectrum Originals – the first comedy they’re producing – debuting in the holiday season later this year.

Reiser has had notable performances in films such as Diner, Bye Bye Love, Aliens, One Night At McCool’s, and Beverly Hills Cop (I and II).  More recently, Reiser earned acclaim for his supporting role in the Academy Award-winning film, Whiplash, and also appeared in John McDonagh’s War on Everyone, The Little Hours with John C. Reilly and Aubrey Plaza and will be seen with Kevin Hart in the touching comedy Fatherhood, also to be released this Holiday season.

Reiser’s first book, “Couplehood,” sold over two million copies and reached the number one spot on The New York Times bestseller list. His second bestseller, “Babyhood,” was followed by his third bestseller, “Familyhood.”

Reiser, who attended the State University of New York at Binghamton and majored in music, co-wrote “The Final Frontier” – the theme song from Mad About You with Grammy-winning producer Don Was and in 2011 he released an album of original songs with British singer / songwriter Julia Fordham called ‘Unusual Suspects.’

Between film and television commitments, Reiser, who was voted one of Comedy Central’s “Top 100 Comedians of All Time.” has returned to his roots as a stand-up and plays sold out venues across the country.  Paul Reiser and his family reside in Los Angeles.  Visit: http://www.paulreiser.com & http://vid.unitedtalent.com/pr_standup