Portrait of a neighborhood

Duer Place, aka The Rabbit Hutch 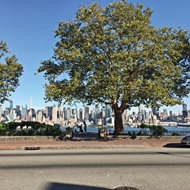 As newlyweds, we chose to live in Weehawken because of the proximity to our work in Manhattan. We were introduced to the town by a good friend who’d lived here all his life. Our first home was an apartment at 700 Boulevard East, less than a half mile north of the Lincoln Tunnel entrance.
We had lived there for two years when we joined the Association for International Development, AID, a lay missionary group in the Catholic Church. It recruited professionals and their families and trained them – in a spiritual and religious milieu – about the cultural, social, and economic problems of the developing world. Under their auspices, we lived, worked, and started raising a family in Ecuador.
Upon our return we lived briefly at the AID headquarters in Paterson while searching for a home in Weehawken. We found one at 22 Duer Place.
New to the neighborhood, I was filling up my tank at the Amoco station a few blocks from our home. The attendant, who was also the owner, asked where I lived. When I told him that we had just moved into Duer Place, he said, “Oh, the rabbit hutch.”
“The rabbit hutch?” I asked. “Why the rabbit hutch?”
It didn’t take me long to find out.
Duer Place is a long block extending from Boulevard East to an apartment house that was formerly a fire house. Where Duer meets the Boulevard on the Palisades hills, it rises 140 feet above sea level, about 600 feet from the western shoreline of the Hudson River.
My first clue to the appropriateness of the nickname was our next-door neighbor’s seven children, who included a set of twins. A family three doors in the other direction had 12 children although the older ones had already left home. My son, who was nine months old when we moved in, started school with five classmates from the block. Every one of my children had at least one neighbor as a classmate. When my youngest started school, I decided to take an informal census of the school-aged kids (K through 12) on our street. I came up with a not-surprising fifty-four.

On a clear day

Standing in front of my house and facing east, on a clear day I can look down 45th Street in Manhattan, at the far end of which some UN buildings are discernible, as is the East River and land in the borough of Queens. A park, enclosed by a fence, sits between Boulevard East and the top of the cliff. Standing at that fence, one has a sweeping view extending from the Verrazano Bridge to the George Washington. Between them stretches probably the most magnificent urban panorama in the world. Midtown Manhattan, once dominated by the Empire State Building and now the home of new skyscrapers, many of which have their own claim to celebrity, is right across the river.
The southern tip of the island – once dominated by the Twin Towers of the World Trade Center not four miles away – now features the new Freedom Tower, which, at its construction, was for a brief time the tallest building in the world.
Our brick front steps fan outward, providing a warm welcome. Years ago, when I returned from work, I would weave through a clutch of kids taking advantage of the view.
The block was an informal playground. The older kids organized games in the street, including touch football, street hockey and stickball; the younger ones on the street relocated to the backyards with hide-and-seek and tag.
Outwardly the block has not changed much over the years, except for the size of the families. Our four children would be on the high side now. The family that bought the house that used to hold seven kids has only one son, born after they arrived. (Maybe it’s catching.) The father says that he lies in bed at night and cannot imagine nine people living under his roof.
Getting to school used to be a worry for the mothers. At the beginning of the school year they usually walked with the younger ones. Kindergarteners were on their own once they recognized other kids from their class with whom they could walk. It was an eight-block trek with two intersections monitored by crossing guards. There was usually a parent in each group.
Having a large family in the late 1960s usually meant you were working class. Duer Place was a mixture. The father of the seven kids next to us had been a lieutenant colonel in the Marine Corps and was a bank officer in civilian life until his retirement. I am a civil engineer and was a partner in an international consulting-engineer firm at my retirement. Other occupations ran the gamut from truck driver to insurance salesperson to school teacher.
The lot sizes on Duer vary from 25 to 37.5 feet, the larger usually accommodating a detached garage. Most are owner occupied and they take pride in it, as can be seen by the care obviously given to the buildings and the gardens.
Not all of the new owners are new to the area. Some are children of the previous ones, so the Rabbit Hutch is still a family oriented place, even with fewer rabbits.

James Dette is a freelance writer living in Weehawken with his wife, Evelyn. Since his early retirement from a civil engineering career, he has directed his writing skills to a diverse audience. His work, which includes travel articles as well as light and serious op-ed commentaries, has appeared in The New York Times, Irish America, The Record, and Street News. His participation in local politics, including eight years as an elected member of the Board of Education, provided the grist for his first novel, “Rollmops” (Full Court Press, 2003).