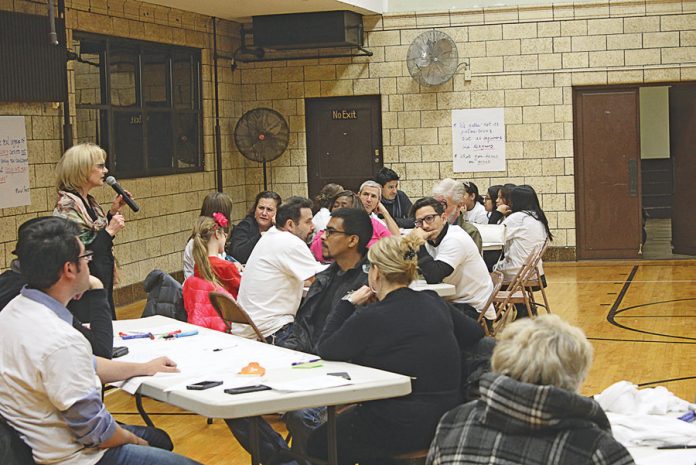 Leonard Gordon Park, located on the corner of Manhattan Avenue and JFK Boulevard, is one Jersey City’s oldest parks, a place with spectacular views of the Hackensack River Valley. But it is also a park that you might miss if you don’t look carefully, especially in the rush of every day commuting.
City officials along with Friends of Leonard Gordon Park want to change that, hoping to upgrade the park so that people will want to travel to it.
And so with quotes from Marcel Proust and other great historic thinkers, residents of Jersey City Heights gathered last month for what is expected to be the first of a number of meetings to help come up with ideas for upgrading the historic western slope park
In what might have seemed like a game of musical chairs, residents were asked to go from table to table, to meet new people and share their ideas in a two hour brain storming session on Dec. 2.
Those who attended were asked to provide ideas, suggest what would bring them to the park, and propose what next steps should be taken.
The meetings are being conducted by Brian Weller, director of Architecture for Jersey City and assisted by both the Jersey City Parks Coalition and the Friends of Leonard Gordon Park.
To form a good collective vision, local historical specialists will share information about who Leonard Gordon was, on the original look and vision for the park, and why there are four cement statues of huge bison and bear as well as other statues in the park.

What does Leonard Gordon Park mean to you?

Organizers said they were looking for ideas to help recreate the park for all people, and to help pollinate seeds of ideas for development. This will be the first of a number of park master plan meetings to determine a vision for the future.
The two hour session took place at St. John’s Lutheran Church gym on North Street, where a few dozen residents attempted to sort through their memories of the park and speculate on what might be done to make it more attractive.
The park, according to Mary Mills, has gone through several changes over its 110 year history. Sometimes better known as Mosquito Park for the swarms of bugs that used to infest it from the nearby Meadowlands, the park had humble beginnings. Best known for the sculptures of buffalo and bears by artist Solon Hannibal Borglum, the park features a wide range of recreational activities, such as a basketball court and soccer field. A fire gutted its playground several years ago, but thanks to help of the city and grants from the Hudson County Open Trust Fund, the playground was restored. Additional sports features were added recently, as well as the opening of a farmer’s market.
The site for the park was sold to the city in 1907 as an undeveloped hillside woodland. The 5.7 acre park was designed by the landscape architect John T. Withers who left much of the rocky terrain as he found it.
Mills said development of the park took decades and tons of dirt were brought in to help cover the Palisades rock of which it is largely comprised.
_____________
“The gazebo is in pretty good shape.” – Mary Mills
____________
“A lot of that was done by the WPA,” she said, referring to a Depression-era federal works project. Many of the key pieces Jersey City’s history were funded by these grants, often as a result of significant lobbying by then Mayor Frank Hague.
An iron fence anchored in concrete piers surrounds the park. In the center is a circular gazebo or bandstand.
“The gazebo is in pretty good shape,” said Mills, but noted that the park has issues of drainage that need to be addressed. Rainwater rushes off the hillside park, often flooding the basements and yards of nearby residences.
The move to make improvements to the park comes after nearly a decade of turmoil by various groups seeking to impose their own vision on needed renovations. The series of meetings is designed to gather input from the general public and to let the city take a larger role in implementing what will eventually become the master plan for the park’s upgrades.
There is currently about $700,000 set aside for improvements, but additional grants might be available as plans unfold.
Some of the residents hoped to expand the use of the park to include musical performances and art shows, as well as improving facilities that could include public restrooms, which it currently lacks.