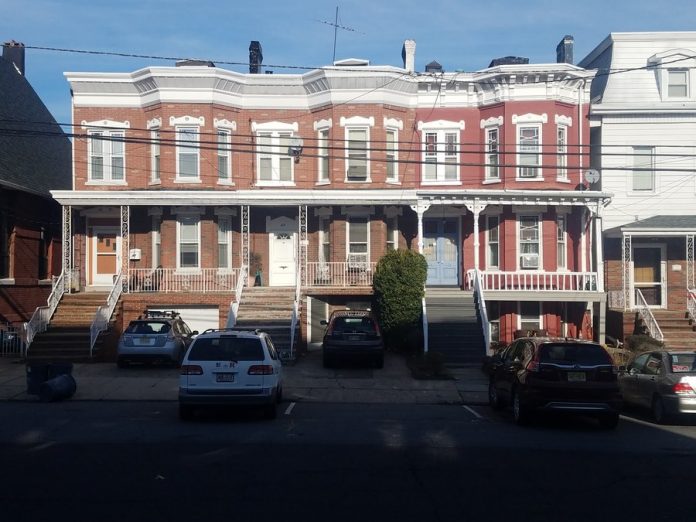 Bayonne’s rich history is both celebrated and preserved by the Bayonne Historic Preservation Commission. Since the Historic Preservation Ordinance was introduced in 1999, the historic commission has had the green light to designate buildings with historical relevance as historical landmarks. Buildings that look quaint, old, and pretty to the regular resident sometimes have great local historical significance to members of the commission.
At a city council meeting in November, the historic commission designated a red-brick row house at 20 West 33rd Street, known in the historical landmark registry as the “Schuyler Row House,” after Jacob Rutsen Schuyler, who became the first Bayonne City Council President after the city’s incorporation in 1869. Schuyler founded Schuyler, Hartley and Graham, the largest firearms business in the country in 1860, and died in the home on February 4, 1887, according to his obituary in the New York Herald. The building is the third Schuyler Row House to be designated. Its neighbors at 16 and 14 West 33rd Street were also designated.
Joe Ryan, staff secretary for the Bayonne Historic Preservation Commission, said the late 18th Century-style Italianate row homes on 33rd Street are “very unusual for Bayonne” because Bayonne homes at the time were built with wooden frames. “So brownstone and brick stone from that era are very rare.” He said the purpose of designating this site and others is to preserve the façade. The owner of the property can still renovate the interior.
Soon after the Historic Preservation Ordinance was passed, the city hired outside consultants to conduct a survey of historically significant buildings in Bayonne. “From time to time, the commissioners look into buildings on that list,” Ryan said. “And occasionally we receive self-nominations from property owners.”

In 2013, the Historic Preservation Commission designated another brick row house on 43 West 33rd Street, a block away from the Schuyler Row House. The “Isbills Row House” is named after the famed Bayonne developer, Edmond Isbills, who lived in Bayonne for 50 years before dying in 1924 at age 90. “It clearly shows how the Isbills family combined their expertise in masonry and carpentry to provide designs that were unique to their skill sets and to their own style of architecture,” read the ordinance.
Also on the list of locally designated historical landmarks is the Bayonne Public Library, the Veterans’ Museum/VFW Post on West 9th Street, the curbside “Abramson Clock” at 484 Broadway, and the Depestre-O’Brien-Zeik House on 106 West 8th Street.

Some of the most notable sites are also on the State and National Registers of Historic Places, such as the Bayonne Community Museum (formerly the Bayonne Trust Company) on Broadway and 9th Street, the Chief John T. Brennan Fire Museum on 10 West 47th Street, the Dutch Reformed Church of Bergen Neck on Avenue C, and the Hale-Whitney Mansion on 100 Broadway.
It’s not only buildings that are designated historic sites. Entire districts can be designated, although it only happened once before in Bayonne for Stephen R. Gregg-Bayonne County Park Historic District. Ryan said there has been “a lot of discussion of [designating] another district,” but the commission is waiting to see if the new City Master Plan will allow for it this year.
Residents who believe their home should be designated a historical landmark need to fill out a special request form at city hall.