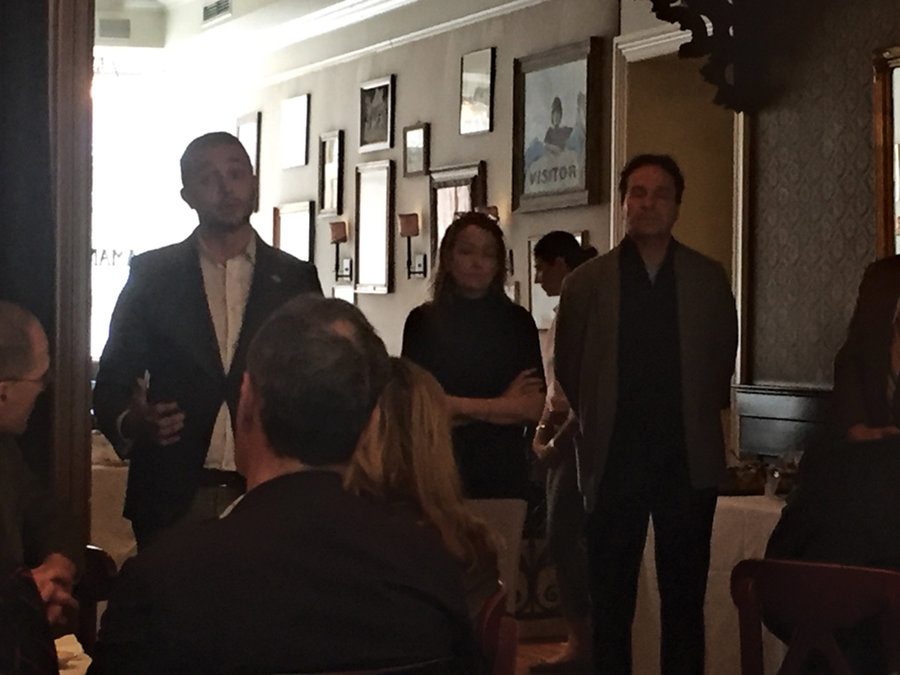 Roughly 25 people attended a round table breakfast hosted by the Hoboken Chamber of Commerce last week.
×

Roughly 25 people attended a round table breakfast hosted by the Hoboken Chamber of Commerce last week.

Members of the Hoboken City Council met with about 25 business owners on Wednesday, April 19 for a roundtable breakfast hosted by the city’s Chamber of Commerce, to discuss possibly expanding the central business district.
The city’s zoning code defines the district as the area south of Fourth Street along Washington Street. Heading north on Washington Street — from Fourth Street to Fourteenth Street — the area is zoned R-1 residential, despite the many ground floor businesses in its buildings. This means the code makes it harder for certain types of establishments there get Planning Board or Zoning Board approval, including restaurants. In that area, restaurants are technically not a permitted use and must get a variance to open.
Councilman Michael DeFusco and Councilwoman Tiffanie Fisher suggested expanding the borders of the central business district west along First Street to Willow Avenue, from First and Washington Street north to Fourteenth and Washington streets, and west along Fourteenth Street to Willow Avenue.
DeFusco said that would make it easier for small businesses to open and thrive. He has written up an ordinance to expand the district and hopes it’s on next month’s council agenda.
“Although current businesses in these areas are grandfathered in as permitted uses, any new businesses are not permitted as of right, according to current city zoning,” said DeFusco. “The process of obtaining approval from either the Zoning Board of Adjustment or Planning Board can be arduous and it can be costly.”

Not too hard to change

According to DeFusco, it wouldn’t be expensive to change the law, but the city thinks it is. He said the city has to notify residents within 200 feet of the proposed change to the district.
“In my mind, that’s 200 feet of the proposed change,” said DeFusco. “In the administration’s mind, it was actually 200 feet around the residential district, which takes the notification from $12,000 — in my interpretation — to over $100,000 in the administration’s reading of it.”
According to Fisher, some people have said this undertaking could be part of the city’s reexamination of the master plan, which would give the city recommendations for future zoning.
“We want to do it sooner rather than later,” she said. “We don’t want to wait for a process that could take a year, year and a half.”

Chamber President Richard Mackiewicz said the Chamber has been working with City Hall to start the process and hopefully update the zoning code.
“It’s time for regulations to catch up with the reality,” he said, adding most residents already view these areas as the business centers of town. “We all recognize that the Washington Street corridor is the business corridor. Unfortunately, for purposes of zoning, it’s not designated as such. What does that do if a business is going to open or basically trade hands and go from one particular use to another? It could trigger a number of various requirements … and the cost of that can be dire, especially to a business that is just looking to start up.”
Mackiewicz said this is one of the reasons some businesses are choosing to open in Jersey City instead of Hoboken lately — but he believes the central business district rezoning could help change that.
_____________
“You would’ve thought I was trying to get approval to operate a methadone clinic and not a Shake Shack.” – John Nastasi
____________
“Now there have been anecdotal statements made for the past several years that opening a business in Hoboken becomes difficult, arduous, expensive, and in-fact something people shouldn’t even do,” said Mackiewicz. “I know there are many people who guide their clients, customers, what have you, to Jersey City, because of the fact there seems to be a greater, more business-friendly environment there.”
Local architect John Nastasi, of Nastasi Architects, agreed that the zoning should be updated. He said business in Hoboken is made more difficult by the “conservative” Zoning Board.
“I was at the Zoning Board from 7 p.m. until 11 o’clock last night at a hearing to get approval for a Shake Shack on Washington Street,” said Nastasi. “You would’ve thought I was trying to get approval to operate a methadone clinic, not a Shake Shack. The Zoning Board has gotten more and more conservative.”
The “Shake Shack” issue provoked some controversy last week. The board was considering approval for a new building that could have included the locally famous burger joint as a tenant, but voted 5-2 against it.
The board was not voting on the Shake Shack, but on the development. However, hungry Hobokenites blasted the move, as did some town officials.
Mayor Dawn Zimmer took to Twitter on Wednesday after news of the decision made hudsonreporter.com.
“I think Shake Shack would be a great addition to Hoboken!” she tweeted. “Not sure of ZBA’s concerns but hope amended application could resolve the issues.”
Zoning Board Commissioner Phil Cohen also wrote his thoughts on Facebook.
“Well I thought that bringing a Shake Shack to Washington Street in a beautiful, modern building that would replace the unsightly surface parking lot next to Walgreen’s was an exciting opportunity for Hoboken and its business district, but unfortunately the majority of my colleagues on the zoning board didn’t see it that way and denied the application,” he wrote.
Friday morning Shake Shack tweeted “Hey Hoboken, no plans for this site or any other just yet, but we’re thankful for the support and hope to see ya soon!”
According to the plan’s architect, John Nastasi of Nastais Architects, they needed a variance from the zoning board for 80 percent lot coverage.
He said the request was reasonable, as the buildings next door have 100 percent and 90 percent lot coverage.
He said the Zoning Board won’t consider any variances due to their “closed minded mentality,” and “myopic view.” He said he had to spend roughly $30,000 for lawyers, escrow, studies, and wait six months for the Zoning Board hearing, only to be turned down.
He asked, “What good is what you’re doing if the Zoning Board is so closed minded?”
Others have complained that the board is not very diverse and has only property owners and no renters, in a town filled with thousands of renters.

In order for the zoning to change, the council will need to introduce the changes in an ordinance at a council meeting. This ordinance would then go before the Planning Board for comments and recommendations. Then the council would hold a public hearing and give legal notices to property owners within 200 feet of the change. Then it would be presented to the council for its second and final reading.
DeFusco pointed out that the last master plan has never been codified, which is another reason he has decided to move ahead with the ordinance.
Marilyn Baer can be reached at marilynb@hudsonreporter.com.