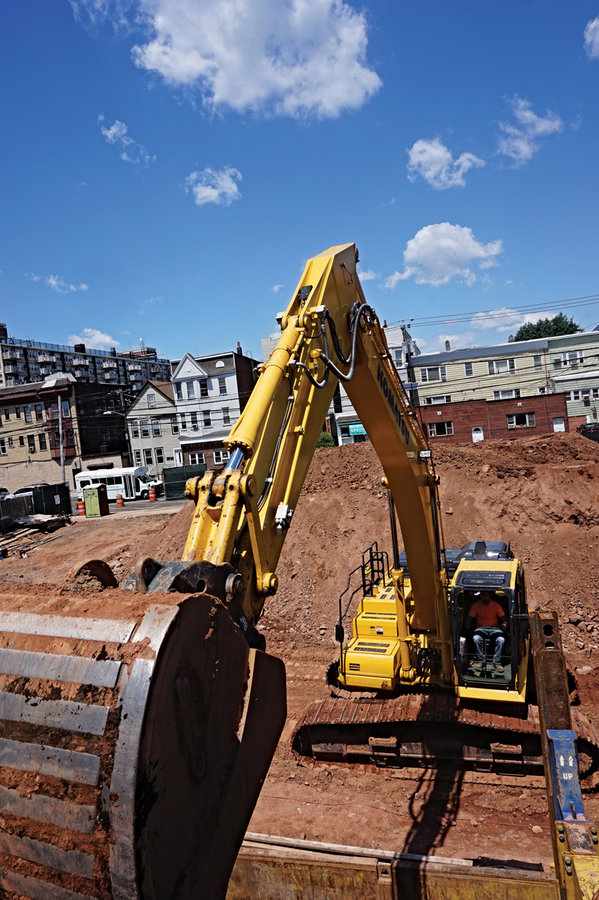 1 / 2
Excavators like this one on Avenue E outside the 22nd Street Light Rail Station are common sights in the ever-evolving city of Bayonne. 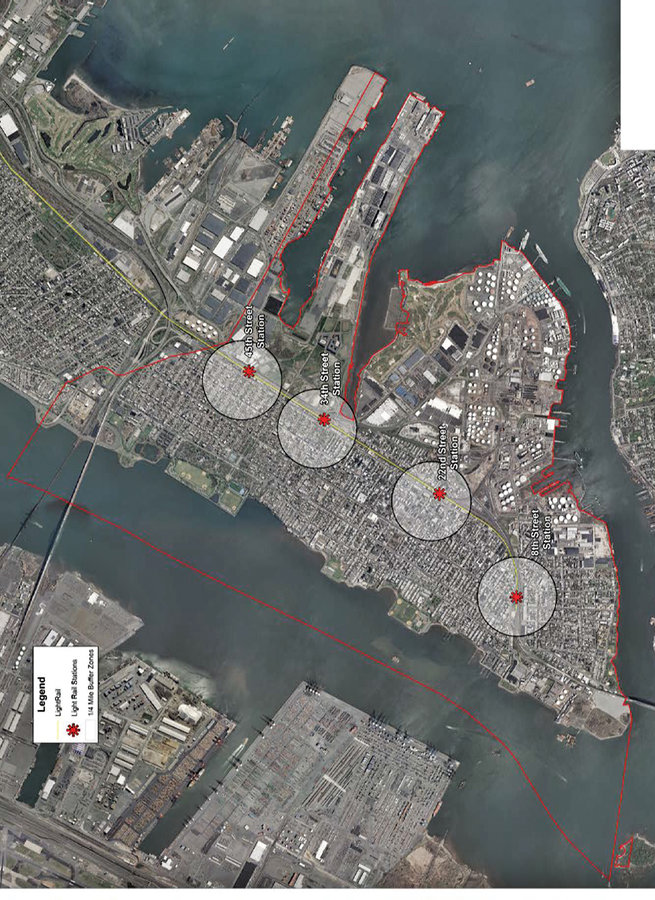 2 / 2
The re-examined Master Plan proposes designated “transit villages” within a quarter-mile of light rail stations that will have denser development.
×

1 / 2
Excavators like this one on Avenue E outside the 22nd Street Light Rail Station are common sights in the ever-evolving city of Bayonne.

2 / 2
The re-examined Master Plan proposes designated “transit villages” within a quarter-mile of light rail stations that will have denser development.

Bayonne’s latest Master Plan is undergoing a re-examination. Master plans outline the long-term vision for a community’s built environment and guides decisions about land use while promoting quality of life. The re-examined Master Plan is 175 pages, and mostly reiterates the last draft, which was written in 2000. But it opens a window into the future of an up-and-coming city that wants to change for the better.
The city has updated dozens of redevelopment plans according to contemporary planning principles, especially in the areas surrounding light rail stations, to create more high-density and mixed-used development. The Master Plan maintains those policies.
Neighborhoods around light rail stations will continue to change. The plan recommends the city establish “station area plans” for those neighborhoods within a quarter mile of a light rail station as “transit villages,” that would continue the current trend of high density mixed-use residential development that encourages walkable neighborhoods and the use of cycling and public transit.
“Our assets are our charm and home life,” said Bayonne City Planner Suzanne Mack, who wrote the 2000 plan. “We’ve moved from being an industrial giant, an oil tank farm basically, into more of a bedroom community with a lot of community resources.” The plan reflects residents’ changing vision of the city, reconciling differing views on where large developments should go and how big they should be.
To do this, the plan creates two tiers of zoning. “Catalyst” projects would allow for buildings between eight and ten stories, and require those developers to create public open space, while “non-catalyst” projects would be between four and eight stories.

You can get there from here

The plan also proposes crosstown “rubber trolleys,” buses that resemble trolleys, that would transport residents from the city’s western shoreline along Avenue A to the light rail stations on the city’s east side. Currently, west side residents have a long walk to get to a light rail station. Many end up driving and parking on the east side of town; east siders are not amused.
The plan also proposes the city eliminate its current parking tag policy in favor of one that issues tags by neighborhood to prevent a parking shortage in neighborhoods around light rail stations. The proposal would allow visitors to buy daily, weekly, or monthly passes.
Parking is an increasingly limited resource in Bayonne, and will continue to be a big issue until residents drive less. According to Mack, that might start with the newer, younger residents whose lifestyles are more likely to embrace mass transit.
“When we get a concentration of young people living in those [new] buildings, then you’ll start to see a demand for less parking, which we don’t have right now,” Mack said. “It has not happened in Bayonne yet. But it will happen over time.” However, Mack noted that residents in cities like Hoboken and Harrison who have ample access to public transit, often still prefer driving.

The new transit idea is similar to Hoboken’s “The Hop” bus program. However, limited funds may hinder transit proposals like a rubber trolley. That does not mean that Bayonne will never get there. The master plan process is designed to push the envelope and encourage residents to think constructively about how to solve local problems.
“It’s where people would like to go, but not where we are yet,” Mack said. “There is definitely a need for crosstown service, but it may not be the highest priority right now. All these services are nice if you have the funds to develop them.”
Not included in the Master Plan is an aerial gondola that would take Staten Island commuters over the Kill Van Kull to the 8th Street Light Rail Station. Mack thinks the concept may be too costly.
New for the 2017 Master Plan is an emphasis on sustainable design. The plan proposes protecting landscapes and water resources, and minimizing the consumption of non-renewable energy in order to “balance long-term economic, social, and environmental needs.”
The plan suggests the city promote “sustainable development,” for which most new development would qualify. New buildings are efficiently designed, using less water and electricity than older buildings, making them technically more “sustainable.” The density of new development alone is technically more sustainable because residents share more natural resources, like water and electricity.“The world has changed and the plan is recognizing that,”Mack said.
The re-examined Master Plan is published on the city website, which city officials have urged residents to examine and comment on. The document is dense, but for residents who want a comprehensive look at the city’s progress – residential, recreational, and commercial –the document is a treasure trove.
DMR Architects, the contracted firm that wrote the plan, did so by surveying more than 800 residents and holding community workshops to gauge the sorts of change Bayonne residents want in their neighborhoods. The plan is due to be adopted by the city council on August 15.