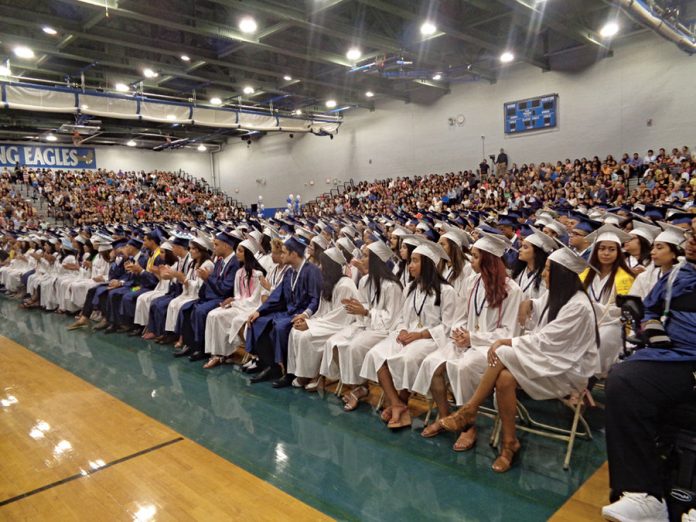 Among the 849 seniors who filled Union City High School’s auditorium June 23, senior Itzel Alvarez’s presence exemplified their never-give-up attitude. “I got pregnant at the age of 16,” revealed Alvarez, 18, as she displayed a cap saying, “Bella, Mommy did it!” as her colleagues continued filing in. “People really didn’t think that I was going to graduate high school.”
Alvarez’s graduating class earned around $20 million in scholarship offers, including financial aid. The class valedictorian was Isaac Ortega, who will head to Harvard University.
In an interesting occurrence, the school actually has two salutatorians this year (tied for second in class rank). Genesis Osorio will attend George Washington University; Chantal Chacho will attend St Peter’s University. They were speakers for the ceremony, alongside fellow student Kevin Hernandez, who led the auditorium in the National Anthem and gave a few words to his classmates.

“We are all America, because we are all striving for a better tomorrow,” Hernandez said. “Never forgetting how lucky we are to be in a country others will never see. We are America not because we are the people who have the right to do what we want, but the people who have the opportunity to do what is right.”
Hernandez will attend the United States Military Academy in West Point in July.
“This is one of the most successful graduating classes of the Union City High School,” Superintendent of Schools Silvia Abbato said before the graduation began. “We have students going to Brown University, to Harvard, Columbia, NJIT, Rutgers – all the Ivy League and top schools.”
“Thank you for giving the administrative team and myself such a wonderful year,” said Principal Ryan Lewis to the grads. “The class of 2017 will perhaps go down as the most decorated class that we’ve had since the school has opened.”
Educators honored at the graduation included Peter Drozd, the 2017 recipient of the Princeton Prize for Distinguished Secondary School Teaching, from Princeton University; and Christine Enrico, the Governor’s Educational Services Professional of The Year.
The Union City High School Teacher of The Year Award went to Mileydis Tinoco, a Spanish teacher at the school. In a statement she left in the graduation program, she said, “This award does not only belong to me, it also belongs to my dear students, peers, and administrators. I am very happy to be part of this amazing institution and a wonderful community.”