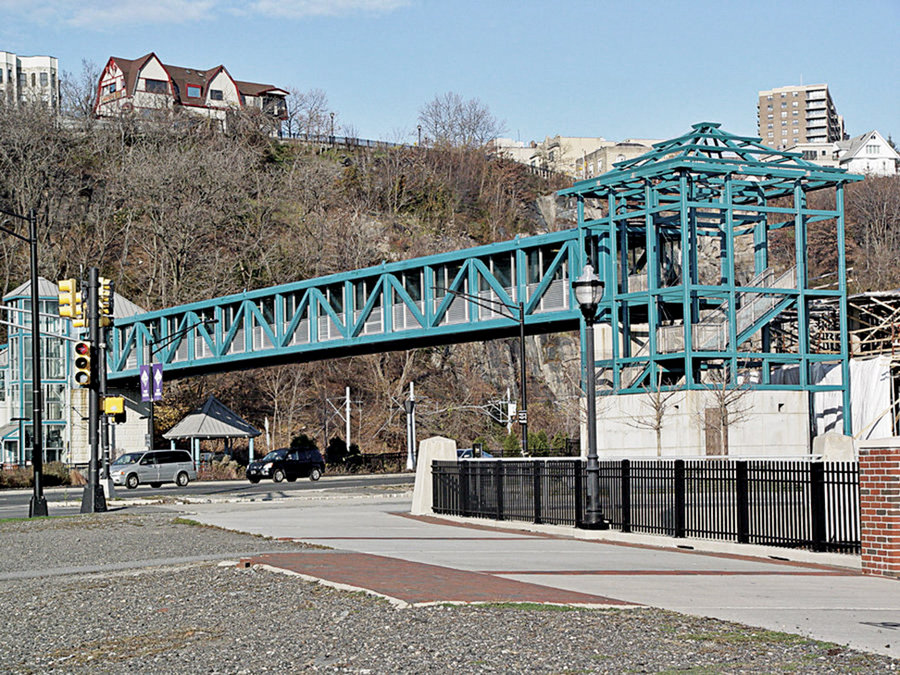 1 / 2
Projects like the pedestrian walkway in Weehawken, aka, the “Bridge to Nowhere,” may have been better designed and financed with more community input. 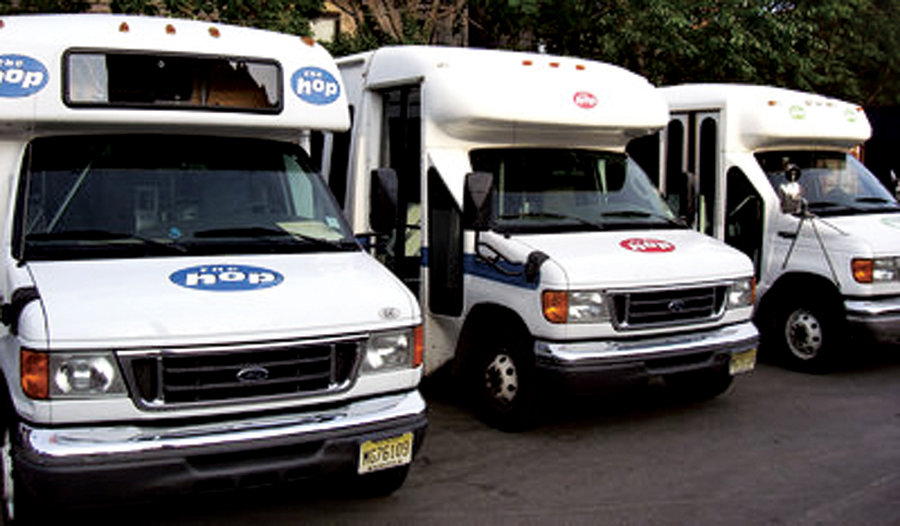 2 / 2
Bayonne wishes it could emulate Hoboken’s HOP shuttle bus system that transports residents to public transit stations in the city. Financing and political will can hold it back.
×

1 / 2
Projects like the pedestrian walkway in Weehawken, aka, the “Bridge to Nowhere,” may have been better designed and financed with more community input.

2 / 2
Bayonne wishes it could emulate Hoboken’s HOP shuttle bus system that transports residents to public transit stations in the city. Financing and political will can hold it back.

Cities across the country are in revival mode. Neighborhoods once isolated are now connected. Once dangerous roads are now safer for pedestrians and cyclists.Towns are facilitating projects that bring with them increased commerce and housing.
But those projects need financing, and when a city doesn’t have enough money, it borrows. Typically, municipalities issue municipal bonds to cover the costs of a project, which a bank underwrites. Then,the municipal government pays interest to the bondholders using residents’ taxes.
Meanwhile, bondholders live all over the world, oblivious to the projects they’re helping to finance and the community paying them interest. Bonds can also be part of an index fund managed by a securities firm, so investors do not have a direct relationship with the projects they finance.
That’s the old way of municipal finance. But today, cities are experimenting with new financial technologies that can tap financial resources from more people at the local level, giving residents investment opportunities and a stake in the project’s success. They’re called “mini-bonds.” Like the name suggests, mini-bonds are types of municipal bonds that are issued in smaller denominations. While the threshold to purchase a municipal bond is $5,000, mini-bonds can be issued in denominations of $500 or $1,000, or however much a municipality decides. Purchasers are paid back in tax-free interest over the bond’s life span.

Do well by doing good

“Theoretically, it’s a nice idea, but there is some risk,” said Professor Thomas Davis of the Bloustein School of Planning and Public Policy at Rutgers University. Davis has experience dealing with mini-bonds, but it’s not been positive.
Mini-bonds played a significant role in the demise of his former employer, Lehman Brothers, when each bond had to be marketed the old-fashioned way by going through big investment banks, which put up barriers to investment, such as trading fees ($50 for an equity trade, for instance).
“The main thing that you want to look at to make it viable is the revenue stream,” Davis said. Ideal for the use of mini-bonds would be small-scale projects that many residents in the community can get behind.
Bayonne’s Master Plan explores the idea of a crosstown bus system similar to the HOP system in Hoboken to transport residents to the light rail stations. Westside residents are excited at the idea of not having to drive across town and find parking, while residents near light rail stations would like to see their parking preserved.
Projects like this are deemed financially unfeasible by pragmatic local officials, but mini-bonds theoretically could help expedite projects that have public support while giving residents more control over their built environment. “It can be a little tricky, and there would be an art to it,” Davis said. But it is possible.
The City of Bayonne considered issuing them in the past without new financial technology, but ultimately decided against it. “A number of years ago we had looked at it,” said Bayonne Chief Financial Officer Terrence Malloy, noting that the cost of issuing the bonds and keeping track of the payments was too costly to make it worthwhile for the city. “It just didn’t make sense for us at the time.”

Opening the door to opportunity, and risk

According to a white paper from the conservative Brookings Institute called “Changing Patterns in Household Ownership of Municipal Debt,” the percentage of Americans who own state and local government bonds is shrinking. In 1989, 23.8 percent of all municipal bonds were held by the wealthiest 0.5 percent of Americans. In 2013, that same group owned 42 percent of all municipal bonds. The percentage of Americans who own municipal bonds is down, too, from 4.6 percent in 1989 to 2.4 percent in 2013.
“If you want to complain about cracks in your sidewalk or in your bike lane, put your money where your mouth is,” said James McIntyre, a former investment banker at Morgan Stanley and UBS who now works for a San-Francisco-based startup called “Neighborly.” This digital municipal bond brokerage firm contracts its proprietary software to municipalities to market mini-bonds to local residents.
McIntyre said one of the greatest benefits of Neighborly, and other digital brokerage companies, is its potential to create stakeholders out of community members rather than onlookers. Purchasing a mini-bond from Neighborly is easier than going through a brokerage house. A simple application lets residents purchase mini-bonds through a digital shopping cart.
“We think financial technology can help lower that cost structure around lowering transactions,” McIntyre said. He sees this new form of financing as an addition to bond financing, not just an alternative.
“When you’re able to bring all investors to the table, that’s where you’re going to find your total source of capital,” he said. “We want engaged communities that are interested in investing in itself, literally and figuratively.”

Neighborly software is picking up steam, most recently in cities like Cambridge; Burlington, Vermont; Denver; and Lawrence, Kansas. The company has helped sell bonds to build affordable housing in cities in New York and Oregon. Other online municipal bond brokerages have helped fund small-scale projects in other municipalities as well.
Chief financial officers and business administrators are familiar with the concept, but unfamiliar with the new technology and its potential benefits. Officials agree that projects should have community input, but have apparently grown accustomed to a finance industry dominated by big investment banks. One of the hardest parts of issuing bonds is getting competitive bids for them, which is helped by the few powerful investment banks that have access to the world’s capital.
“Even in terms of getting competitive bids, if you go back 20, 25 years, it used to be very common for a small broker or bank to directly buy your bonds and sell them to their customers,” Malloy said. “It used to be localized. Now with these very large money market funds and tax-exempt funds, that is where the money is going.”
Malloy’s comment points to the great irony that resources are most available to individuals and communities in the least need of resources.

Is big investment banks’ entanglement in municipal finances good in the long term? “Unfortunately I have to lean toward no, because they’re in it for the profit,” said Davis. “And the places that usually need public financing need that for a reason. It’s because they need help. However, if areas that are more in need of financing are willing to pay a higher interest rate, then the investment banks will be interested.”
Davis and local officials agree that the technological innovation and sophistication of investment banks are indispensable resources for municipalities, but mini-bonds can play a vital role in opening investment opportunities to residents and getting the community more involved.
In places with less growth and a more stable tax base, like Secaucus, mini-bonds may not be as feasible.
“We haven’t looked at [mini-bonds] maybe because we’ve just been very fortunate with our tax revenue,” said Secaucus Business Administrator Gary Jeffas.“We’ve had a good tax base to be able to fund most of our projects.”
Secaucus doesn’t typically fund small-scale urban projects like pedestrian walkways or street redesigns. In the future, though, anything is possible, especially now that mini-bonds are less costly to market. “Would it be feasible for something Secaucus does in the future?” Jeffas asked.“It might be something we explore.”

Should building inspectors be replaced with private contractors?