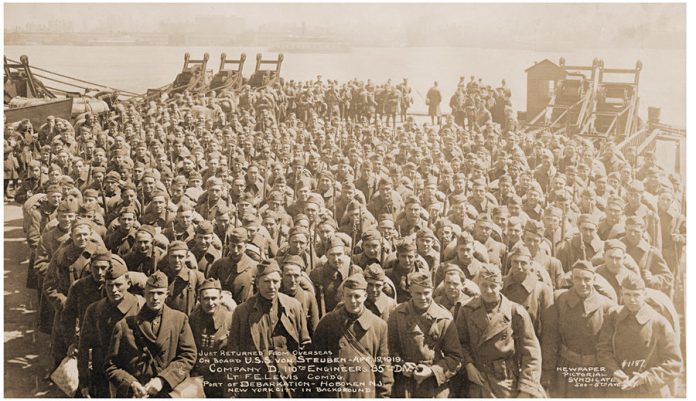 HOBOKEN — A new exhibit is running at the Hoboken Historical Museum until Dec. 23. “World War I Centennial: Heaven, Hell or Hoboken,” was to kick off with a free opening reception on Sunday, Aug. 4 from 2 p.m. to 5 p.m. at the museum,1301 Hudson St.
The exhibition focuses on the transformation of Hoboken and its residents after the U.S. entered World War I and converted the city into the main port of embarkation for the U.S Expeditionary Forces destined for Europe. The exhibit will evoke life in Hoboken during the Great War through silent films of soldiers gathered at the Hoboken port, and will include government war posters, on loan from the Jersey City Free Public Library.
Personal photographs, letters, uniforms, and commemorative items will also be on display and reveal the unique contributions and perspectives of Hobokenites, including Mrs. Frank R. Markey, who worked with the Red Cross assisting soldiers, and Peter G. Spinetto, who regularly wrote postcards from the fields in France to his family on the city’s west side.
They will be displayed along with Spinetto’s helmet, adorned on the interior brim with the names of places he traveled to, as well as the photographs he sent home.