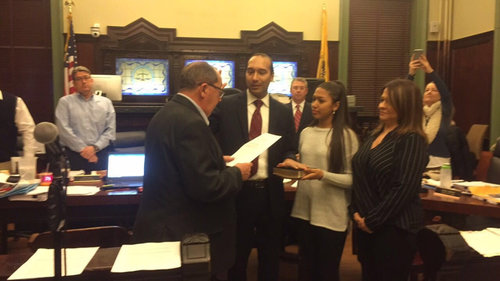 HOBOKEN– During the first Hoboken City Council meeting of the new year, the council reorganized under new leadership.
Councilman Ruben Ramos Jr. replaced Councilwoman Jen Giattino as council president (as a source suggested in our article last month) and Giattino replaced Councilman Peter Cunningham for Vice President.
Ramos and Giattino were the only people nominated for president and vice president and they each won with a 7-0-2 vote. Councilman Jim Doyle and new Councilwoman Emily Jabbour voted “present.” It was Jabbour’s first council meeting. Both of them were the only council members who ran for office with newly elected Councilman Ravi Bhalla.
Ramos was nominated by Giattino and seconded by Councilman Michael DeFusco, and Giattino was nominated by Cunningham and seconded by Ramos.
For more information on the council meeting look to this weekend edition of the Hoboken Reporter or go to hudsonreporter.com starting Sunday.

Jersey City man and convicted felon charged with possession of a...