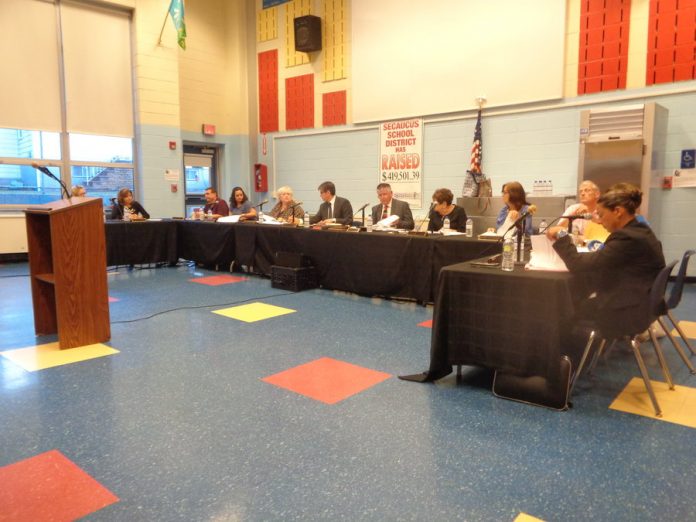 SECAUCUS — At their June 28 meeting, the Secaucus Board of Education approved a controversial, multi-principal transfer between the district’s grammar and high schools. The most striking transfer was moving High School Principal Bob Berckes to serve as Clarendon School’s new principal.
The district suspended Berckes as Secaucus High’s principal in April over an incident involving a student who’d allegedly brought a knife and drugs to school. Earlier this month, he filed an intent to sue Superintendent Jennifer Montesano and the entire school board for $5 million, claiming distress from his removal and unjust process.
Thursday night’s 6-3 decision to transfer Berckes and two other principals drew considerable ire from parents and educators, who blasted the board, questioning why the transfer was happening now. Some wondered why the district would give another job to someone they suspended.
“You had no unanimity in the suspension of Dr. Berckes,” said Secaucus resident Donna Barabas, a former teacher at Jersey City’s Dickinson High School, speaking after the board vote. “You never described the process. How is this done?”
Local activist Tom Troyer insinuated the board transferred Berckes as a quid pro quo to stop his litigation.
“Why now do you transfer him?” Troyer asked. “Why now do things change? Maybe its because if you do go to court, you’re not going to win.”
He also urged Berckes, who was present but did not offer any comments, to continue his lawsuit if he is unhappy.
Earlier this week, Mayor Michael Gonnelli filed OPRA (public record) requests to discover how much the district has been paying Berckes since his suspension, and for board attorney Stephen Fogarty in legal fees. He also spoke at the meeting.
“When I called the superintendent, but did not get an answer [regarding] moving the principals, I kind of took it as a slap to the face,” he said. “I should’ve gotten a phone call, because I got a million texts that I couldn’t give answers to. This has to stop.”
In other transfers, Clarendon Elementary School Principal Steven Viggiani will now serve at Secaucus High School and Secaucus Middle School Principal Robert Valente will preside over Huber Street School. Linda Wilhelm, who has served as Huber Street’s principal for over five years, is retiring.
Christine Candela, the district supervisor of English language arts and social studies, will become principal at Secaucus Middle School.
“There’s nothing worse than seeing a beloved person in your life and your children’s life move on—I know that,” Superintendent Montesano told parents, in her only statement on the issue at the meeting. “I want you to know than when I make decisions, I do not make them lightly. Please know that the decisions were not made quickly. Their talents will be assets to the buildings they’re going to.”