For Weehawken seniors, history lesson on a hot day 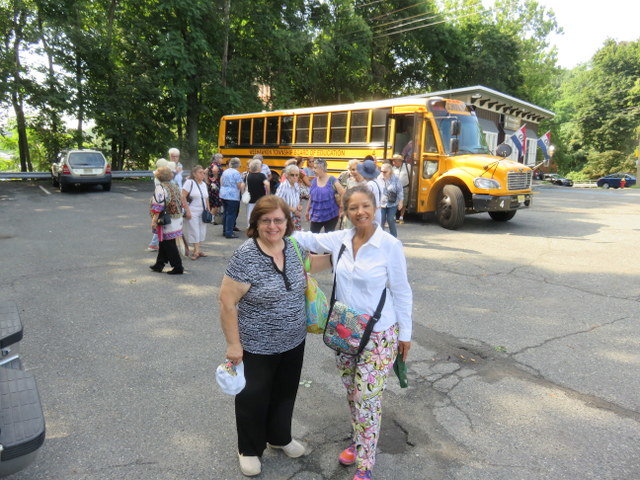 On a hot and humid day, an air conditioned Weehawken school bus took 32 local senior citizens to the Paterson Falls for an excursion to one of New Jersey’s most scenic and historic locales. The trip was sponsored by Mayor Richard Turner and his staff.
Carol Kravitz, senior recreation coordinator for the township, served as organizer and tour guide for the trip along with Park Ranger Miguel Pedro.
In 1791, Alexander Hamilton, first U.S. Secretary of the Treasury, helped found the Society for the Establishment of Useful Manufactures, which encouraged harnessing energy from the Great Falls of the Passaic River to secure economic independence from British manufacturers.
Weehawken has long been linked in history to Alexander Hamilton because of his fatal duel there with Aaron Burr in July of 1804.
Because of Hamilton’s vision, the industries developed in Paterson were powered by the 77-foot-high Great Falls and a system of water raceways that harnessed the energy of the falls, providing power for the mills in the area until 1914 and fostering the growth of the city around the mills. The district originally included dozens of mill buildings and other manufacturing structures associated with the textile industry and later, firearms (Colt revolvers), silk, and railroad locomotive manufacturing industries.
In the latter half of the 19th century, silk production became the dominant industry and formed the basis of Paterson’s most prosperous period, earning it the nickname “Silk City.”
Seniors enjoyed a lunch of wraps, potato salad, coleslaw, chips, cookies, and plenty of bottled water in one of the surviving brick mill buildings.
The trip also included a tour of the Paterson museum, guided by Mohamed Khalil, an artist from Egypt and founder of the Art from the Heart Hamilton Mill Gallery.
These photos were taken by residents Angela and Robert de Zeeuw.