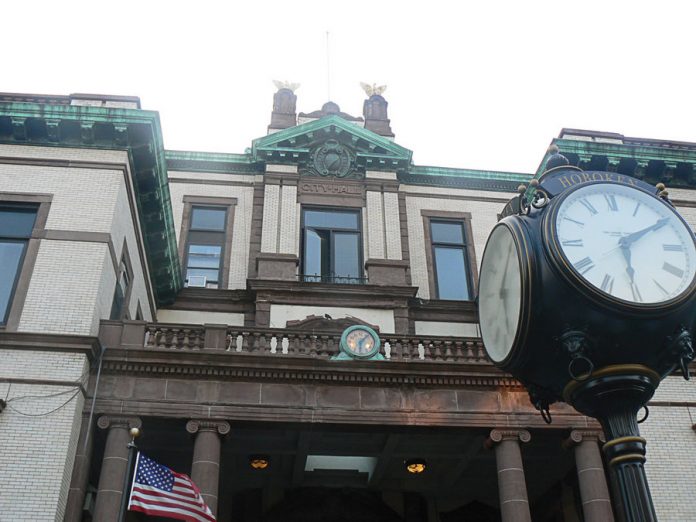 Calicchio, plead guilty on May 7 before U.S. District Court Judge William J. Martini in Newark federal court to an information charging him with using the mails to promote voter bribery from 2013 to 2015 in municipal elections in Hoboken.

According to documents filed in this case and statements made in court in November 2013, Calicchio, Lizaida Camis, and allegedly Dio Braxton and others, allegedly at Frank Raia’s direction, participated in a scheme to pay certain Hoboken voters $50 if those voters applied for and cast mail-in ballots for the November 2013 Hoboken municipal election.

According to the announcement, after the mail-in ballots were delivered to the Hoboken voters, Camis and others allegedly went to the voters’ residences and, in some cases, instructed the voters to vote for a rent control referendum that Raia supported. Camis and others allegedly promised the voters that they would be paid $50 for casting their mail-in ballots and told them that they could pick up their checks after the election at Raia’s office in Hoboken. Raia allegedly instructed Calicchio, Camis, and Braxton that if the ballots did not come back open, the voters would not get paid. Braxton, Camis and others then allegedly checked the ballots to ensure that the voters had voted for the correct slate of candidates, including for Raia, and that they had voted for the referendum that was favored by Raia. Calicchio and others allegedly mailed the completed ballots to the Hudson County Clerk’s Office. After the election, the voters received $50 checks from an entity allegedly associated with Raia.

The count to which Calicchio pleaded guilty is punishable by a maximum penalty of five years in prison and a $250,000 fine. Sentencing is scheduled for Sept. 12, 2019.

Camis previously pleaded guilty to her role in the scheme and is awaiting sentencing. Braxton and Raia were previously indicted, and Rojas was previously charged by complaint.

The charges against them are merely accusations; they are presumed innocent unless and until proven guilty.

“The cash for votes scheme as outlined by the U.S. Attorney’s office is an unfortunate reminder that corruption and dark special interests still play an outsized role in our municipal elections,” said Mayor Ravi Bhalla. “It’s shameful that candidates for public office have been accused of bribing voters, and if true, they should be prosecuted to the fullest extent of the law. I commend all law enforcement personnel for their continued efforts at holding corrupt candidates and elected officials in Hoboken accountable for any and all crimes that were committed.”