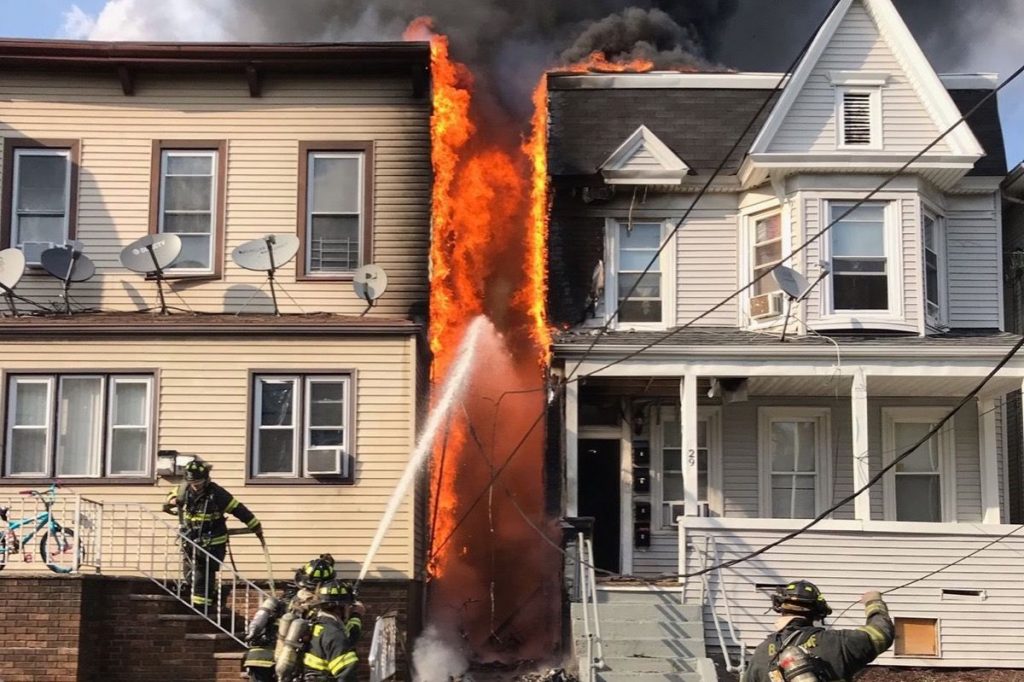 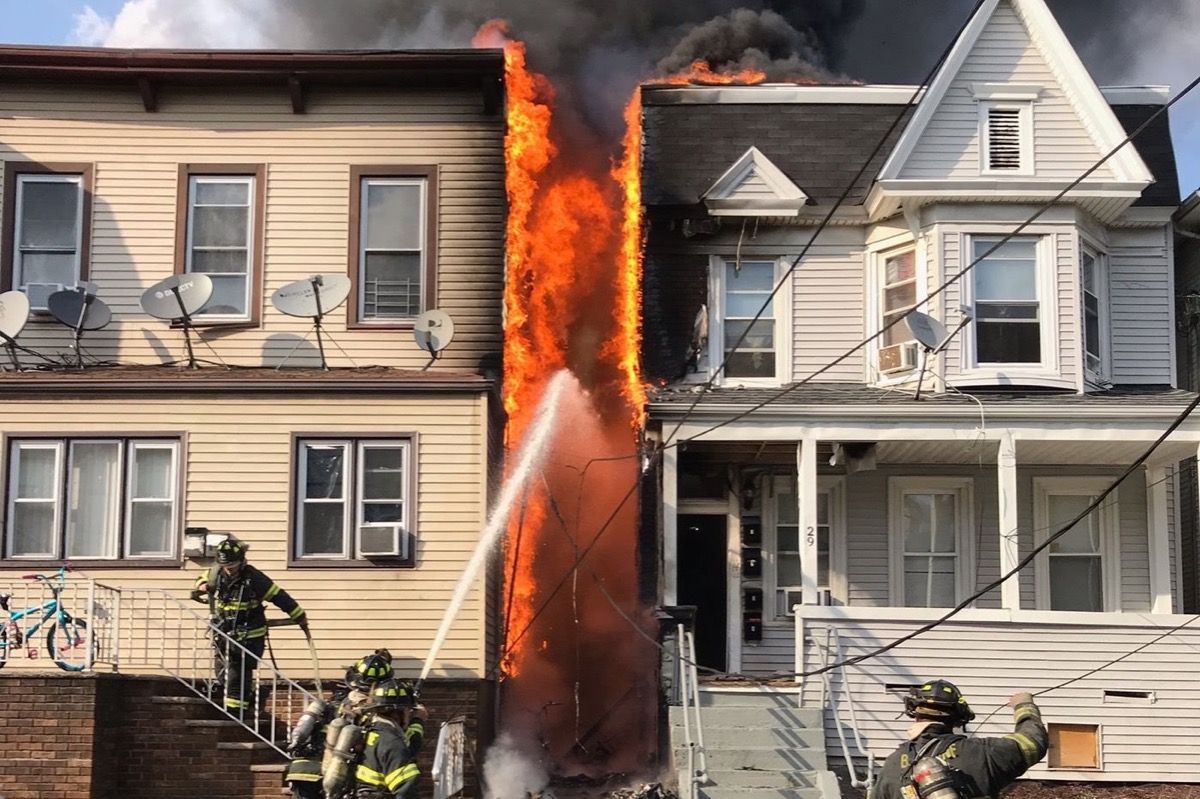 A family of nine was displaced by a fire on 16th Street on July 10.

A 19-year-old from Tottenville apparently ready to jump off the Outerbridge Crossing decided to back away when retired FDNY paramedic Gary Smiley, driving from Staten Island to his home in New Jersey, stopped to talk the teen down, according to PIX11.

“I knew exactly what he was doing, I mean, there is no other reason for you to stop in the middle of the bridge,” he told PIX 11. “I screamed, probably, ‘What the F are you doing,’ and I think I startled him, and he put his foot back down. He then jumped at me, and I grabbed him, and I just held onto him, and he just started crying.”

Smiley, whose mother died days earlier, was a paramedic on 9/11 and was caught under rubble from the fallen towers. The teenager, meanwhile, underwent psychological evaluation at Richmond University Medical Center.

A 28-year-old Bayonne man was charged last week with two counts of sexual assault of a 25-year-old Jersey City woman that happened in June, according to the Hudson County Prosecutor’s Office. The man drove the victim home in his car from Hoboken, and the woman reported that the man allegedly assaulted her on 16th Street at 7:15 a.m. on June 29.

Family survives but loses everything in 16th Street house fire

A fire tore through a 16th Street home on July 10, displacing a family of nine, three of whom are infants. The family recently moved into the building.

“Yesterday we had a tragic loss that none of us ever could have been prepared for,” wrote Faith Garcia on a GoFundMe page for the family. “Our home went on fire, and we lost everything we had, including the medication for the baby.”

The GoFunMe page has a $10,000 goal, more than $3,000 of which has already been donated. The website URL is https://www.gofundme.com/f/cz2zqw-garcia-family.

Kearny chlorine plant ignites for a second time since May

Another fire broke out on the Kearny industrial waterfront on Wednesday, July 10, at the Alden Leeds, which manufactures chlorine for swimming pools. A May fire at the same plant resulted in an air-quality warning to area residents, and the closure of the Pulaski Skyway.

The fire was extinguished more quickly than the last and did not ignite again. The Sierra Club, the state’s most prominent environmental group, is calling for an investigation.

“This terrible situation in Kearny is getting worse, with two fires in two months at a dangerous chlorine plant,” said Jeff Tittel, director of the New Jersey Sierra Club. “There needs to be an investigation into why these fires are happening, putting people and communities at risk. The larger blaze in May was even more threatening and could have been much worse. We were somewhat lucky again that damage from the latest blaze was minimized, but these fires have to stop. Chlorine gas is poisonous and can burn the eyes, nose, and skin and make it difficult to breathe. We have seen problems with the Alden Leeds plant before when there was a huge fire there back in the ’70s. What’s even worse is that New Jersey has hundreds of facilities with even more hazardous chemicals. We need to hold the Alden Leeds plant accountable and make sure these fires don’t keep happening. It is too important for the safety and health of the community.”

Solid chlorine is highly reactive and easily ignites. When burned, chlorine can pose serious health hazards to the respiratory system, eyes, and skin.

CubeSmart Self Storage is the latest new property to open on the west side of Route 440. The self-storage facility opened a 120,000-square-foot storage facility last week on East 22nd Street, bordering IMTT. The seven-story building was developed by NYC-based Storage Deluxe. The opening comes after the opening of Costco, QuickChek, and a retail strip mall off Route 440. The self-storage facility is the area’s second. The company’s competitor, Delta Self Storage, has a facility on the other side of the shopping center on New Hook Road.

Now, as lawmakers gear up to put the budget Murphy recently signed into motion, NJ Transit appears to be on stronger footing. The original 2020 budget set aside $25 million more for NJ Transit than it was allocated last year. The state legislature added $50 million on top of that, according to NJ Spotlight.

The legislation empowers towns and cities to recognize nonprofits, redevelopment entities, county improvement authorities, and municipal departments and agencies as “land banks” that can take over vacant properties quicker than the long-held patchwork system that left many downtown areas without a sense of forward momentum.

“Where some see blight, we see promise,” the governor said at the event. State lawmakers had proposed land bank legislation a decade ago, but it was vetoed twice by previous governors.

Land banks can acquire properties and act as the municipality’s agent to buy liens at a tax sale, carry out lien foreclosures, and take the properties. Properties without legal occupants for six months are considered vacant. Properties in need of rehabilitation, behind on property taxes, or threatening community safety are defined as abandoned.

A look at solitary confinement bill on Murphy’s desk

On June 20, lawmakers passed a bill that would require correctional facilities to restrict the use of solitary confinement under certain conditions. If signed by the governor, the bill would limit the amount of time an inmate could be placed in solitary to no more than 20 consecutive days, and no more than 30 days during any 60-day period. It would give incarcerated people the right to a hearing within 72 hours and a review after every 15-day period, with an independent hearing officer and a written explanation of the placement decision. The legislation would also exempt certain populations from solitary confinement, including inmates age 21 or younger or age 65 and older, among other criteria.

At first, the bill called for restricting solitary confinement to a maximum of 15 days. The limit was set due to research showing anything beyond 15 days could cause irreversible psychological damage, according to United Nations Special Rapporteur on Torture Juan Méndez. Despite the compromise, the bill is a symbolic win, especially for those who are still in solitary confinement.

A Murphy administration-led task force released a major audit report last week. Of the one percent of businesses across New Jersey that it examined, it found that over 12,000 workers lost more than $462 million in under-reported wages and $14 million in benefits last year, such as contributions to disability and family leave, due to a practice called misclassification.

The strategy, which increased by 40 percent over the last decade, is used by employers who pay workers as independent contractors, rather than employees, to save on labor costs. “It’s a practice that this administration wants to see stopped,” said Murphy in a statement.

The report says, “This increase can be attributable to the ‘fissured workplace,’ where firms distribute activities through an extensive network of contracting, outsourcing, franchising, and ownership in an effort to limit legal exposure and increase profits; and is marked by declining wages, eroding benefits, inadequate health and safety conditions, and ever-widening income inequality.”

Mick and the Kahuna perform the classics