More shows on the horizon 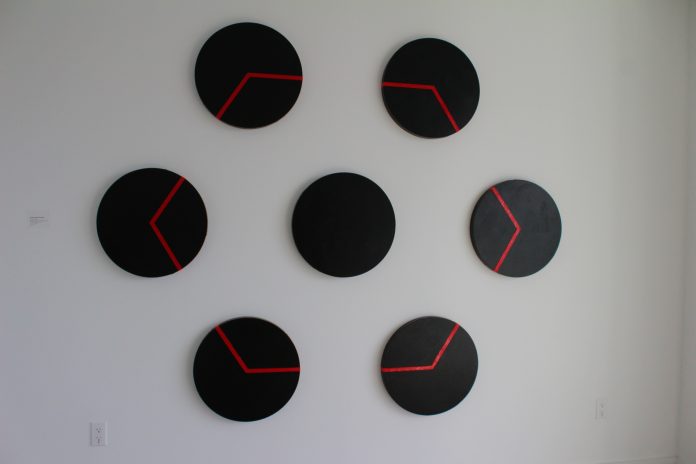 Fort Lee Art Group (FLAG) is a new artist’s collective that recently hosted its first exhibition, “All Media, All Cultures-Beyond Cultural Identities,” with free, public showings at a Port Imperial penthouse in West New York, the newly-developed residential complex Nine on the Hudson.

The venue on opening night was jam-packed. Attendees enjoyed hors d’ouevres and viewed the diverse works of 11 artists curated by Nino Macharashvili.

As the exhibition’s name suggests, the featured artists came from across the globe. Cultural, stylistic, and biographical influences coalesced on the Gold Coast in a collection of contemporary works in several mediums. While some artists were domestic, others had roots in Russia, Georgia, Lebanon, Korea, and other places.

“He was always transient and always tried to find a home through his travels, but accepted transience as an essential quality of his life, and the quality of the world around him,” Creative Director Doug Rizio said.

Rizio said that Khatia Esartia’s paintings feature whimsical, childlike images, in which she channels the feelings of her Georgia childhood. Esartia fled with her family from Georgia in the ’90s during a period of conflict brought on by the Georgian Civil War as well as military tension between Georgia and Russia.

“These paintings are a way for her to recapture her childhood and regain that sense of hope and freedom,” Rizio said.

Bong Jung Kim, a Fort Lee resident who recently emigrated from South Korea, contributed works deeply influenced by the technological advancements that influence contemporary culture in Korea. His mixed-medium works from a series called “Addiction” capture the ubiquitous social isolation and tech addiction Kim feels is prevalent in these times.

Cultural, stylistic, and biographical influences coalesced on the Gold Coast in a collection of contemporary works in several mediums.

Bobby Anspach showed an interactive piece called “Place for Continuous Eye Contact” in which the observer lies under a large LED display while listening to ambient music. The display, and Anspach’s vision, explore the absurd and the otherworldly.

“When he submitted his biographical statement to us, it was so incomprehensible that I just decided to leave it,” Rizio said. “He’s one of those artists who explores the absurdity and ridiculousness of life.”

Tony Seker, the event’s flagship artist, featured several abstract paintings that capture motion and reality. The paintings are derived from his own memory, or from cultural fixtures. Seker, who escaped conflicts in Lebanon as a refugee during his childhood, captured memories of a childhood spent playing backgammon, painting model airplanes, exploring Turkey, and coming to an understanding of one’s identity. Other pieces include an interpretation of the Red Baron, and an impressionistic mashup between Marilyn Monroe and Andy Warhol.

Russian sculptor Irina Deshchenko-Lakshin recently discovered her passion for pottery. Her ceramic works are influenced by various ancient cultures and mythologies, boasting takes on Greek Gods and Celtic design. After studying economics and working in the banking sector, she found her true calling as a potter when she moved to the United States a few years ago.

Leila Shelia is a long-established painter. Her claim to fame is that she was one of the first abstract artists to establish herself and spur the movement in Georgia.

Konstantin Mindadze’s works are large, geometric installations that, according to Rizio, require a challenging assembly. Many of his pieces are large-scale installations with multiple components. Mindadze broke into the contemporary art world with abstract explorations of art scenes in Georgia and the Netherlands.

Lado Pochkua’s contemporary, mixed media pieces were shaped by his experience as a refugee from military conflicts in Georgia, along with his political philosophy, and his art education. His works feature modern takes on classical works, which emphasize a clash between archaic ideals of aristocracy and today’s social and political climate.

Russian-born artist Ekaterina Abramova featured many paintings that tie together ornamentalism, spiritual beliefs, and mythologies from several cultures, religions, and designs from sacred texts. Her paintings feature natural dualism and eastern belief systems, with other influences stemming from religous artwork created after the fall of the Byzantine Empire.

The burgeoning FLAG Art Group hit the ground running with this free, public exhibition, appealing to locals as well as high-end art critics. Another exhibition is in the works. To keep tabs on what the collective is doing, follow FLAG on facebook @fortleeartgroup.