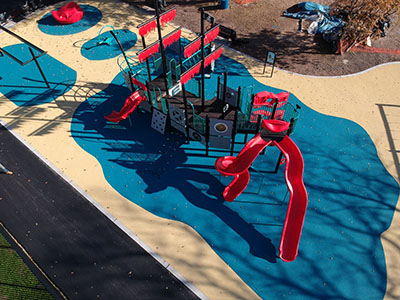 Despite the ongoing COVID-19 pandemic that has infected over 100 residents in the city, plans to continue the renovations at Mayor Dennis P. Collins Park are moving forward.

Constructions workers are considered essential employees and are not bound to the stay-at-home executive order by Gov. Phil Murphy to help curtail the spread of COVID-19 in New Jersey.

Mayor Davis initially announced the continuation of improvements to municipal parks in 2020 on Jan. 13.

The city completed Phase I of the improvements to Collins Park back in 2018. This included new playground and exercise equipment, renovated tennis courts, a new volleyball court, new dog parks, new trees, and benches, among other improvements.

Now Phase II is underway as the renovations to Collins Park begin. Improvements in Phase II include the construction of new basketball courts, playgrounds, and handicapped entrances. According to Mayor Davis, the city will also reconstruct the parking lot.

However, before Phase II can begin, further environmental clean-up efforts must take place at the park.

Chromium in the soil

An environmental remediation began in portions of Collins Park on March 31. This work must be done before the park improvements can be started.

In Phase I, an environmental clean-up of the park removed soil that contained chromium and other elements that were used as fill in the 20th century, according to Mayor Davis. Efforts to remove further contaminated soil will continue into Phase II.

Clean replacement soil will be added to the park. Due to this and later construction activities, parts of Collins Park will be closed temporarily as needed.

Additionally, Mayor Davis told the community that some parking changes will be occurring in the area in addition to the temporary closure of the park.

The contractor for the environmental cleanup at Collins Park will move a portion of the fence line from just north of the curb and in West First Street to south of the sidewalk. According to Mayor Davis, this will enable street parking to resume along the approximately 500-foot-long stretch from the tennis courts to the bathrooms in the park.

In addition, the contractor will move a portion of the fence line immediately to the west of the area mentioned above, from south of the sidewalk to just north of the curb on West 1st Street. This will accommodate the environmental excavation required in the sidewalk area.

However, as a result of the fence shift, no parking will be permitted along the approximately 500-foot-long stretch of the street from around Seaview Court to Islandview Court. Mayor Davis stated that signs announcing the new parking restriction have been posted.

It is not clear when the expected renovations will be completed nor when residents will be able to use the park again.