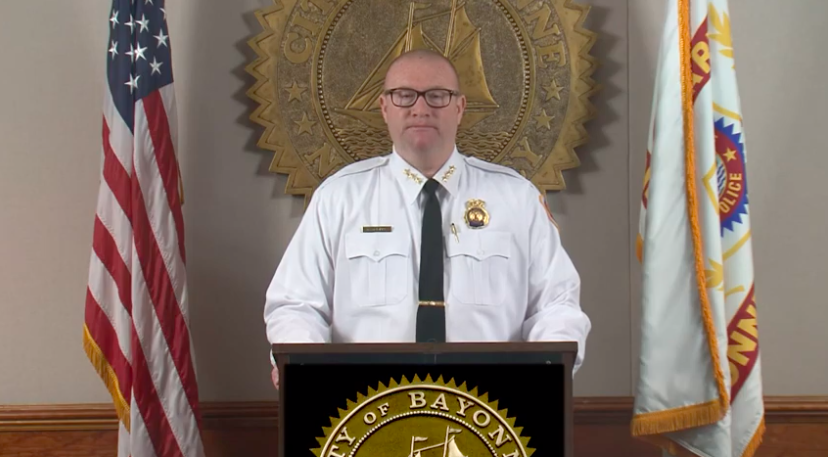 At the onset of the COVID-19 pandemic, Gov. Phil Murphy issued a stay-at-home executive order and social distancing measures to stop the further spread of the virus. These efforts have affected how nearly everything operates, from small businesses to first responders fighting on the front lines of the pandemic.

Bayonne Police Chief Robert Geisler offered insight into the status of the Police Department operations in a video address alongside Mayor James Davis on April 29.

Davis introduced Geisler, reiterating that the city needs to keep going in the same direction as the past few weeks, adhering to measures to flatten the curve. Davis previously declared Bayonne had passed the peak of the pandemic on April 22.

“We’re almost there,” Davis said. “We’re almost at the point where were going to see the light at the end of the tunnel.”

To get to the end of the tunnel, Davis said that residents will need to keep social distancing until further notice.

Policing during a pandemic

Afterward, Geisler took the podium to address the community.

“In the face of the COVID-19 pandemic, the Bayonne Police Department remains committed and dedicated to our mission of ensuring the safety of our community,” he said.

Prior to and at the beginning of the pandemic, Geisler said the BPD made a few changes in operations to help ensure the health and safety of all police personnel so that law enforcement can continue to serve residents.

The BPD continues to operates at full staff, according to Geisler, and staffing has not been an issue during the pandemic. Resources have been reallocated within the department to make police presence more visible within the community.

In addition to the increase in officers on patrol, police have made other operational changes. Social distancing has altered the method in which responding officers take non-emergency police reports.

The PBD has started taking these reports over the phone. If the report can’t be taken by phone, an officer will meet the resident to take the report outside their residence, according to Geisler.

On scene, the officer will adhere to social distancing, staying six feet away.

“These changes have been implemented for your safety and ours,” Geisler said.

Geisler concluded his speach by thanking everyone in the Bayonne community for their support as well as the other local agencies keeping the city afloat during the pandemic.

“One day soon I hope to thank each one of you in person,” Geisler said. “If we stay the course and adhere to the guidelines set for us, we will get through this together.”