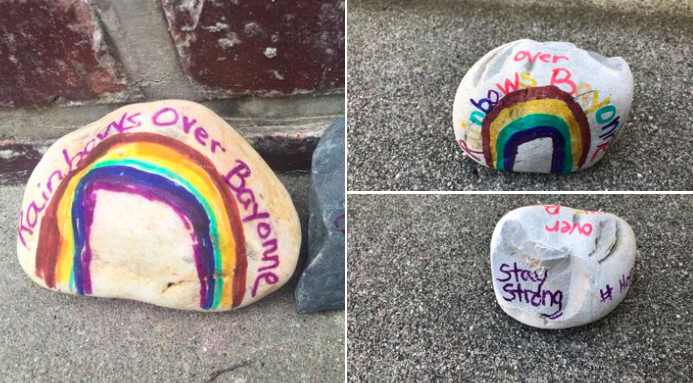 Fear, anxiety, despair, and gloom are just some of the emotions that the COVID-19 pandemic has engendered in residents across the country. However, some Hudson County locals have been working to spark joy and give fellow residents a smile.

Rainbows Over Bayonne has been a sensation recently, in the city and online. Rainbow-painted rocks, sidewalk chalk messages of hope, tie-dye DIY recipes, and rainbow pictures are among the uplifting creations, anonymously bestowed.

Many residents have been given rocks painted with rainbows and the words “Rainbows over Bayonne.”

Many residents are paying it forward by painting and anonymously  gifting their own rainbow rocks.

According to accounts posted on social media, the rocks are secretly left on the porch for residents to happily discover.

Mayor James Davis, who received a rainbow rock, said, “I truly love this city! Jamie and I keep finding these rocks, and they make us so happy and proud!”

The Rainbows Over Bayonne slogan has also adorned sidewalks in an array of bright colors with positive messages.

“Thank you postal and delivery workers,” one message read in front of one of the local post offices.

“Smile,” read another message on another sidewalk.

The chalk message on the sidewalk in front of RWJBarnabas Health at Bayonne on 24th and Broadway, read, “Heroes work here.”

Rainbows Over Bayonne is more of a lose movement than an organized group.

The movement has an online presence that promotes happiness and positive vibes through rainbows.

The Rainbows Over Bayonne Facebook page was started last month by Jaime Lynn. Since its founding, more than 1,440 members have joined the group.

“This group is all about spreading positivity in Bayonne,” according to the Rainbows Over Bayonne mission statement. “Shining a light through an awful storm for all of us to see!”

Residents have been sharing rainbow related content on the page in hopes of brightening each other’s social media feeds. Posts include double rainbows in Bayonne and across the world, tie-dye DIY recipes, and babies in rainbow onesies

Four rules need to be followed in the forum: no selling of any kind, no promotions, self-promotion, or spam, no videos or pictures outside the message of positivity, and no politics.

“Spread the word!” says Rainbows Over Bayonne. “We want to see rainbows and positivity all throughout Bayonne! This too shall pass. #StayHome.”