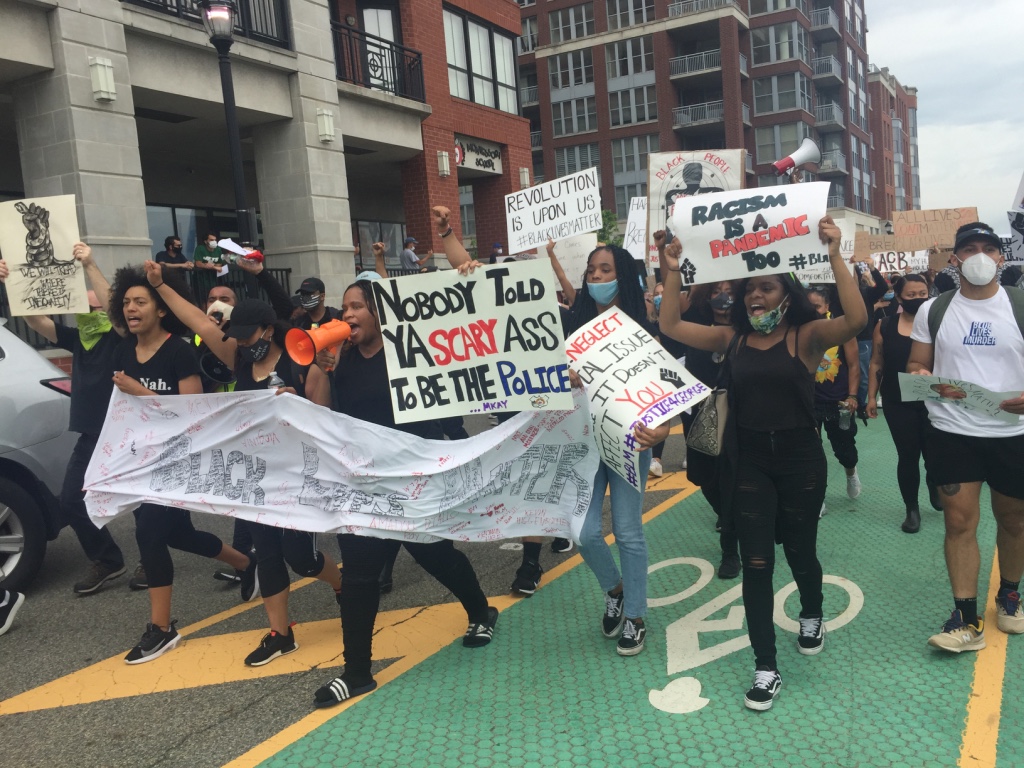 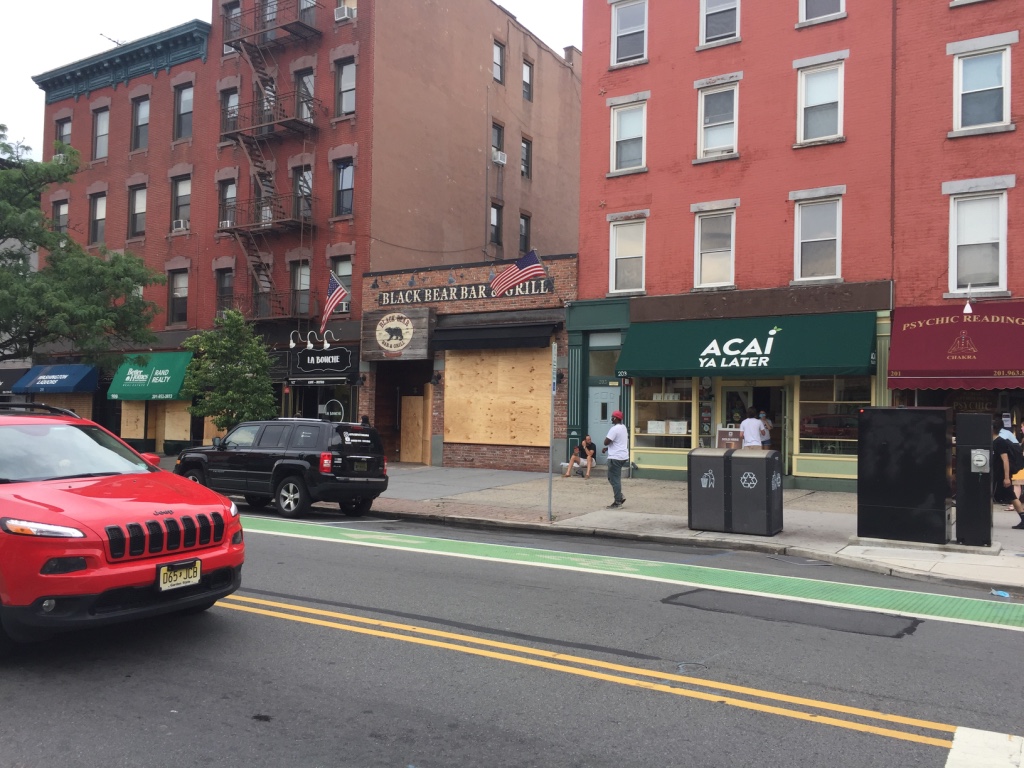 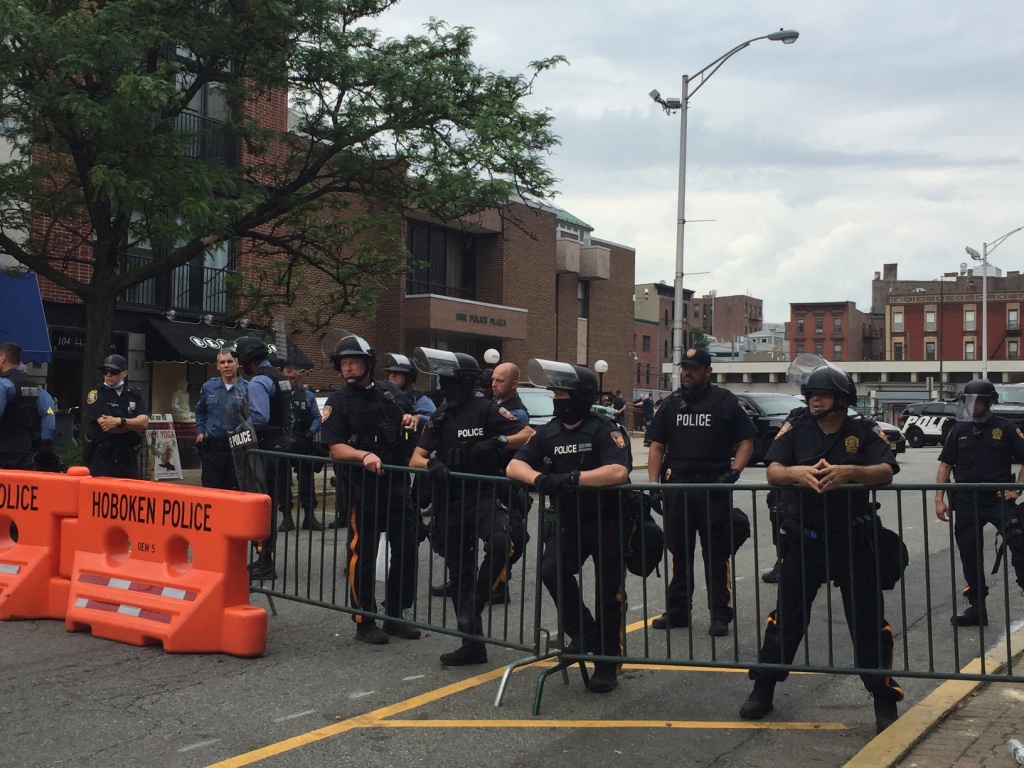 “No Justice! No Peace!” “Hands up! Don’t Shoot” and the names of George Floyd and Breonna Taylor echoed among the high-rise towers as an estimated 10,000 people joined together in Maxwell Place Park on the Hoboken waterfront to protest police brutality.

Like other protests swirling across the country, the demonstration on Friday, which was peaceful, was incited by the death of George Floyd, an unarmed black man who was killed by a Minneapolis police officer who knelt on his neck and back for nearly nine minutes.

“Hoboken! Today we march and we disturb the peace for all the black people we’ve lost due to police brutality and racial injustice!” shouted Keani Esperra of Allies 4 Justice, who organized the protest. “They are your neighbors. They are your friends. They are your coworkers. When you march with us today we need you, our allies, to incite change. We can’t do it alone.”

Organizers urged everyone to register to vote, quizzing the crowd over megaphones on the date of the upcoming primary election on July 7. Pens and registration forms were on hand for those who had not yet registered.

People gathered around and made signs, and listened as organizers and members of the Hoboken community addressed the crowd, voicing the pain of the black community, sharing personal experiences with police profiling, police brutality, institutionalized racism, and the desperate need for change.

“The first time I experienced racism, I was 13 at a predominantly white high school in Westfield,” said Esperra. “A group of boys walked by and called me a N*****. Until that moment, I didn’t pay attention to the color of my skin.”

Uniformed police lined the street near Maxwell Place Park; other plain clothed officers were in the crowd.

Jersey City resident and founder of Black Men United Nevin Perkins urged everyone to take a knee. He told officers and the crowd: “We are not interested in symbolic victories. If you’re taking a knee, take a knee in solidarity. If you are taking a knee to conform, stand the f*** up.”

The protest at Maxwell Place Park was joined by another group that began at the Hoboken Housing Authority, remembering Vincent “Woody” McConnell, a black Hoboken High School student who drowned in the Hudson River after fleeing police in 2004.

Together the group marched south toward Pier A Park along Sinatra Drive, and some police knelt along the way, before the protesters splintered into two groups. Some stayed at Pier A Park, while others gathered outside city hall.

At Pier A Park protesters continued to chant and paused to sing a hauntingly powerful rendition of “Happy Birthday” in memory of Breonna Taylor, a black woman who was shot eight times by Louisville police when they executed a no knock search warrant, killing her in her home in March. June 5 would have been her 27th birthday.

Several speakers joined the protest, including Lawrence Hamm of the People’s Organization for Progress, who is running for U.S. Senate against incumbent Corey Booker.

He said that while he supports no choke holds, and additional reporting, and laws that aim to end racial profiling, police brutality wouldn’t end until police officers lose their badges and go to jail for unjustly killing black people.

“I am so glad to see the rainbow of humanity who wants to build a world without racism,” he said noting the crowd was full of allies.

Mayor Ravi Bhalla spoke at the protest at Pier A, saying he has faced racism as a Sikh who wears a turban as part of his faith. He said that that morning before the protest he signed The Obama Foundation’s commitment-to-action pledge. It calls on cities to review their use of force policies, report its findings publicly, and seek community feedback within 90 days of signing the pledge.

Law enforcement was ready, but…

As the crowds began to disperse from Pier A Park after more than three hours, they saw police officers from several departments at the ready: a State Trooper boat floating near the Lackawanna Terminal, a row of Bayonne police officers standing in front of city hall, state troopers in riot gear behind barricades on Hudson Street near the police station, uniformed North Bergen and Hoboken police and officers from the Hudson County Sheriff’s department on Washington Street.

Despite the law enforcement preparations, the protests were peaceful. No incidents or police brutality were reported, unlike in New York City on Wednesday, in which the NYPD reportedly boxed in a number of protesters in Brooklyn after the 8 p.m. curfew, a tactic known as kettling, before reportedly arresting and hitting protesters with their batons.

Business and property owners seemed to have feared the protest would turn ugly. Many chose to close for the day and board up their storefronts in anticipation of vandalism or looting.

“This is ridiculous,” said one passerby on Washington Street. “This is racist. They don’t do this s*** when it’s SantaCon.”

During SantaCon, one of several seasonal bar crawls in Hoboken, there are often reports of assaults and property damage.

Other businesses handed out free pizza and water to the peaceful protesters or hung signs in their windows reading “Black Lives Matter” and “We support you.”

Hoboken blood drive will be Nov. 6