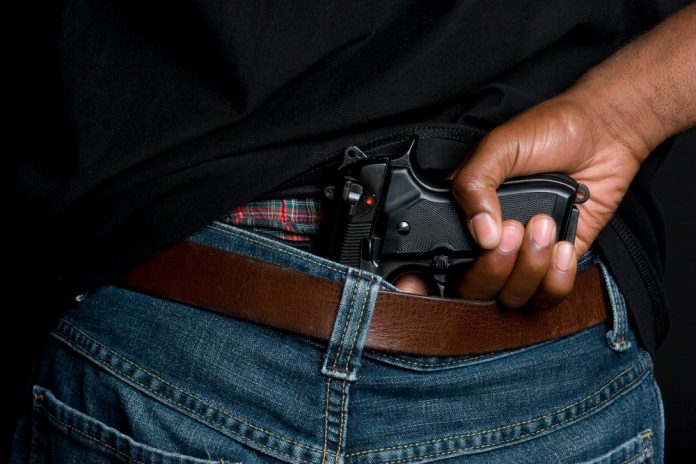 Three alleged members of allied Jersey City gangs were charged with the July 7 shooting of a 12-year-old, according to U.S. Attorney Craig Carpenito.

Marc Taylor, aka “Bando;” Jashawn Tate, aka “Trilly;” and Damari Blackwell, aka “Juggy,” all 18, all from Jersey City, are each charged with one count of assault with a dangerous weapon in aid of racketeering activity and one count of discharging a firearm during a crime of violence.

They were scheduled to make their initial appearances on July 16, by videoconference before U.S. Magistrate Judge James B. Clark III.

According to filed documents and statements made in court, Taylor, Tate, and Blackwell are allegedly associated with three violent street gangs, which have operated as part of an alliance since at least September 2019.

This alliance has operated as a cohesive unit, particularly with respect to retaliatory acts of violence against rival gangs.

According to the complaint, the Rutgers gang has historically consisted of members and associates of the 52 Hoover set of the Crips street gang. It operates primarily in the area of Rutgers Avenue and McAdoo Avenue, as well as within Triangle Park. Given the Hoover Crip connection, those associated with the Rutgers street gang often wear the colors orange and blue. Members also refer to themselves as the “Get Bacc Gang,” which replaces the letter “k” with the letter “c” in to avoid the use of “ck”— short for “crip killer.”

The Marion-300 gang has historically consisted of members and associates of the Brim and Sex, Money, Murder sets of the Bloods gang, operating within the Marion Gardens Housing Complex.

It frequently uses a hand sign associated with the Marion-300 gang, by extending the pinky, ring, and middle fingers and joining the thumb and pointer fingers.

The Curries Woods gang, particularly those who identify as Hoover Crips, refer to themselves as the “Tay Tay Shrimp Gang,” according to the complaint.

Members use the term “Uptop” to refer to their territory.

Given the Hoover Crip connection, those affiliated with the Curries Woods gang often wear the colors orange and blue, as well as clothing associated with the Houston Astros and the New York Mets.

All three gangs are known for drug distribution in and around their controlled territories and for violence against numerous rival neighborhoods.

The three gangs formed an alliance in September 2019, according to court documents.

The alliance between the Rutgers and Marion-300 gangs originated, in part, due to proximity after the 300 subset of the Marion Gardens gang relocated to Armstrong Avenue and Martin Luther King Drive. This placed it closer to Triangle Park, the area controlled by the Rutgers gang.

The Rutgers gang has historically engaged in “retaliatory acts of violence” against the gang that operates in the area of the Salem Lafayette Apartments, commonly referred to as “SaLaf,” according to the complaint.

The Marion-300 gang has historically engaged in “retaliatory acts of violence” against the gang that operates in the area of Wilkinson Avenue, Ocean Avenue, Martin Luther King Drive, and Wegman Parkway, known as “Wilkinson,” according to the complaint.

According to court documents, members of the  SaLaf and Wilkinson gangs have historically associated with the Grape Street set of the Crips gang. These two gangs have maintained an alliance.

The alliance between the Rutgers and Marion-300 street gangs stemmed from their respective feuds with the allied SaLaf and Wilkinson gangs.

Members of both the Rutgers and the Curries Woods gangs have historically been associated with the 52 Hoover set of the Crips street gang. These two gangs have maintained an alliance due to their shared Crips affiliation. The Curries Woods gang has historically engaged in “retaliatory acts of violence” against Wilkinson, according to the complaint.

A feud between, the Rutgers, Marion-300, and Curries Woods gangs is ongoing against the SaLaf and Wilkinson gangs.

The feud fires up

The feud between the three allied gangs and the SaLaf-Wilkinson gangs escalated in late March and early April 2020, according to the complaint.

On March 31, at approximately 8:36 p.m., law enforcement responded to the area of Rose Ave. and Cator Ave. following a report of shots fired. Officers encountered Damone Smith, aka “Munch,” an alleged member of the Rutgers street gang, who had sustained a gunshot wound to the chest. He was transported to Jersey City Medical Center, and was pronounced dead several hours later.

Phillip Wiggins, an alleged member of Wilkinson, was charged with the murder.

On April 1, at approximately 7:55 p.m., officers heard gunshots in the area of Martin Luther King Dr. and Forest Ave. They encountered an alleged member of SaLaf, who had sustained a gunshot wound to his thigh, and Stephanie Jacques, a seemingly unintended victim, with a gunshot wound to her thigh. Both victims were transported to the Jersey City Medical Center and released later that night. The following morning Jacques died of a pulmonary embolism resulting from the gunshot wound.

On April 4, shortly after 3 p.m., law enforcement responded to the intersection of Bidwell Ave. and Ocean Ave. where officers discovered Akim Ward, aka “Kimmy,” an alleged member of Wilkinson, who had been fatally shot in the head.

Tyree Witherspoon, aka “Sonny,” aka “Surf,” and Devon Tutten, aka “Joker,” both alleged members of the Rutgers gang, have been charged with this murder.

On July 6, at approximately 10:34 p.m., Jersey City Police Officers heard multiple gunshots in the area of Sheffield Ave. and Rutgers Ave. They saw a girl later identified as Tyeah Garner, 17, with a gunshot wound to her right cheek.

She was transported to the JCMC and was pronounced dead at 4:36 a.m. the following day.

Law enforcement is investigating individuals associated with the SaLaf-Wilkinson alliance.

On July 7, Taylor, Tate, and Blackwell allegedly drove a stolen Volkswagen sedan to the area of Oak St. and MLK Dr., controlled by SaLaf. They were armed with a Glock 21 .45 caliber handgun and an Intratec AB-10 9mm Luger handgun.

The incident was captured on CCTV surveillance video.

Tate allegedly attempted to evade law enforcement by fleeing in the stolen car but crashed, which resulted in the apprehension of the three alleged gang members.

On the count of assault with a dangerous weapon in aid of racketeering activity, Taylor, Tate, and Blackwell each face up to 20 years in prison. For discharging a firearm during a crime of violence, Taylor, Tate, and Blackwell each face a mandatory minimum sentence of 10 years in prison and a maximum sentence of life in prison, which must run consecutively to any term of imprisonment imposed on any other charges.