'Swallow,' an exhibition of work by Wendell Jeffrey opens August 12 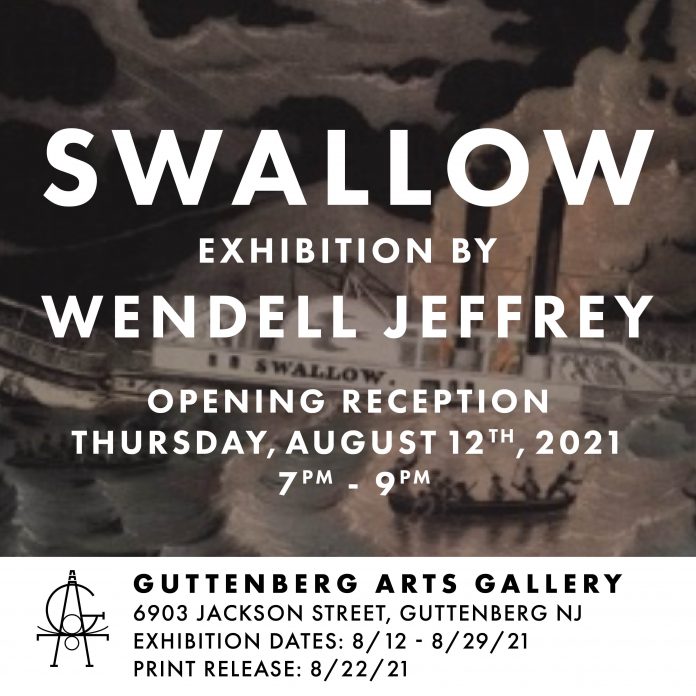 A print release will be held on Sunday August 22 in conjunction with the print fair “Print Riot 4”.  The print by Jeffrey is a chine-collé lithograph editioned to 10 and will be available to purchase on the 22nd.

Guttenberg Arts Gallery is open by appointment only Tuesday – Saturday, 10 a.m. – 4 p.m. and virtually on their website. Patrons can schedule their visit or view the virtual gallery by going to www.guttenbergarts.org/exhibitions.

The installation of work includes drawings, paintings, sculptures and prints which were all loosely  inspired by the wreck of the Swallow.

Artist Wendell Jeffrey explains: The “’Swallow” series traces the event of a shipwreck. I was taken by the idea of how an unscrupulous captain could possibly take a wager and recklessly race his ship in hopes of collecting the winnings, thinking nothing of risking the lives of his passengers and crew. Further exploring these dangers it lead me to the question of what is it that drives us to make these kind of judgements. When does chance cause actions beyond our control. What is it in that moment when the line is crossed regardless to others? It goes without saying that humans are good at causing problems and yet we also have wherewith into create a different story.”

In 1845 on April 7, The “Swallow” left Albany at 6 o’clock on Monday evening, with two or three other boats, to come directly through to New York. She had on board a large number of passengers, three hundred and fifty in all. Passing through the narrow channel at Athens, she ran upon a large rock. The bow ran up so high that it was impossible to stand upon the deck. In three minutes the cabins were full of water. The upper part of the boat soon took fire.

The “Swallow” wreck took place six years before the railroad was to reach Albany from New York. In the absence of a railroad, virtually all passengers, freight and mail moving between New York and Albany did so by steamboat.  It was an era of fierce and unfettered competition. Steamboat racing was a frequent occurrence, the idea being that the first steamer to reach a landing would be the one to get the waiting passengers.

The wreck of the “Swallow” was one of the more spectacular disasters of the era and created a vivid impression all along the river. Occurring as it did before the age of photography, several artists scurried to the scene and soon their impressions of the wreck were immortalized for posterity in lithographs that quickly appeared on the market for sale.

Jeffrey has an MAT in Art Ed from the University of the Arts, Philadelphia and a BFA from the Rhode Island School of Design. Currently a teacher at Ridge High, Basking Ridge, NJ and previously at the Teachers College, Columbia University, NYC, Wendell has completed numerous residencies, including Guttenberg Arts, Vermont Studio Center and Haystack Mountain School of Crafts.