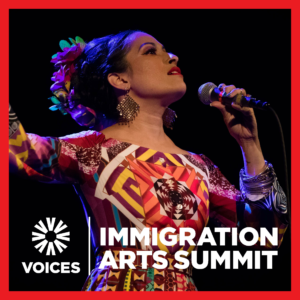 “The Immigration Arts Summit is a natural extension of Voices International Theatre Festival and a meaningful way to approach our theme of art and democracy,” says Olga Levina, JCTC’s co-founder and artistic director and an immigrant from Belarus. “The Summit celebrates immigration as integral to the DNA of America. Recognizing and giving voice to the experiences of our immigrants not only enriches the arts, but it also benefits our collective community and shared understanding of global issues.”

Throughout the afternoon, artists and community leaders will examine what it means to engage ethically with another person’s history and how that engagement can be transformative for individuals and society.

Attendees will hear from keynote speakers Hope Azeda, a leading figure in contemporary Rwandan theatre, and Joseph Patel, producer of “Summer of Soul.” Representing Jersey City will be musician Ariel Guidry and writers Maiya Katherine and Issa Musharbash, authors of “An Apology to My Demons” and “Go Back to Your Country,” respectively, who will host a book signing.

In addition, Adelita Husni-Bey, Italian-Libyan artist and researcher, will screen her film, “Chiron”. Christhian Diaz, a Colombian-American artist and Board Chair of UnLocal, a nonprofit providing free legal representation to undocumented immigrants in New York City, will moderate a discussion and Q&A session. Finally, West African musician and activist Natu Camara will close out a day of cultural exchanges.

Founded in 2006, Jersey City Theater Center is a nonprofit 501c3 arts organization committed to inspiring conversations about important issues of our times through the arts. For more information, visit https://jctcenter.org or contact (201) 795-5386.