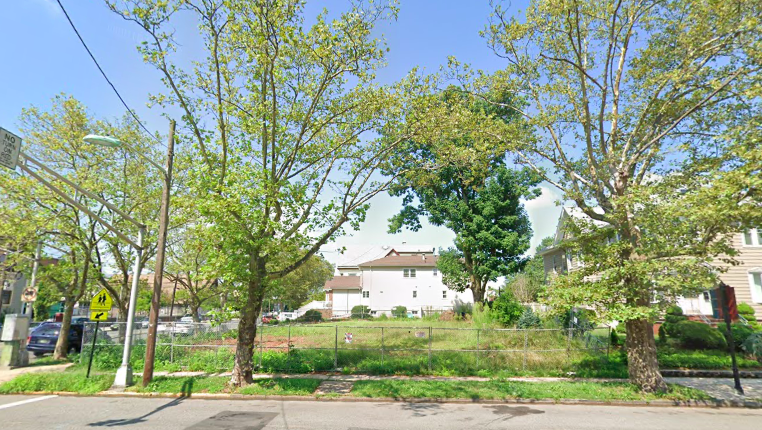 The property at the corner of 5th Street and Avenue C, via Google Maps
×

The property at the corner of 5th Street and Avenue C, via Google Maps

Bayonne is stuck when it comes to holding property owners responsible for their unkept lots, officials said. Resident Mike Morris prompted the conversation at a recent meeting of the Bayonne City Council.

“I have a concern with the enforcement of unkempt properties in Bayonne,” Morris said. “Throughout the entire city, enforcement is not taking place. You have large developers who consistently come before the boards looking for tax abatements for projects while they still have empty lots in various parts of town in our neighborhoods. And they do this with the least of regard for us taxpayers.”

Morris said his neighborhood has an unkempt lot on the corner of 5th Street and Avenue C.

“It’s totally out control,” Morris said. “There’s no enforcement… The sidewalks are in absolute disrepair, in a school zone.”

Morris said the developer who owned the property removed weeds that were growing up from the concrete, but he thinks the council should be more strict with developers.

“When they come in for tax abatements, first make sure their various vacant and unkempt lots are in order before their tax abatements are approved,” Morris said. “Don’t entertain them anymore.”

“I can take you through various parts of the city, every single block, every single neighborhood,” he said. “I’m tired of looking at it.”

Morris suggested that the city be stricter with time frames for cleaning up properties. He said he called City Council President Sharon Ashe-Nadrowski about it, who rectified the issue in 24 hours.

“Initially I was told that it could be seven days, possibly ten,” Morris said. “It’s not acceptable. It should be seven days. Can’t maintain your property? You don’t deserve a tax abatement.” Morris cites the letter sent by the city to property owners, requiring them to to clean up the property within seven to ten days or face a warning and then a fine.

Ashe-Nadrowski agreed that this was a problem and that officials were working to rectify it.

“They consider each letter in each instance a new ten days,” Ashe-Nadrowski said. “So we are trying to effectuate something that would say, ‘Every chance is not another first chance.’ Once you’re a habitual offender, I want to be able to fine them right away, not just wait this whole ten days.”

Third Ward City Councilman Gary La Pelusa said: “For years, I’ve seen repeat offenders who don’t take care of the same empty lots, They’ve been empty for 20 years, 30 years… It’s not fair. I’ve been to the Law Department in years past. This council has tried. I don’t know what the problem is, if its loopholes in the legal system or whatever, but some of those same lots have been empty for 30 years.”

La Pelusa said there shouldn’t be a ten-day period for the repeat offenders.

“I challenge that we do something to change that… It’s not fair to everybody and it’s not even fair for us trying to do something about it and having our hands tied.”

Law Director Jay Coffey said its been more of a practical problem than a legal problem as they city seeks to track the violators. He said the issue lies in the property ownership belonging to limited liability corporations (LLCs) outside of Bayonne.

“A lot of these properties are owned by LLCs that are not in town,” said Coffey. “We get a lien against their property, but it’s just against the property. We fall prey to trying to bring someone into court. Somebody shows up as a representative of the LLC, but it’s not the individual that’s making decisions.”

Coffey said the most that someone can be fined is a little over a thousand dollars, creating an incentive to not care.

“When the maximum they can be fined is $1,250, it’s worth it for them to wait three months, get the notice, and then they spend $800 on the one-time cleanup of their property. It’s a cost benefit analysis that I guess they’re performing.”

Getting better, in a way

However, Coffey added the city has had some luck recently in reaching property owners.

“We are having some success now with contacting lien holders and having the lien holders clean up properties,” Coffey said. “There is a statute that allows for lien holder to essentially determine and demonstrate that the property is abandoned.”

Coffey said the city was doing this for a property that very week: “It’s a place where, I think the husband and wife died in quick succession, the children haven’t taken care of the estate and the lien holder is going to come and clean up the property.”

Regardless, Coffey said the issue largely remains with developers who “know they can get away with it.”

Developers “perform a cost-benefit analysis and say, ‘I could get the potential $1,200 fine, but if I cut the grass every week its going to cost me $7,000,’” Coffey said. “‘I’ll pay the $12,150 fine, pay the $800 to have it cleaned up once and call it a day. And when November comes along, I won’t have to worry about anything anymore.’ That’s not an excuse, just an explanation.”

The solution? Coffey said, “It would take a lot of manpower, and we’d have to be putting in a lot more into our SDL program. I guess it could be done manually, but it’s a heavy lift. But from a fix-the-problem standpoint, it would be the way to go about it.” Coffey is referring to the Spatial Data Logic program the city uses to manage data online.

Morris reiterated that the city should not award tax abatements to developers whose lots are unkempt and urged the council to hold developers to a higher standard.

“If you need more people, hire more people,” Morris said. “The fines will pay. At least two more inspectors… [Bayonne] looks dirty… I understand that we’re going through a phase of reconstruction and redevelopment, which is good, but it hasn’t been done the right way.”