On exhibit at Dollhaus beginning April 8 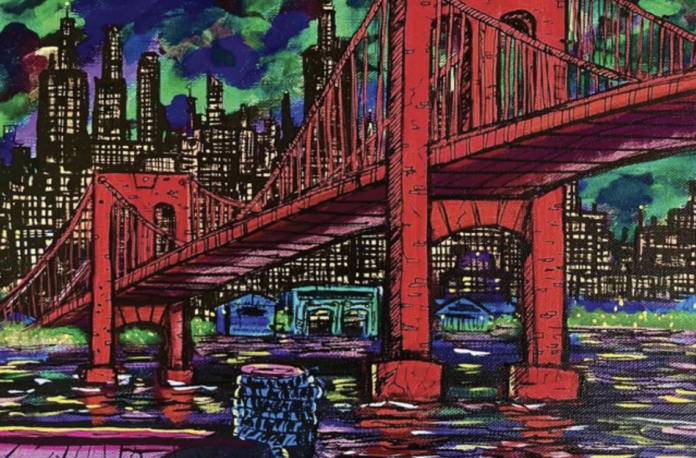 Born and raised on Staten Island and currently living in New Jersey, even from an early age Marina M’s paintings clearly shows how she is mesmerized by the classic Golden and Silver Age comics in terms of simple lines, bold colors and fantastic worlds on each panel.

Her paintings are entranced by classic animation from the 1930s to the 1960s, even taking inspiration from backgrounds of the animated Spider-Man series (particularly the Ralph Bakshi-directed second and third seasons with the jazzy/psychedelic backgrounds and music) as well as the animated Batman series from the 1990s with its dark noir settings.

In addition to previous works from past exhibits, new works include occult themed creatures (Sigil of Lilith, Plague Ritual), literature and television based science fiction (Dune, The Mandalorian and Grogu), surreal scenes based in the depths of imagination, dark psychedelic takes on real places, and dreams (La ville psychedelique, Fleshpot Cinema, Dreamscape #1), comic book characters (The Endless [based on characters from The Sandman]), Doctor Strange starring Vincent Price, The Joker and Harley in the Shadow of the Bat), true crime (The Night Stalker Goes to Disneyland, Such Heavenly Creatures [based on the Parker-Hulme Murder Case], Join Us! Join Us! Join Us! [inspired by The Jonestown Massacre]), animation (Venom 1967 [a parody of the Spider-Man 1967 cartoon], Eep-Opp-Ork-Ah-Ah! [based on The Jetsons], The New Scooby Doo Movies Guest Starring Linda Lovelace and Harry Reems) and tribute portraits (Toyah-Thunder in the Mountains, Ronnie Spector, Soo Catwoman), and other forms of pop culture (Morgus the Magnificent).

Marina M is also an accomplished photographer, art model, LGBTQ and mental health advocate, film buff and pop culture nerd. Her works are fun, energetic with brightly bold graphic realism and bursts of color incorporating familiar design patterns of known timeless mysticism and occult-like themes. A comic-like sense of drawing ability, accuracy and knowledge transformed into her individual portraits of a wide range of people who inspire her and who she draws inspiration from.