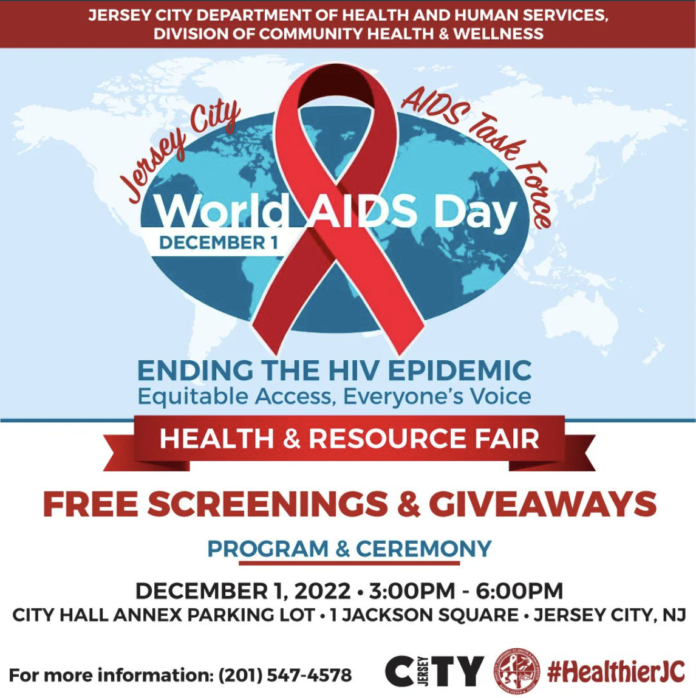 The Jersey City Department of Health and Human Services along with the Division of Community Health and Wellness will be offering free HIV medical screenings and giveaways at the City Hall Annex Parking lot from 3 p.m. to 6 p.m. as today marks HIV World Awareness Day.

Approximately 1.2 million people in the U.S have HIV, with about 13 percent of those individuals not knowing they have it, according to the Centers for Disease Control and Prevention. In addition to this, the latest estimates offered by the CDC on the matter indicate approximately 34,800 new HIV infections occurred in the United States in 2019.

In a Tweet, the city said it is offering free HIV testing at the City Hall Annex Parking Lot.

“We are providing health education and AIDS education to our community,” said Linda Ivory-Green, a coordinator for the Jersey City AIDS Task Force and a longtime advocate against the city’s HIV/AIDS related programs. She said with the offset of infections related to Covid-19 “the pandemic had only exacerbated what had already been there,” referring to people with HIV having underlying health conditions.

According to the New Jersey Department of Health a total of 2,656 cases have been reported with residents living with HIV/AIDS in the latest dataset provided by the department. In total 45 percent are Hispanic, 33 percent are non-Hispanic Black or African American, and 19 percent non-White Hispanic.

Globally, 70 percent of new HIV infections are among people who are marginalized & often criminalized. We can only end AIDS by scaling up HIV services and removing structural barriers & stigma and discrimination of key populations in every country, according to the World Health Organization.

She added that more conversations on HIV/AIDS prevention should be welcomed in combating the spread of the virus such as anti-viral medicines against HIV such as PrEP.

In 2019 statistics from the National HIV Behavioral Surveillance study in Newark showed that of HIV negative persons interviewed only 32 percent had heard of PreP and less than percent had taken PrEP.