Hoboken school board fields questions to start the year

Student safety and community engagement were part of the discussion 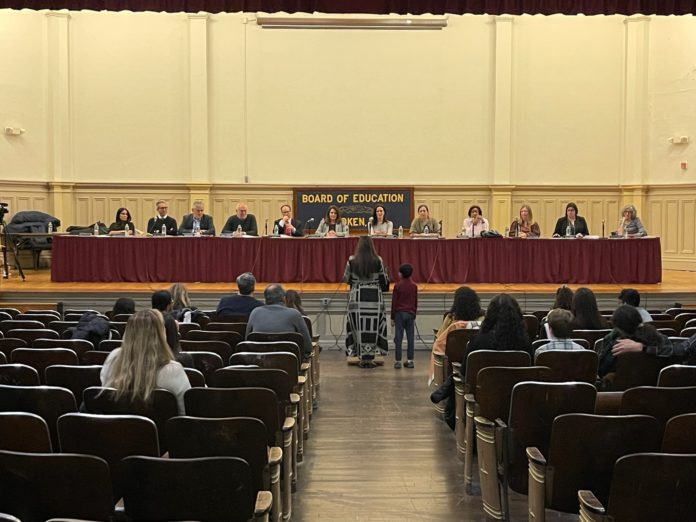 The rejected $241 million new high school, masking policy, and school district procedures in emergencies were some of the questions addressed to the Hoboken Board of Education during its first meeting of the year.

The meeting started off by recognizing students who were nominated for academic and school performance based awards such as Student of the Month for December of last year, followed by a report of some of the activities and student led events from the Hoboken Middle and High School Student Government Representative groups.

Newly elected members from the “Leadership That Listens” slate who won in the midterm elections last year took their seats for the first time. The team consists of Leslie Norwood, Antonio Graña, and Alex de la Torre Jr, who is a current trustee of the board.

A grant from the New Jersey Department of Community Affairs Local Recreational Improvement of “up to $100,000” according to Superintendent Dr. Christine Johnson, is intended for “pool upgrades” for the Hoboken High School, if approved.

She said new equipment would be installed throughout the district’s building complying with the standards of a state statute called “Alyssa’s Law.” She said, “I am happy to say that our maintenance department and our technology staff members worked diligently over the winter break with a vendor to install equipment necessary for our district to comply with this law.”

According to the law, all primary and secondary schools within the State of New Jersey to install a “Panic Alarm” device that can silently and directly notify law enforcement of a life-threatening or emergency situation requiring their response.

The superintendent assured members of the public the installation of these devices were meant towards potential security breaches or active shooting scenarios and said the system would be “running no later than early February.”

Under curriculum items, the state of New Jersey completed the final instruction and program section of the New Jersey Quality Single Accountability Continuum (NJQSAC), which is the Department of Education’s monitoring and district self-evaluation system for public school districts, under a three year performance review of school districts conducted by the state.

A question on masking was brought up in the meeting, in which Board President Sharyn Angley responded, “The board does not see a need to institute a masking policy at this time.” Angley added, “The district continues to operate on the basis of letting our families choose what is best for their child from a masking perspective.

Additionally, a question submitted online by the public on live streaming meetings was raised. Angley said the board would plan on “revisiting this,” but would continue publishing the recorded sessions on their YouTube page.

A question arose about the $241 million 30-year bond issue to create the new high school that failed by a large voting margin.

“The board has said before and will say this again, we will not be making any decisions about a new plan until the public is engaged and their input is taken,” said Angley. “While there is no plan for a new school to be up for referendum at this time the district continues to explore space for our early childhood classrooms.”

Patricia Waiters, who lost running as an independent for a seat on the board, asked clarification on whether the Action Policies approved by the board, listing regulations such as bomb threats, lockdown procedures and active shooters within the school district, would fall under policies or drills.

Angley said the policies are “recognized as regulations.” Waiters asked if the information on Fire and Safety Drill reports were public record.

“What has happened with those regulations is the overall state policy manual organization has moved school districts away from putting process for those safety drills out to the public,” said Superintendent Johnson, “And basically what they’ve said is those processes need to be housed in a district’s safety plan. Meaning that a district is no longer putting in a policy manual or regulations. What steps would be taken if by some chance there were …basically said it goes into a confidential safety and security plan that is reviewed with the police department.”

Waiters expressed her concerns to the board when it came to honoring Martin Luther King Day, on Jan.16.

“You are here to represent all the people and this is when my job get hard. When I got to stand up here and ask you to please reach out to the black and brown people to live in this community for years. Let us know that a day like this that means so much to us count,” said Waiters.

The flag demonstration will take place this Friday at 11 a.m. in front of Hoboken City hall.