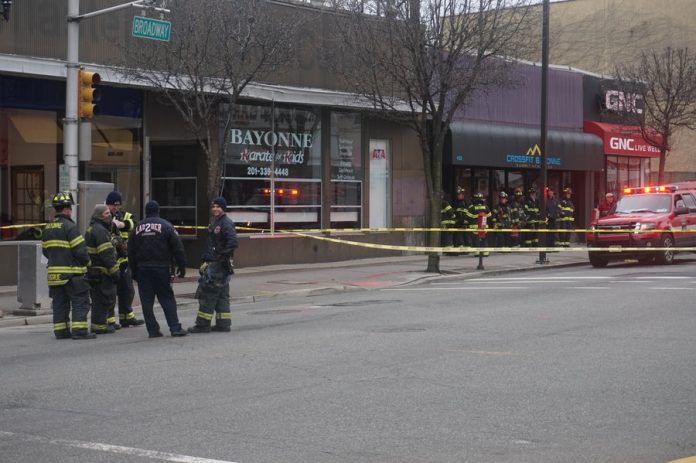 The Bayonne Fire Department responded to a manhole cover explosion on Monday morning, Jan. 23. At least five fire trucks were spotted at the scene. The incident happened on Broadway between 19th and 20th streets, directly outside the Bayonne Go-Cart &Furniture Land Co. It started around 9 a.m., according to a responding officer who requested anonymity. Around 9:42 a.m., the manhole emitted what sounded like another rupture. The Bayonne Fire Department is monitored the situation until it was brought under control. At about 10:15 a.m., PSEG appeared at the scene, according to a firefighter. The reason for the manhole cover explosion could not be confirmed at press time.

Tax abatement all around

At last week’s council meeting, the ten-story, mixed use development planned for where Resnick’s Hardware currently stands on Broadway and 46th Street received a 25-year tax abatement, and a MOTBY developer received a 30-year abatement for a massive complex at Bayonne Bay East. Plans for the MOTBY development, according to the resolution, will be “not less than 500 residential units and up to 850 residential units, common area, up to 10,000 square feet of retail space and associated common areas, amenities, and facilities.” When it is planned to break ground is not yet determined.
The site at Resnick’s, which is being developed by local developer Lance Lucarelli, was approved last year and is expected to be completed sometime in 2018. The 10-story, 107-foot building will house 91 apartments, 150 parking spaces, and retail space on the ground floor.
Tax abatements allow developers to forego local taxes, and instead make payments – 95 percent to the municipality and 5 percent to the county. They are designed to incentivize development by making it more profitable for developers to build, and stay there without the burden of taxes.

The City formally accepted a $900,013 grant from the NJ Department of Environmental Protection for expanded public access to the Newark Bay waterfront. The funding comes from a settlement between the NJDEP and Occidental Chemical Corporation, which is responsible for the various companies that have polluted local waterways for decades, according the text of the grant. Mayor James Davis said in a statement when the grant was first issued in December, “As a peninsula, and as the southernmost point in the county, access to the Newark Bay waterfront and waterway is a huge asset. The funds secured in this grant will assist us in stabilizing our shoreline and improving the public’s access to the same.”

The NJ Hall of Fame announced its newest inductee last week – the Bayonne Bleeder, Chuck Wepner. The induction ceremony will take place on May 7 at the Convention Center in Asbury Park. Wepner boxed in the Marines before turning pro in 1964. He fought some of the best boxers in the world, including Sonny Liston, George Forman, and Muhammad Ali, and was the inspiration for the “Rocky” character on which his famed 1975 Ali fight was based. Wepner was also New Jersey State Heavyweight Boxing Champion.

Two elementary schools were evacuated on the afternoon of January 17 after a truck leaking vapors of the highly pungent chemical, Ethyl Acrylate, was passing through the area, according to Bayonne Fire Chief Keith Weaver.
Linden Police told ABC News that the truck was determined to have a malfunctioning valve that released the vapors.
The truck was traveling from International-Matex Terminals in Bayonne, a bulk liquid storage facility for petroleum and chemicals, to Linden. Officials said the leak of the chemical, which is used to manufacture rubber, poses no health risk.
Twelve children were transported to the hospital, and were treated and released, according to Carepoint representative Jarrod Bernstein. Eleven children were taken by parents or guardians, and one was taken by ambulance.
The two schools, Nicholas Oresko Community School and Lincoln Community School, were open on January 18.

Two Bayonne police officers jumped intothe freezing January waters of the Kill Van Kull the morning of Monday, January 23 to rescue a man who jumped in, according to the Bayonne Police Department.
When Officer Timothy Sullivan and Officer Jeffrey Kaiser responded to an allegation of a dispute at a nearby residence, they found a 28-year-old Jersey City resident displaying “erratic behavior” at Brady’s Dock on East First Street and Lexington Avenue between 8:30 and 9 a.m. The man then walked away from the officers and jumped from a dock into the Kill Van Kull, followed immediately by both officers in full uniform. They successfully brought the victim back to shore. He was then taken to Bayonne Medical Center for treatment for hypothermia.
The Bayonne Fire Department responded and lowered a ladder for the officers to climb out to safety. Both were also transported to Bayonne Medical Center for treatment. No charges were filed against the victim. The incident is still under investigation.

Beginning at 3 a.m. on Saturday mornings and continuing through 3 a.m. on Monday mornings on the weekends of January 28-29 and February 11-12, Hudson-Bergen Light Rail service will be temporarily suspended due to construction on the NJ Turnpike 14A project. During this time, buses will replace light rail trains between 34th Street and Danforth Avenue stations. Customers should use a bus bridge being provided at 34th Street, 45th Street and Danforth Avenue stations on the Blue Line bus route on a load-and-go basis. For information, call NJ TRANSIT Customer Service at (973) 275-5555 between 8:30 a.m. and 5 p.m. daily.

In last week’s Bayonne Community News, in a report on historic site designations, the Bayonne Historical Society, a private organization that has no government affiliation, was confused with the Bayonne Historic Preservation Commission, which makes recommendations to the Planning Board and the City Council concerning which buildings and areas should become officially designated as historic. Joe Ryan was mistakenly cited as a commissioner. He is the staff secretary of the Bayonne Historic Preservation Commission and prepares documents for the Commission’s meetings. The web article has been updated to reflect this change.