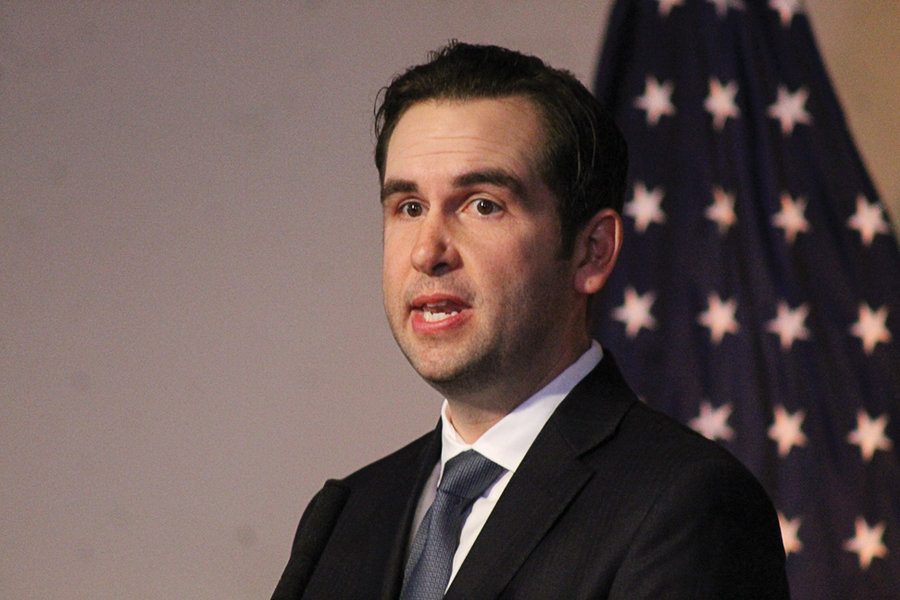 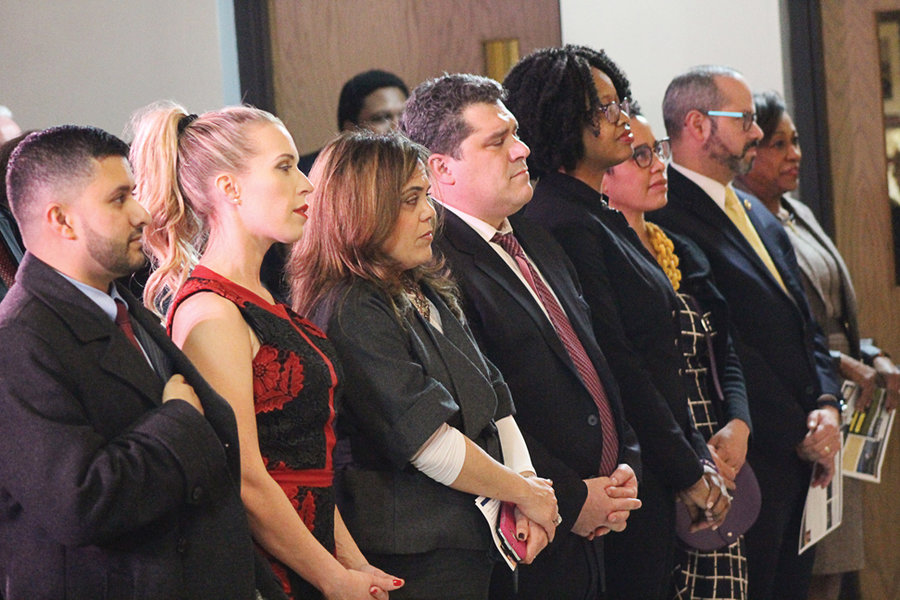 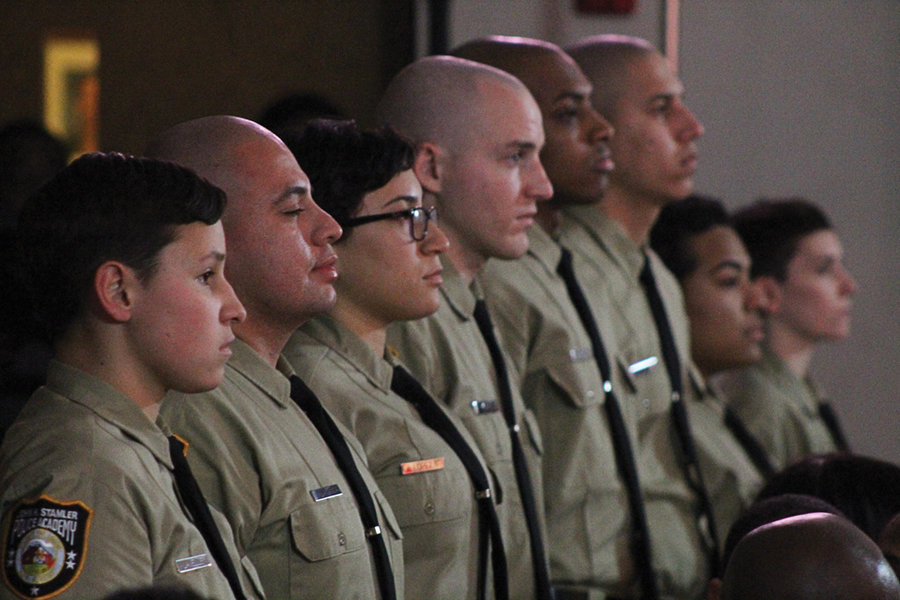 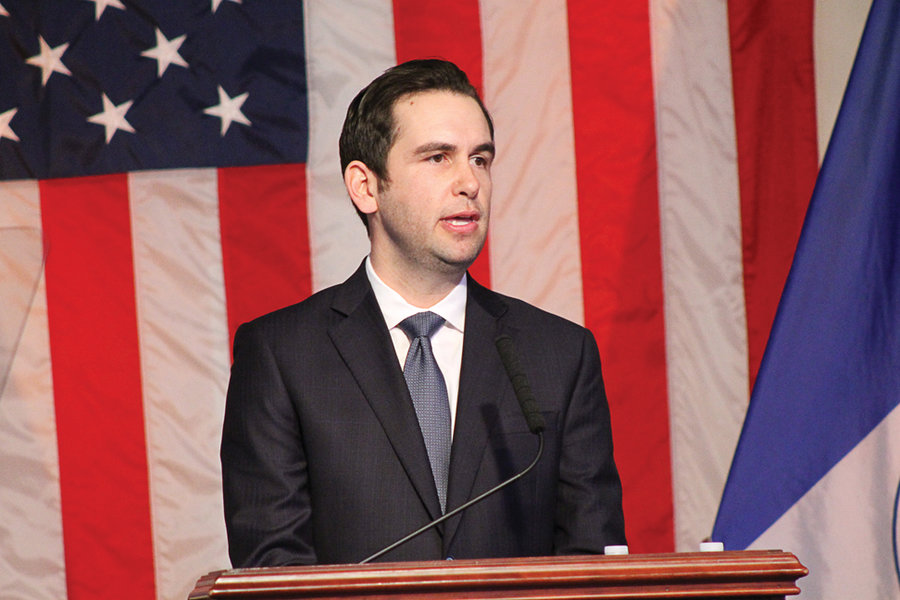 In a room nearly as long as a football field, Mayor Steven Fulop kicked off a marathon series of speeches that in total are meant to serve as his State of the City address for 2017.
“Although required by law to give a state of the city address, Mayor Fulop decided to do one in every ward this year,” said At-Large Councilwoman Joyce Waterman, introducing the mayor at the first of six events on Feb. 7.
Holding the first in the Mary McLeod Bethune Center on Martin Luther King Drive, Fulop came to the heart of the poorest and most troubled section of the city – Ward F. This section of town, which runs from Liberty State Park into the center of the city, is plagued with violence and poverty. It poses the biggest challenges for a municipality that is otherwise seeing the biggest economic boom since Alexander Hamilton helped found it as a port city.

Talked to the crowd

“In July of 2013, I stood in front of City Hall and took the oath of office as the 49th mayor of Jersey City,” Fulop told the standing-room-only crowd. “It was one of the proudest moments of my life, and something I remain thankful for each and every day. As your new mayor, I promised I would work to make you proud, and that is what we have tried to do as an administration for the past three and a half years.”
In an attempt to bring his message to the people throughout the city, he spoke of bringing jobs to city residents and about bringing investment to neighborhoods west of the waterfront.
He said his goal when taking office was to “provide all of Jersey City’s students with the opportunities they deserve.”
“I was passionate about encouraging new businesses to move into Jersey City, and about how small businesses are the foundation of our local economy,” he said. “I talked about my commitment to making Jersey City one of the best mid-sized cities in the country, and while we still have more work to do, I believe we have begun to reach the benchmarks we set out to achieve.”

While dignitaries and public officials gathered inside the center, sirens wailed as police cars rushed up MLK Drive, highlighting the concerns of many residents in the area. There have been 16 reported shootings in Jersey City since the beginning of the year, many of them taking place in this ward. Two blocks from where Fulop spoke, three people were murdered on Jan. 17 in an apparent drug robbery gone wrong.
As if in an effort to show his resolve, Fulop introduced the audience to new police recruits that were soon to be deployed in the city.
_____________
“I promised I would work to make you proud.” – Steven Fulop
____________
“When we first took office in 2013, the Jersey City Police Department was at an all time low of manpower – 779 police officers,” Fulop said. “It was my goal to expand our police force to over 900 officers during our first term, and I am proud to report that the most recent class of police recruits brings our police force to 922 officers, the largest it has been in over two decades.”
Building a safer city begins with building a strong police force, he said.
“I promise we will never stop working towards this goal,” he said. “Many of the police officers that joined the police force in the past year have been placed in the South and West Districts on walking beats on the south side of the city.”
He went on to say that the most recent class of recruits spent their first month of training immersed in the communities they will soon be serving, visiting local organizations, churches and meeting with leaders who were able to give important insight on the types of issues these neighborhoods face.
“It was only a few years ago that we inherited a police department that did not adequately reflect the diversity of our communities. We have come a long way since then, and I am proud that over 70 percent of the officers hired since 2013 have been minorities. This year, we swore in one of the most diverse classes of police officers in the city’s history, and have placed an emphasis on continuing to build a police department that represents the composition of this city.”

The Ward F speech highlighted things specific to the area that included police foot patrols, community policing, the construction of a new City Hall Annex at the central shopping hub on MLK Drive, and the new redevelopment plan for the Jackson Hill area.
But he also pointed to new programs and new open space initiatives such as the city’s new flagship park, Berry Lane Park on nearby Garfield Avenue.
“This year, we plan producing more affordable housing and increasing our police force to help build a stronger Bergen-Lafayette neighborhood,” Fulop said. “Our approach to public safety is comprehensive, and effectively incorporates new technology and community involvement to build safer neighborhoods. However, we also understand the importance of providing economic opportunities that will help to prevent crime.”
This includes second chance programs for previously incarcerated residents that provide education, job and other opportunities that might keep them from returning to a life of crime.
“We remain aware of the need for opportunities for young people who have proactively taken measures to pursue a career. Our ongoing Jersey City Summer Works Initiative, which is now in its fourth year, brings together public sector, private sector, and local nonprofits to provide comprehensive youth employment and enrichment efforts to over 1,000 students a year here in Jersey City.”
The programs he said give young people in our communities a chance to explore different career paths, and learn crucial skills that will help to move them forward.
“We have prioritized recreation and youth involvement programs as a way to keep our city’s students engaged after school, providing pathways to new learning experiences, chances to become involved in the community,” he said. “That is why we have added over 30 new recreation programs and have re-appropriated our budget to include nearly $1 million towards expanding these programs since the start of our administration. This year, through partnerships with the Board of Education and Jersey City Together, we will expand afterschool recreation programming in schools 14, 15 and 29.”
The city, he said, also provides programs for people other than kids. Ward F will also benefit from the city’s approval for the expansion of Liberty Science Center, a $280 million project that will feature a biotech lab, a coding lab, a technology business incubator and a K-12 STEM-focused public school.
“This is truly a transformative project, and one that will establish Jersey City, and Bergen-Lafayette specifically, as the home of the region’s premier innovation destination, as well as educate the next generation of students as leaders in the fields of science and technology,” he said.

“This year, we are committing to over 600 new or preserved affordable units,” he said. “We recently approved a project that will include 54 units of affordable housing in nine scattered sites around the HUB. We want to ensure that the economic revitalization occurring in this area does not negatively impact the affordability of housing within this neighborhood, and we are committed to protecting this balance.”
He said the construction of the new City Hall Annex and the relocation of city jobs to that part of the city will also act as an economic stimulus to the area.
“The local economy is the pulse of any city, and our approach to building one Jersey City starts with strengthening the economies within our neighborhoods,” Fulop said. “It is no secret that Bergen-Lafayette has been a long-overlooked neighborhood when it comes to economic development, which has resulted in a detrimental lack of activity and opportunity, and sometimes a feeling of hopelessness. When my administration first took office, we worked to find ways to prioritize this neighborhood, and saw the importance of investing here. Since then, we have made significant strides in rebuilding this crucial neighborhood, and I know that the future of Bergen-Lafayette has never looked better. Over the coming year, our major focus on public safety and affordable housing in Bergen-Lafayette will continue to move this neighborhood forward in significant ways.”
Al Sullivan may be reached at asullivan@hudsonreporter.com.