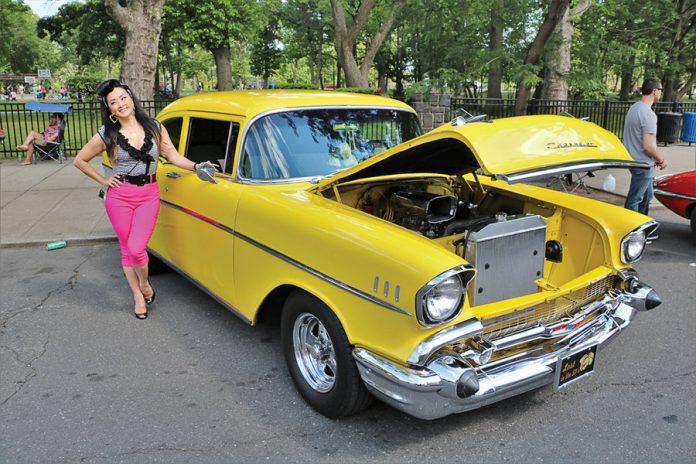 The second annual North Bergen Classic Car and Bike Show was even bigger and better than last year’s popular event. Held on Bergenline Avenue alongside Braddock Park on Sunday, June 25, the show brought about 30 bikes and 200 cars of all shapes, sizes, colors, and configurations to town for an impressive free exhibition on a gorgeous summer day.
DJs kept the music pumping all afternoon, while food trucks offered a variety of taste treats. But the vehicles were the main attraction, with residents and guests peering under hoods and into interiors, and posing for countless photos with their favorites from across the decades.
On display were everything from beloved muscle cars to one-of-a-kind modifications to restored antiques.
Sponsored by Freeholder Anthony Vainieri and the North Bergen Police Department, the show was a fundraiser for the Special Olympics of New Jersey, bringing in over $5,000 for the charity.
And the car owners didn’t go home empty-handed either. More than 20 trophies were given out in categories like best paint job and best engine.
Among the top trophies, the Best in Show award went to Sam Irizarry for his 1955 Chevy pro street; the mayor’s and freeholder’s choice went to Bill Solan for his 1962 Chevy Impala; the Best Truck was awarded to Jason Legette for his 2005 GMC Kodiak; and the Best Import went to Victor Trinidad for his 2017 Subaru WRX/STI.
Among the classics, Debbie Saloman’s 1951 Mercury won first place in the 50s class, and Frank Leone’s 1965 Pontiac GTO took first place in the 60s class. Gilberto Morales’s 1984 Chevy Monte Carlo won the award for Best Interior.
Mayor Nicholas Sacco was on hand to greet the crowd and give out raffle prizes, along with Commissioners Hugo Cabrera, Julio Marenco, and Allen Pascual, Police Chief Robert Dowd, and numerous other township officials.