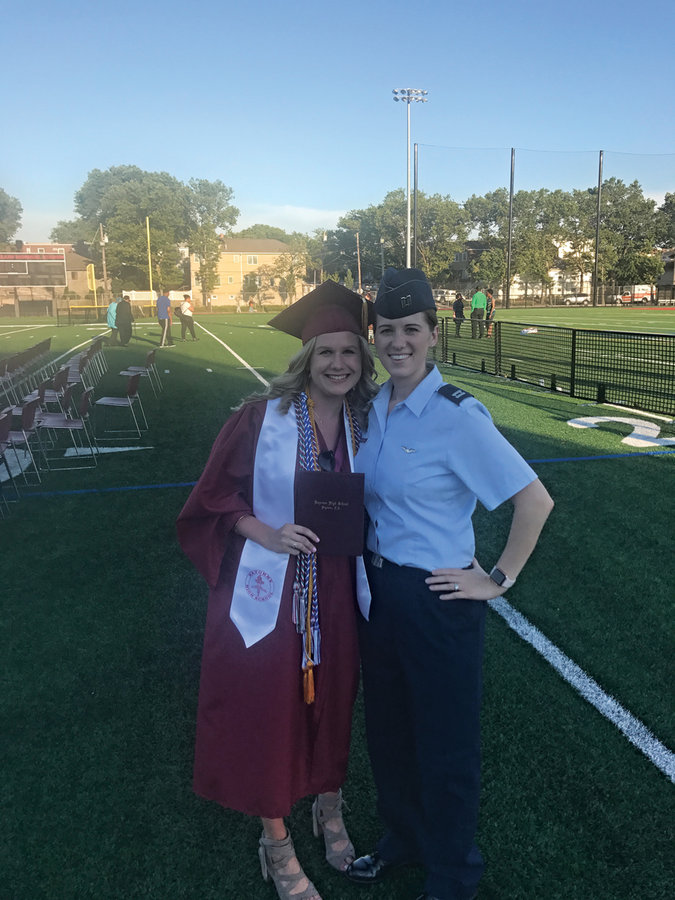 U.S. Sen. Robert Menendez hosted a reception in June in his Newark office to celebrate 20 kids from around the state nominated to prestigious military academies.
Erin Durak of Bayonne was appointed to United States Air Force Academy Preparatory School and Kevin Hernandez of Union City was accepted into West Point Preparatory School.
“Our military academies accept only the best of the best to become the next generation of officers to lead our forces in the protection of our nation and our freedoms,” Menendez said. “I am so proud of these extraordinary young New Jerseyans willing to serve our country. They will represent our state well, and I wish them the very best of luck as they embark on this new adventure.”
At his graduation from Union City High School, Hernandez, led the auditorium in singing the National Anthem and gave a few words to his classmates.
“We are all America, because we are all striving for a better tomorrow,” Hernandez said, “never forgetting how lucky we are to be in a country others will never see. We are America not because we are the people who have the right to do what we want, but the people who have the opportunity to do what is right.”
Durak, a graduate of Bayonne High School, was nominated to the academy by Menendez and Rep. Donald Payne Jr.
During her high school career, Durak was a member of the Bayonne High School Academy for Fine Arts and Academics, National Honor Society, Rho Kappa National Social Studies Honor Society and the Italian Honor Society. She received the Future Diplomat Award during the 2017 BHS Commencement.
Durak also participated in a number of athletic and extracurricular activities, including International Model United Nations, We the People Constitution Competition, BHS varsity soccer, and the basketball and track teams.
Durak is a member of the Jersey City Civil Air Patrol and has interned at Morristown Municipal Airport.

_____________
“I had a lot of support from my teachers at Bayonne High School. Every teacher I crossed paths with had an impact on me, also my mentors and senior members from the Civil Air Patrol squadron in Jersey City.” – Erin Durak
____________

The U.S. Air Force Academy Preparatory School, popularly known as the “Prep School,” prepares a diverse group of cadet candidates to succeed and lead at the Air Force Academy. Students at the prep school are addressed as “cadet candidates.” Each year, approximately 240 students between 17 and 22 years old begin the program in late July.
The school’s program emphasizes the same core four areas as the academy.
First, the academic program is rigorous and specifically designed to transition students from a high-school academic environment to the world-class collegiate academic program at the academy.
The second core area, military training, is centered on the Air Force Core Values of Integrity First, Service Before Self, and Excellence In All We Do. Military training is a part of a cadet candidate’s everyday life.
The third key area is athletics. The school’s athletic department’s mission is to prepare cadet candidates for the rigors of athletic competition and the physical conditioning required of all cadets. The Prep School athletic program also provides cadet candidates with a realistic leadership experience in a mentally and physically challenging environment.
The fourth core area is character development, the process that builds and reinforces the traits which form a cadet candidate’s commitment to personal excellence and produces quality officers to lead the Air Force. Implementation of this program is through a 10-month comprehensive process, which focuses on the Honor Code and character and leadership development.

Durak, who flew to the academy Colorado in early July, replied to questions from the Hudson Reporter about the process and her future goals.
“It was a great honor (to be accepted) and I’m grateful for the opportunity,” Durak said, noting that she aspired to attend the academy when in high school.
“At the very beginning of junior year, I decided it would be a good fit for me,” she said. “Knowing how rough college applications were going to be in the future I started thinking ahead. Many people know for a long time that they want to attend a military academy. But I became interested in the fall of junior year, applied to USAFA summer seminar, and went out to Colorado the end of my junior year to immerse myself in the lifestyle.”
She said she said her siblings were her role models.
“They all have advanced college degrees and solid careers and I can see how their hard work and preparation has paid off,” she said.
She described the application process as “intense.”
“There are doctor appointments, fitness assessments, interviews, questionnaires, and so on. It takes a lot of time and patience to complete. In addition to that I had applications and interviews to complete with congressional staffs,” she said. “I was fortunate to receive two nominations, one from Senator Menendez and one from Congressman Payne Jr.”
She hasn’t yet determined what her ultimate goal is.
“I want to do good work, whatever that is. And that good work will involve serving the United States, so I think it’s pretty solid.”
Were there teachers or others who you can look back to as helping you along the way?
“I had a lot of support from my teachers at Bayonne High School. Every teacher I crossed paths with had an impact on me, also my mentors and senior members from the Civil Air Patrol squadron in Jersey City.”
She added: I think more people should be aware of military academies and what their purpose is. I want more kids to have the opportunity that I have.”