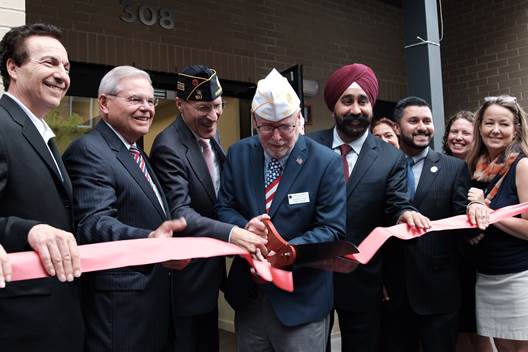 The rebuilt post now includes six units of housing for homeless veterans in the same building, one of the first posts to do so.

“There is one word that should never be used with the word veteran and that’s homeless,” said Carey. “Thank you to all of the elected officials, members of the American Legion, community members, and supportive businesses who helped us make this project a reality.”

“The completion of this new headquarters – including housing for homeless vets and a community center – is yet another milestone in Post 107’s storied history as one of the American Legion’s longest-serving, most distinguished chapters,” said Menendez.  “Serving our veterans is about more than just saying ‘thank for your service.’  It’s about delivering on the promise of a grateful nation.  It’s about providing our service members with the health care, education, and services they need to thrive at home …. And it’s about ensuring that no veteran who served our country spends each night sleeping under a bridge or on a bench.”

“As elected officials, we have a moral obligation to ensure the men and women who honorably defended our country at home and abroad have a place to sleep along with critical supportive services, and I’m proud to say Hoboken has stepped up to the task,” said Bhalla. “This historic grand opening is a perfect example of what can happen when all branches of government work together for a noble cause. Thank you to the dedicated members of Post 107, especially Commander Carey and Mark Villamar, who fought tirelessly until this project was complete.”

The new meeting hall for the American Legion, as well as the additional six units, are now elevated from the ground level to protect the building from flooding. During Hurricane Sandy, the original garage-like post was flooded with roughly six feet of water.

“I remember seeing the devastation of the Hoboken American Legion post after Superstorm Sandy,” said former Mayor Dawn Zimmer. “I am so glad that working together we were able to facilitate not only rebuilding in a more resilient way, but also to provide essential affordable housing for our veterans through a partnership with the Hoboken Shelter. This collaborative effort represents a model that I hope other communities will follow to provide affordable housing for the men and women who served our country.”

The Hoboken Shelter will partner with the American Legion Post 107 to offer supportive services to the homeless veterans, with the goal of eventually moving them to their own homes.

“We have pledged that no veteran in Hudson County should be homeless,” said Hudson County Executive Tom DeGise. “These units within American Legion Post 107 in Hoboken, supported with County HOME funds, give us one more way to help meet that pledge. I want to thank Mayor Bhalla, Mayor Zimmer, Mayor Turner, their respective city councils, our state legislative delegation, and the outstanding leadership of Post 107 who worked arm in arm to restore Post 107 in the wake of the damage caused by Superstorm Sandy and help the Post become an even greater resource for our veterans.”

Zimmer and DeGise signed on to the Mayors Challenge to End Veteran Homelessness issued by former First Lady Michelle Obama in 2014.

In 2015, the American Legion, assisted by Monarch Housing, applied for and received six vouchers for homeless veterans from the New Jersey Department of Community Affairs (NJDCA).

Funding was also secured from the New Jersey Housing and Mortgage Finance Agency (NJHMFA), Hudson County, and the City of Weehawken.

According to the U.S. Department of Housing and Urban Development, more than 40,000 veterans are homeless on any given night and more than 8,500 homeless veterans are in New Jersey.